A stampede that broke out in a southwestern Moroccan town resulted in the deaths of 15 people and five more were injured. The stampede occurred when food aid was being..

A stampede that broke out in a southwestern Moroccan town resulted in the deaths of 15 people and five more were injured.

The stampede occurred when food aid was being distributed in a market, according to the interior ministry.

The Kingdom of Morocco is the most westerly of the North African countries known as the Maghreb - the "Arab West". is a sovereign country located in the Maghreb region of North Africa. Geographically, Morocco is characterised by a rugged mountainous interior, large tracts of desert and a lengthy coastline along the Atlantic Ocean and Mediterranean Sea. Its rich culture is a blend of Arab, Berber, European and African influences.

Morocco was a French protectorate from 1912 to 1956, when Sultan Mohammed became king. He was succeeded in 1961 by his son, Hassan II, who ruled for 38 years and played a prominent role in the search for peace in the Middle East. He also ruthlessly suppressed domestic opposition.

The economy of Morocco is considered a relatively liberal economy governed by the law of supply and demand. Morocco has followed a policy of privatization of certain economic sectors from 1993. These used to be in the hands of the government. Morocco has become a major player in African economic affairs, and is the 5th African economy by GDP (PPP). The World Economic Forum placed Morocco as the 1st most competitive economy in North Africa, in its African Competitiveness Report 2014-2015. 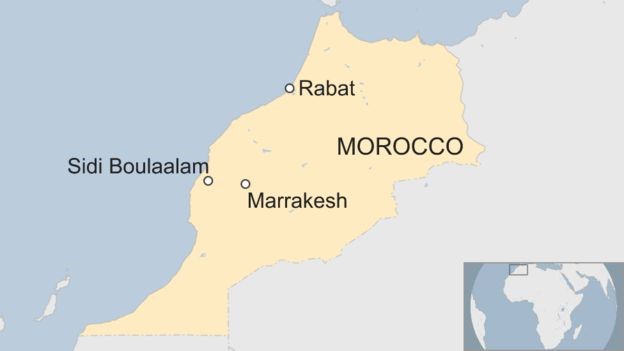 A stampede that broke out in a southwestern Moroccan town resulted in the deaths of 15 people and many more have been injured. The stampede occurred when the government was distributing food aid in a market, according to the interior ministry.

A report in Reuters stated that the death toll was likely to increase. The media outlet said that a hospital source put the death toll at 18. The stampede occurred when a rich man, who has not yet been identified was distributing food. Most of the victims were women and over the age of 40. They reportedly began to scramble in a bid to get food in the small coastal town of Sidi Boulaalam.

King Mohammed VI has given instructions that "all measures be taken to help the victims and their families," the ministry said. The king will pay for the hospitalization of the injured and burials of the dead, the statement said.

The rich donor has previously organized similar donations in the past but they have never resulted in stampedes. A witness stated that more people showed up this year than in the past iterations. "This year there were lots of people, several hundred people," a witness who asked to remain anonymous told AFP news agency. "People shoved, they broke down the barriers," he said, adding that the injured had been evacuated to a hospital in Marrakesh.

King Mohammed VI dismissed the ministers of education, planning and housing and health after an economic agency found “imbalances” in implementing a development plan to fight poverty in the northern Rif region.

At least another 40 women were reportedly injured as the private charity struggled to contain the crowd. The food aid’s value had been about $16 per person.

Our assessment is that poverty needs to be addressed as inequality is one of the reasons why a stampede broke out in the midst of food distribution drive. Estimates show that there are still 1.6 million Moroccans who suffer from abject poverty with a further 4.2 million considered vulnerable. Top 10 % of Morocco’s richest households spend 105 times more on leisure and 44 times more on traveling than poorest Moroccans. There have been concerns expressed by citizens over the implementation of development programs in the country’s poorest regions.