A research facility in Inner Mongolia has successfully tested an experimental drone at an altitude of 25km. China is developing high altitude spy drones that are highly..

A research facility in Inner Mongolia has successfully tested an experimental drone at an altitude of 25km.

China is developing high altitude spy drones that are highly advanced and can operate in near space.

Near space is the region of Earth's atmosphere that lies between 20 and 100 km (65,000 and 328,000 feet) above sea level. It encompasses of the stratosphere, mesosphere and the lower thermosphere. The parameters of what constitutes as near space has varied even among researchers and scientists. However, is it generally accepted that near space comprises of altitude higher than where commercial airlines from but is below orbiting satellites.

A high-altitude long-endurance drone is an unmanned aircraft that flies at altitudes higher than about 60,000 ft. and can remain airborne for long periods of time. The Northrop Grumman RQ-4 Global Hawk which is a US build can fly at altitudes of up to 65,000 ft. It can also remain functioning in that altitude for over 35 hours. It is currently the highest-flying and longest-endurance unmanned aircraft to see extensive use. However, it is limited to an altitude of about 19km.

The area is of interest for military surveillance purposes, scientific study, as well as to commercial interests for communications, and tourism. Craft that fly in near space include high-altitude balloons, non-rigid airships, rockoons, sounding rockets, and the Lockheed U-2 aircraft.

Many argue that the next space race between nations of the world will not be deep space but in near space.

China was late to the space race -- it didn't send its first satellite into space until 1970, just after the United States put the first man on the moon. But in the decades since, China has pumped billions of dollars into research and training. On 2 June 2017, the second launch of China's new-generation Long March-5 carrier rocket failed dealing a blow to the country's ambitious space aspirations. In the same month, China Aerospace Science and Technology Corporation flew a large, solar-powered drone at an altitude of 20,000 metres for 15 hours. 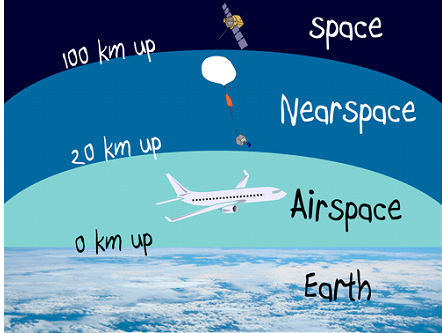 Until recently near space wasn’t regarded feasible for drones. This is because electronic equipment end up failing in that altitude. Chinese scientists are now working on developing a durable near space vehicle capable of observing large areas for weeks, months or even years on end.

To that effect, a research facility in Inner Mongolia successfully tested an experimental drone at an altitude of 25km. Yang Yanchu, lead scientist of the project with the Academy of Optoelectronics at the Chinese Academy of Sciences in Beijing said, ““It shot out like a bullet. The goal of our research is to launch hundreds of these drones in one shot, like letting loose a bee or ant colony.”

Yang Chunxin, a professor at the school of aeronautic science and engineering at Beihang University in Beijing, said there were still many challenges in developing high altitude drones. “One of the biggest headaches is the near-vacuum environment, where electric currents can produce a spark. This can lead to shortages and damage electronic equipment. This is why high altitude drones are more difficult to build than lower-flying variants. Whether they can play a practical role in military operations remains an open question.”

The drones that have been developed by the Chinese team are small enough to fit in a shoebox and weigh very little. They are made with composite materials and are designed to withstand the forces involved in electromagnetic launches. The team has insisted that these drones do not carry cameras.

Yanchu, however has admitted that China is relatively a newcomer even in the near space race across the world. Scientists in space stations like NASA have invested heavily in this technology. Yanchu, however, points out that the technological advancement made by China despite its late arrival has put it ahead of most other countries. He stated. “We expect to achieve some major breakthroughs by 2020. They will be stepping stones towards massive applications.”

Our assessment is that China’s progress in developing high altitude drone technology should a source of concern for nations that view it as a threat. The military implications of near space are massive. They are also likely to be a security concern for all nations like India that share a border with China.