The Spanish government, which has suspended Catalonia’s autonomy, has revealed that it may arrest sacked Catalan leader Carles Puigdemont in the next two months.

The Spanish government, which has suspended Catalonia’s autonomy, has revealed that it may arrest sacked Catalan leader Carles Puigdemont in the next two months.

In the 9th century, the county of Barcelona formed along with several other counties. This was done due to efforts by Charlemagne to establish a buffer zone between his Frankish Empire and Muslim-ruled Spain. The first mention of the word Catalonia can be traced back to the 12th century. Catalonia has been settled by the Phoenicians, the Etruscans and the Greeks.  It has a rich ancient history that also includes settlements by the Romans, who built more settlements and infrastructure. Catalonia remained a part of the Roman Empire until fifth century. It was only in 13th century, when the institutions of Catalan self-administration were formed.

In the 19th century there was rise in Catalonian national. It was at the forefront of industrialization in Spain and experiences a cultural renaissance. There was also an effort to revive Catalan culture and language. In 1922, Francesc Macià, the 122nd President of Catalonia founded the independentist party Estat Català. During the Spanish Civil War, General Francisco Franco abolished the region’s autonomy. It is currently designated as a nationality by its Statute of Autonomy.

In 2014, a non-binding Catalan self-determination referendum was held. Over 80% of the people voted in favor of independence. The momentum for an independent state once again began to build in 2017. A vote for the region’s secession was held on October 1st, 2017. Out of 5.3 million registered voters in the region, more than 2.2 million people voted, according to Catalan officials. Just under 90% voted in favor of secession.

Catalonia is one of the most affluential regions in Spain. Its per capita income is higher than majority of the country. It’s GDP is $255.204 billion. It also exports more goods that any other region in Spain. Thus, it is highly valuable for the nation. On the other hand, Catalonia might struggle without Spain’s aid as well. Despite its wealth, the region also happens to be the most indebted autonomous region in Spain. Out of every seven Euros in the region, around five Euros are owed to the Spanish government. 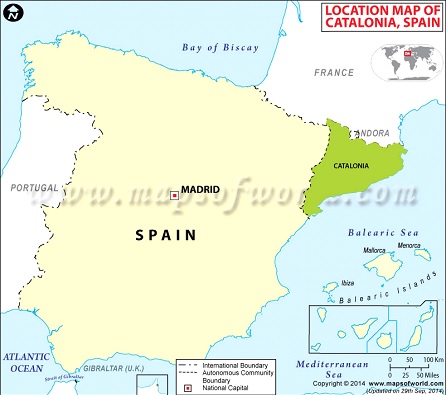 Spain main government has taken a hard line against the Catalonia and has refused to engage in diplomatic discussions. The government made it clear that if Catalonia declared its independence, then it would invoke Article 155 of the country's constitution.

With the threat of losing its autonomy looming over its head, the regional Parliament of Catalonia voted to declare its independence. Seventy legislators voted in favor, 10 voted against, while two cast blank ballots. This triggered another constitutional crisis in the country. Madrid said that the move was illegal and Spanish Prime Minister Mariano Rajoy announced the dissolution of the regional Catalonian Parliament. The government has also removed Carles Puigdemont, the Catalan leader. Spain has also ordered fresh elections to be held on 21st December. However, if Puigdemont is not jailed, then he will be able to run in the elections. Spain's foreign minister, Alfonso Dastis, defended Madrid’s position noting, “We are not taking autonomy away from Catalonia. We are just re-establishing it, in fact. Reality is already sinking in, will continue sinking in and they will realize that they cannot do something without the authority of law and they will be usurping authority.”

There have been pro-independence and pro-unity marches taking place across Catalonia depicting the deeply divided psyche within the public. On October 29th, a pro-unity demonstration, which was convened by the anti-independence group Societat Civil Catalana, saw a huge crowd mass in central Barcelona. Organizers said that at least 1.3 million participated but the city’s police said 300,000 turned out.

Puigdemont meanwhile has said that efforts would continue “to build a free nation”, adding: “We must do so resisting repression and threats, without ever abandoning, at any time, civic and peaceful conduct.”

There is an additional crisis brewing in the region. It is unclear over what the leadership would look like over the next 53 days until the December elections. The Spanish government might micromanage Catalonia from Madrid or it could allow Catalonia to essentially govern itself.

Belgium’s Migration Minister, Theo Francken, has stated that the nation might offer Puigdemont asylum should he seek it. He said, “If you see the situation at the moment, the prison sentences and the repression from Madrid and the prison sentences that are bandied about... the question is obviously whether somebody like that has the chance of a fair trial.”

Our assessment is that Monday will be key in assessing whether Spain’s direct rule will be successful in Catalonia. That’s because politicians and civil servants are set to return to work. Their actions (in case they decide to boycott), will decide whether they will accept direct rule imposed by the central government to stop the region’s independence bid. This political crisis is likely to cause deep political fractures within Catalonia and Spain in years to come.