The role of microcredit in building entrepreneurship for poverty elevation The Synergia Forum, in February 2017, saw the coming together of people from all walks of life..

The key speaker for the conference was Dr. Mohammad Yunus and prominent personalities including CEO’s of various organizations, eminent journalists and representatives of NGO’s shared their valuable insights.

Dr. Mohammad Yunus, who was awarded the Nobel Peace Prize for founding the Grameen Bank and pioneering the concepts of microcredit and microfinance, put forth his vision of a world without poverty and suffering by advocating the “three-end solution”. i.e. zero poverty, zero unemployment and zero net carbon emission. Mr Prasad Chandran, commenced the discussion by introducing the idea of social enterprise. He mentioned the establishment of Yunus Social Business in India, a corporate action bank and the inauguration of two funds; one in Mumbai and the other in Bangalore.

According to Dr. Yunus, the key issue which plagues the world today is concentration of wealth. His concern regarding the sharp decline in the number of people who own more wealth than the bottom 50% of the population, in the entire world from 62 individuals last year to 8 this year impressed upon the house the enormity of the situation. He ascribed this disparity to an economic machine which gathers wealth from the workers and channels it to the wealthy few at the top- this would lead to conflict between and among the spheres and its actors. 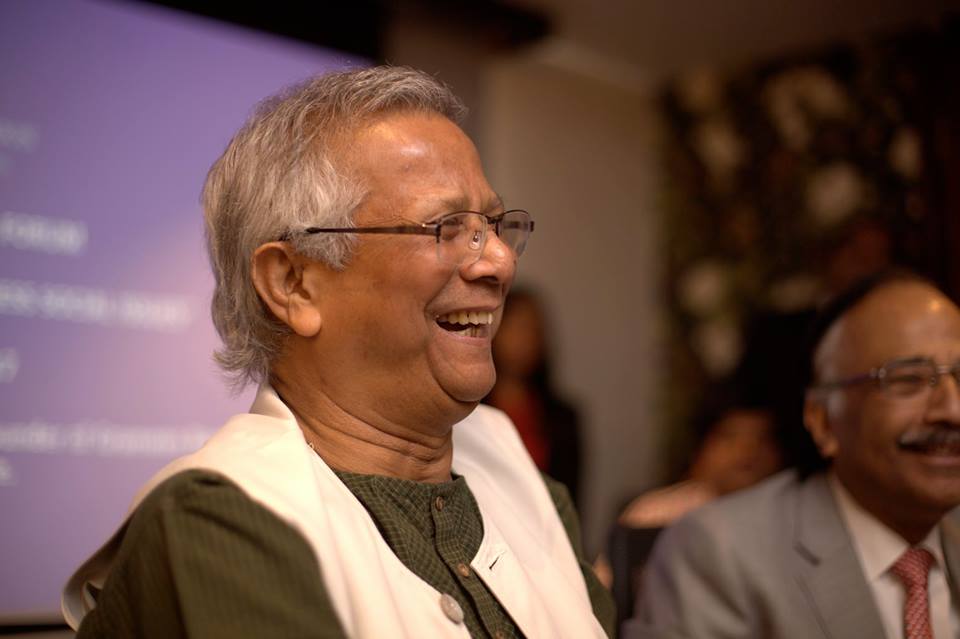 Humans are a creative “independent entity” with the ability to become entrepreneurs, he said. Thus, he believes that instead of reducing ourselves to “small little robots to fit into slots” we can use our creativity and become entrepreneurs. To facilitate this rediscovery and reconstruction of oneself by tapping one’s inherent creativity, financial assistance becomes a crucial factor. He pointed out that the financial system often works only for the privileged, depriving other people of its benefits. This is where the idea of microcredit bridges the gap.

Microfinance provides people the economic oxygen which makes them economically active and turns them into entrepreneurs. Micro credit is not about job creation as popularly known but is about entrepreneurs. Dr. Yunus confirmed that “you can lend money to poor people and you will get your money back and you do it in a sustainable way”. Microcredit has proven itself to be effective under all circumstance and economic situation not only in Bangladesh but also in the US within the same framework.

For this purpose, he mentions the creation of the three zeros’. First is zero poverty - by providing economic oxygen to the people. Second is zero unemployment - using our inherent creativity and becoming entrepreneurs. The last zero is that of zero net carbon emission - which focuses on minimal emission carbon dioxide. By aiming at these zeros, not only do we ensure a brighter future for tomorrow but also a self-sustaining system.