International community and organizations have expressed outrage against the modern day practice of slavery and autions taking place in Libya. Libya is an oil-rich country..

International community and organizations have expressed outrage against the modern day practice of slavery and autions taking place in Libya.

Libya is an oil-rich country in North Africa whose geography is mostly desert land. It has the 10th-largest proven oil reserves in the world.

After being ruled for centuries by Carthaginian, Byzantine and Ottoman empires, Libya was colonized by Italy in 1911. When Italy was defeated during the World War II, the future of Libya was uncertain. Eventually it was decided that Libya would be a monarchy and the rule was handed to Sayyid Idris, Emir of Cyrenaica.

Libya has been in a state of political unrest since the former President of Libya, Muammar Gaddafi was killed in 2011. The two rival factions in Libya, General National Congress (GNC) under Nouri Abusahmain in Tripoli and the 2014 democratically elected House of Representative (HOR) in Tobruk under Aguila Saleh Issa, are currently in a tussle to assume total power over the state. Internationally, it is the Tobruk government that has been recognized as the official government in Libya.

The HOR, strongest in eastern Libya, enjoys the support of the Libyan National Army and has received support from Egypt and UAE. While the GNC is backed by Sudan, Turkey and Qatar. Tobruk is being backed by a military group called Operation Dignity, which is a coalition of eastern tribes and Tripoli has the support of Operation Dawn, an alliance of Islamic forces.

Neither of the rival groups has been able to gain full territorial control or gather popular support. The real power lies with the armed groups that have taken over political order and essentially also the law. Islamic extremism has been present in the eastern province of Cyrenaica for long and the Libyan Islamic fighting group has been trying to gain political power. Additionally, the emergence of the Islamic state militant group has further increased the criminal activities in the region. In February this year, Libya was attacked twice by the ISIS.

Given the lawlessness that informs the region, criminal activities such as cross border smuggling and human trafficking have become widespread. Women from sub-Saharan Africa have been trafficked to Libya for forced prostitution. According to IOM, around 350,000 have been internally displaced in Libya.

In 2014, the United Nations Support Mission in Libya (UNSML) launched an initiative to bring together the rival groups and establish a National Unity Government. However, peace talks have ultimately been unsuccessful. 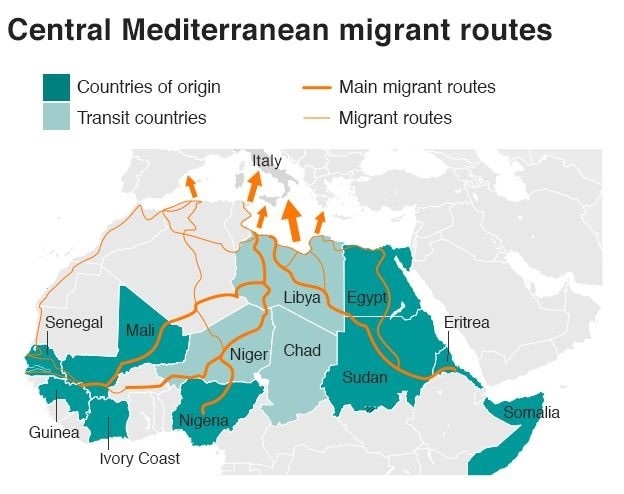 An investigation by CNN revealed footage of a slave auction taking place in Libya in November 2017. The footage shocked the global community with governments across the world urging for a resolution. United Nations Secretary-General António Guterres also called on the authorities to urgently investigate the situation and bring the perpetrators to justice after reports emerged of slave trade taking place in Libya.

Authorities in Libya have said that claim more support is required from the global community to tackle the issue. The United Nations-backed Libyan Government of National Accord, or GNA, said that Libya "is going through difficult times which affected its own citizens as well. It is, therefore, not fair to assume responsibility for the consequences of this immigration, which everyone unanimously agreed that addressing this phenomenon exceeds the national capacities," the GNA statement read.

"We affirm again that the practical solution is to address the real reasons that drive people to leave their home countries, treat them and develop final solutions for them," it continued. Libyan authorities have launched a formal investigation into slave auctions. A high-level committee has been convened encompassing representatives from all the security apparatus to oversee this investigation," Anes Alazabi, an official with the internationally recognized government of Libya's Anti-Illegal Immigration Agency, told CNN. "Priorities of the investigation are not only to convict those responsible for these inhumane acts, but also to identify the location of those who have been sold in order to bring them to safety and return them to their countries of origin."

The AU chairman, President Alpha Conde of Guinea, demanded prosecutions over a "despicable" trade "from another era". A mass protest and rally was also organized in Sweden against the alleged sale of African migrants and refugees in Libya. In April, the International Organization for Migration (IOM) said it had gathered evidence of slavery in Libya.

The IOM's chief of mission for Libya, Othman Belbeisi said, “Apparently they don't have money and their families cannot pay the ransom, so they are being sold to get at least a minimum benefit from that. The price is definitely different depending on your qualifications, for example if you can do painting or tiles or some specialised work then the price gets higher.”

Our assessment is that despite efforts to effectively abolish slavery in the past, the inhuman practice continues to exist in the world. According to a recent report, there are as many as 40 million slaves globally and one in four of them are children. The UN along with the international community must come together to address the root cause of slavery, which is most cases is due to poverty.