United Nations Secretary-General António Guterres has called on the authorities to urgently investigate the situation and bring the perpetrators to justice after reports..

United Nations Secretary-General António Guterres has called on the authorities to urgently investigate the situation and bring the perpetrators to justice after reports emerged of slave trade taking place in Libya.

Libya is an oil-rich country in North Africa whose geography is mostly desert land. It has the 10th-largest proven oil reserves in the world.

After being ruled for centuries by Carthaginian, Byzantine and Ottoman empires, Libya was colonized by Italy in 1911. When Italy was defeated during the World War II, the future of Libya was uncertain. Eventually it was decided that Libya would be a monarchy and the rule was handed to Sayyid Idris, Emir of Cyrenaica.

Libya has been in a state of political unrest since the former President of Libya, Muammar Gaddafi was killed in 2011. The two rival factions in Libya, General National Congress (GNC) under Nouri Abusahmain in Tripoli and the 2014 democratically elected House of Representative (HOR) in Tobruk under Aguila Saleh Issa, are currently in a tussle to assume total power over the state. Internationally, it is the Tobruk government that has been recognized as the official government in Libya.

The HOR, strongest in eastern Libya, enjoys the support of the Libyan National Army and has received support from Egypt and UAE. While the GNC is backed by Sudan, Turkey and Qatar. Tobruk is being backed by a military group called Operation Dignity, which is a coalition of eastern tribes and Tripoli has the support of Operation Dawn, an alliance of Islamic forces.

Neither of the rival groups has been able to gain full territorial control or gather popular support. The real power lies with the armed groups that have taken over political order and essentially also the law. Islamic extremism has been present in the eastern province of Cyrenaica for long and the Libyan Islamic fighting group has been trying to gain political power. Additionally, the emergence of the Islamic state militant group has further increased the criminal activities in the region. In February this year, Libya was attacked twice by the ISIS.

Given the lawlessness that informs the region, criminal activities such as cross border smuggling and human trafficking have become widespread. Women from sub-Saharan Africa have been trafficked to Libya for forced prostitution. According to IOM, around 350,000 have been internally displaced in Libya.

In 2014, the United Nations Support Mission in Libya (UNSML) launched an initiative to bring together the rival groups and establish a National Unity Government. However, peace talks have ultimately been unsuccessful. 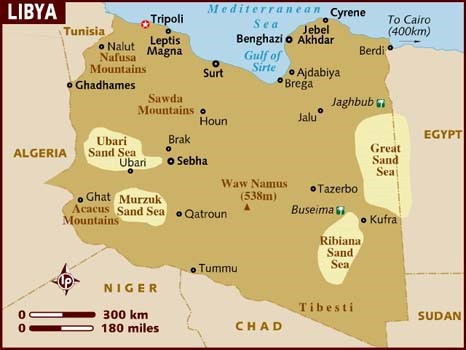 Expressing horror at news reports and videos showing African migrants in Libya allegedly being sold as slaves, United Nations Secretary-General António Guterres has called on the authorities to urgently investigate the situation and bring the perpetrators to justice.

Guterres’ remarks were made after a CNN investigation found a dozen men being sold at an auction outside of the capital, Tripoli -- some for as little as $400. The CNN team had travelled to the region after obtaining footage of a human auction in Libya.

“Slavery has no place in our world and these actions are among the most egregious abuses of human rights and may amount to crimes against humanity,” Mr. Guterres told reporters at a press stakeout at the UN Headquarters, in New York, Monday.

"I abhor these appalling acts and call upon all competent authorities to investigate these activities without delay and to bring the perpetrators to justice," he said. "I have asked the relevant United Nations actors to actively pursue this matter." He also called for addressing migration flows in a comprehensive and humane manner, including through the development cooperation among States to address its root causes, meaningful increase of all the opportunities for legal migration, and enhanced international cooperation in cracking down on smugglers and traffickers and protecting the rights of their victims.

Libyan authorities have launched a formal investigation into the auctions. It is being overseen by the government's Anti-Illegal Immigration Agency. "Priorities of the investigation are not only to convict those responsible for these inhumane acts, but also to identify the location of those who have been sold in order to bring them to safety and return them to their countries of origin," Anes Alazabi, an official with the agency, told CNN.

Our assessment is that human trafficking is one of the worst crimes against humanity. It is imperative for nations across the world to adopt and apply the UN Convention against Transnational Organized Crime and its protocol on trafficking in persons. It is also important to monitor and address migration flows in a comprehensive and humane manner that prevents such crimes from taking place.