The Silk Road of Energy

The pipeline will carry gas from the Caspian Sea to Turkey and Europe via Georgia, thus bypassing Russia.

Azerbaijan is one of the world’s oldest oil producing countries. Since the dissolution of the Soviet Union, Central Asian hydrocarbons have been under the watchful eye of European and Russian leaders. The war from 1988 to 1992 over the Nagorno-Karabakh region altered Azerbaijan foreign policy to shift to the likes of Washington and Europe over Russia. With the support of the US, Azerbaijan turned into an oil exporter from an importer in just two decades. Strategically located at the crossroads between Russia, Central Asia and Europe, Azerbaijan’s shift to the US, forced Russia to shut older Soviet pipelines to the country.  They maintain a foreign policy that relies on the supply of its hydrocarbons.

Azerbaijan’s Shah Deniz natural gas field is located offshore in the South Caspian Sea and is the primary source for renewed European gas supply. Maintaining close ties with Turkey, Azerbaijan signed intergovernmental agreements establishing a consortium to build and operate the pipeline in 2011 and 2012.

TANAP will be the central and largest part of the Southern Gas Corridor project of the European Commission to supply gas from the Caspian to Europe, thereby reducing Europe’s dependence on Russian supply of natural gas. TANAP will run from the Turkish border with Georgia, beginning in the Turkish village of Türkgözü in the Posof district of Ardahan, through 20 provinces until it ends at the Greek border in the İpsala district of Edirne. This project will also include the South Caucasus Pipeline and the Trans-Adriatic Pipeline (TAP). The latter will connect to convey natural gas to European nations. TANAP will account for 1,850km of the larger 3,500km pipeline from Azerbaijan to Italy.

The pipeline is expected to cost $10–11 billion. $800 million of funding has been approved by the International Bank for Reconstruction and Development for TANAP. Overall, TANAP will receive around $3.7 billion in loans, a project which costs around $8.5 billion. In the project, Azerbaijan’s SOCAR (State Oil Company of Azerbaijan Republic) has a 51% stake, Turkey’s BOTAŞ has 30%, BP has 12%, and SOCAR Turkey has 7%. India based Punj Lloyd is among other contractors in this project. 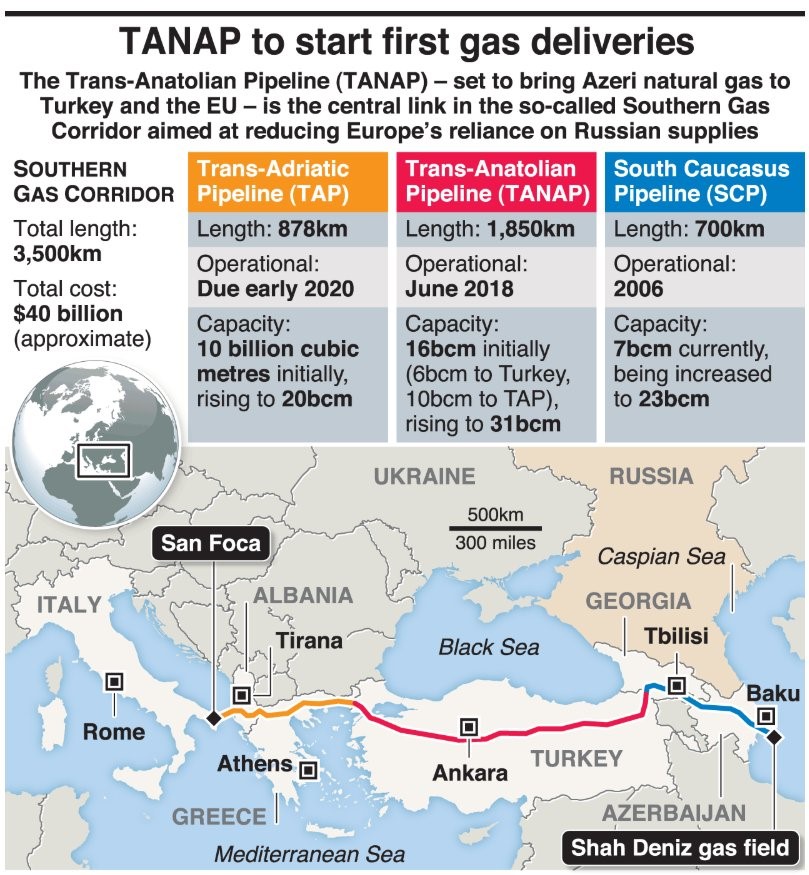 The $8.5-billion pipeline is aimed at turning Turkey into an energy hub and diversifying EU natural gas supplies away from Russia. "Our country is now one step closer to its vision to become a hub of regional energy lines thanks to TANAP," Turkish President Recep Tayyip Erdogan said in the central city of Eskisehir on Tuesday, dubbing the project "the Silk Road of energy.”

The main developmental objective is to diversify Azerbaijan's gas export markets and improve the security of Turkey's and South East Europe's energy supply. The proposed Nabucco Pipeline faced stiff competition from the Russian South Stream which was developed to maintain Europe’s dependence on Gazprom. However, Nabucco was replaced by TANAP.

US and the European Union have been active supporters of the project. "By helping diversify our energy suppliers and routes, the Southern Gas Corridor is strategically important for the EU's energy security, including in the most vulnerable parts, such as Southeast Europe and southern Italy," European Commission Vice President Maros Sefcovic said.

The pipeline will not move through Armenia, even though it reduces the distance, as Turkey has cut off all diplomatic ties with the country. Georgia, on the other hand, has been a close ally of both Turkey and Azerbaijan. The pipeline passes through 20 areas of Turkey and is expected to improve the welfare of the people, according to Turkish PM Erdogan.

According to Reuters, the increase in global natural gas production, the buildup of new gas transport infrastructure, the decrease in natural gas prices, the growth of liquefied natural gas (LNG) trade are all already increasing the options for Europe’s gas importers and reducing the influence of the Russian energy giant Gazprom. The Southern Gas Corridor is fundamental to European politics and energy in order to avoid an energy crisis like that of 2009 when Russia’s Gazprom cut off supplies via Ukraine.

By 2020, the Southern Gas Corridor will bring around 10 billion cubic meters (BCM) – about 353 billion cubic feet – of natural gas from Azerbaijan’s Shah Deniz II gas field to Albania, Italy, Georgia, Turkey and Greece. By 2026 that number will increase to 31 BCM.

Europe’s belief that increasing gas supply from US alongside the TANAP will rapidly alter their dependence on Russia is shrouded in blinded confidence. Russia still maintains close relations with the other Central Asian countries of Kazakhstan, Turkmenistan and Uzbekistan who have already invested in the formation of a Eurasian Union. In the situation that Russia is threatened by European dependence on Azerbaijan, they can call on their allies to influence the supply of gas and, therefore, affect prices.

European countries like Germany are heavily dependent on LNG imports. As Norway’s supply is rapidly declining, Nord Stream II pipeline from Russia to Germany will be crucial for the supply of gas to Europe even after TANAP begins operations.

The EU’s call for market competition is being met with the Nord Stream pipelines which are not operated on public money. Severin Fischer at the Center for Security Studies in Zurich says, “There seems to be no legal basis for Brussels to stop the project, but that doesn’t mean Germany’s neighbors will be happy with the deal.”

Our assessment is that the TANAP pipeline will help diversify energy suppliers and routes for the EU. We believe that the Southern Gas Corridor is strategically important for EU’s energy security including in the most vulnerable parts such as South-East Europe and Southern Italy.