In what has been called a “watershed moment”, the International Maritime Organisation has announced that the global shipping industry will cut carbon emissions in line with the Paris Agreement. The new policy was spearheaded by island nations that will be severely impacted by rising sea levels. However, other countries such as US, Brazil and Panama, have registered their objections.

Climate change is a change in the statistical distribution of weather patterns when that change lasts for an extended period of time. Global warming is the observed century-scale rise in the average temperature of the Earth's climate system and its related effects. Multiple studies published in peer-reviewed scientific journals show that 97 percent or more of actively publishing climate scientists agree that climate-warming trends over the past century are extremely likely due to human activities. In addition, most leading scientific organizations worldwide have issued public statements endorsing this position.

The Paris Agreement is an agreement within the United Nations Framework Convention on Climate Change (UNFCCC) dealing with greenhouse gas emissions mitigation, adaptation and finance starting in the year 2020. As of October 2017, 195 UNFCCC members have signed the agreement.  The Agreement aims to respond to the global climate change threat by keeping a global temperature rise this century well below 2 degrees Celsius above pre-industrial levels and to pursue efforts to limit the temperature increase even further to 1.5 degrees Celsius.

The International Maritime Organization is a specialized agency responsible for the safety and security of shipping and the prevention of marine pollution by ships. Shipping and aviation industries have thus far remained unregulated under frameworks such as the Kyoto Protocol or the Paris Agreement as these agreements are only applicable at a national level.

It has been estimated that international shipping produces more carbon than the country of Germany, approximately 1,000 million tonnes. The shipping industry produces approximately 2.3% of the global total. According to the World Bank, if it was counted as a country, it would be the sixth-largest producer of carbon emissions. If unregulated, it could contribute for 15% of global carbon emissions by 2050.

IMO implemented a design standard for shipping vehicles in 2011, to make vehicles 30% more efficient by 2025. It has a mandatory data collection system for fuel oil consumption of ships, which entered into force in March 2018. 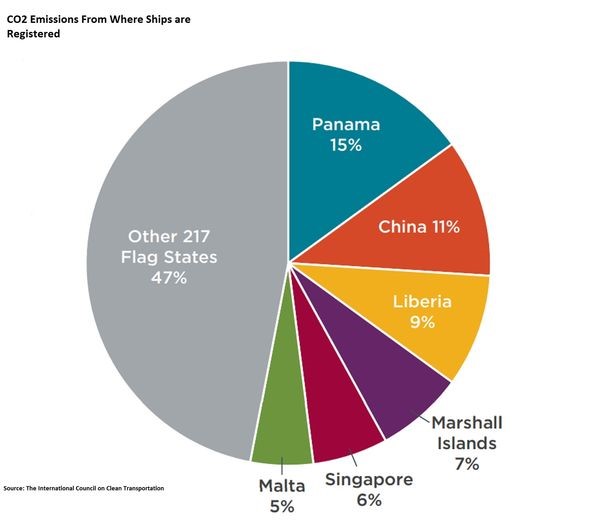 At a meeting of the International Maritime Organisation’s Marine Environment Protection Committee (MEPC) last week, the agency announced a landmark decision to create “a pathway of CO2 emissions reduction consistent with the Paris Agreement temperature goals”. The agency announced that it would commit to reducing 2008 carbon emission levels to 50% by 2050.

“IMO remains committed to reducing GHG emissions from international shipping and, as a matter of urgency, aims to phase them out as soon as possible in this century,” the group said in a press statement. It noted the possibility of addressing emissions through low-carbon and zero-carbon fuels, improved energy efficiency for new and existing ships, and market-based mechanisms. This initial draft is not legally binding, and will be revised in 2023 to assess “new science and available solutions”.

One of the major proponents for the new framework was the Marshall Islands. “While it may not be enough to give my country the certainty it wanted, it makes it clear that international shipping will now urgently reduce emissions and play its part in giving my country a pathway to survival,” President Hilda C Heine wrote on Twitter. Pacific island nations and other low-lying islands are disproportionately affected by rising sea levels and other effects of climate change.

The Marshall Islands and the United Kingdom were supported by some European nations in their proposal to shrink shipping emissions by 70%-100%. “The climate compass is now clear, a low-carbon and resilient future is the only way forward for the sustainability of maritime transport,” said UN Climate Change Executive Secretary Patricia Espinosa.

The decision to implement carbon targets saw strong opposition from a number of countries including Brazil, Saudi Arabia, India, Panama, Argentina, and the United States. Head of US delegation Jeffrey Lantz said, "We do not support the establishment of an absolute reduction target at this time." Last year, the US withdrew from the Paris Agreement. Since election, President Donald Trump has been sceptical about the threat posed by climate change. He has repealed US environment protection orders including the Clean Power Plan.

Other countries, such as Panama and Brazil, claimed that this might adversely impact world trade. Panama noted that “as a developing country that depends on the maritime sector for its progress,” it is “aware that the welfare of its population relies on shipping.” It emphasised the need for greater depth of study before implementing the measures. Brazil pointed out that 90% of international trade is carried by shipping, and that these measures would have a disproportionate impact on economies that are distant from their major markets.  Saudi Arabia expressed concern that the new measures would have an impact on their fuel supply industry.

Our assessment is that that the decision to decarbonise the shipping industry is an important step towards addressing climate change. Short term effects on countries dependant on shipping could be minimised by sharing technologies, and cooperating on research and development for energy efficiency. We have previously stated our belief that the international community must commit itself to the Paris Agreement to ensure global temperatures do not rise exponentially.