Recently two of the largest communist parties in Nepal announced a merger ahead of the national elections. This has sparked concern over whether the nation is..

Recently two of the largest communist parties in Nepal announced a merger ahead of the national elections. This has sparked concern over whether the nation is inching closer to China.

Nepal traces its roots back to ancient civilization. A landlocked country in the Himalayas, the tiny nation shares a border with both India and China. An ancient culture, the nation was closed off from the rest of the world till 1950. Before that the Shah Dynasty had established the Kingdom of Nepal. It also formed an alliance with the British Empire, under its Rana dynasty of premiers. After it ended its isolation with the outside world, Nepal instituted Parliamentary democracy in 1951. In 2008, the Hindu monarchy came to an end after the Nepalese Civil War. Thus, it became a Republic. At the time, it was the oldest Hindu monarchy in the world.

Ties between India and Nepal have traditionally been good. Diplomatic ties were after the two nations signed the 1950 Indo-Nepal Treaty of Peace and Friendship. The two countries share close linguistic, marital, religious, and, cultural ties. The border between India and Nepal is an open boundary, people of the two nations come and go freely. Nepal is a land locked country with India on three sides and China on the northern border.

However, ties between the two nations have strained since 2015. There have been reports of anti-Indian sentiment growing among the citizens as well as the government. Additionally, in September 2015, the Nepali government accused India of imposing an undeclared blockade. This prevented trucks carrying perishables like fruits and vegetables to cross the border into Nepal. This caused an economic and a humanitarian crisis in Nepal. India denied that it had intentionally initiated the blockade. The two countries also have unresolved border issues.

The ties between Nepal and China were initially unenthusiastic. The trade ties have grown significantly since 1975. Since 2016, China has opened 32 border crossing points into Nepal. However, India continues to be Nepal’s key economic as well as security partner. 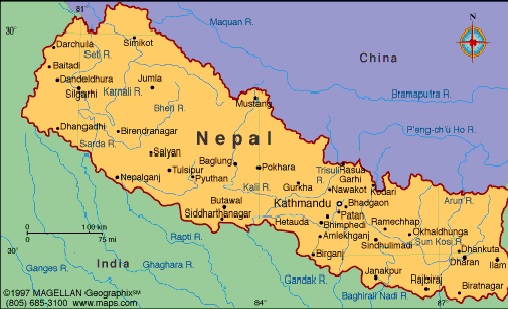 The current President of Nepal is Bidhya Devi Bhandari. She was the vice-chairperson of the Communist Party of Nepal (Unified Marxist–Leninist) before assuming office in 2015. The current Prime Minister Sher Bahadur Deuba belongs to the Nepali Congress. Politically, Nepal is highly unstable. The past decade has seen multiple changes in the government. Ever since September 2015 when the nation adopted a new constitution, four Prime Ministers have come to power and have left as well.

The upcoming federal and parliamentary elections are scheduled to be held on November 26 and December 7.

Before the elections, there was a significant political reshuffle in Nepal starting from October 3rd 2017. The nation’s Communist Party of Nepal (Unified Marxist- Leninist) and the Communist Party of Nepal (Maoist Centre) announced that they have formed a single large communist bloc and would be contesting as one entity. They merged with a smaller Navya Shakti party. They are two of the largest political parties in Nepal.

Even though they have come together to form governments in the past, the formation of a single bloc caught many in the country by surprise. Maoist chief Pushpa Kamal Dahal and CPN-UML chief K.P. Oli announced the merger.  In order to form this new coalition, the Maoist group broke away from the existing alliance with the Nepali Congress. To counter the Communist bloc, the nation’s right wing parties have formed a coalition of their own.

The merger of the two large communist parties will ultimately reflect upon Nepal’s relationship with both India and China (a communist nation).

Pramod Jaiswal, a visiting research fellow at the New Delhi-based think tank Institution of Peace and Conflict Studies said, “Everything that’s happening ... all the political developments in Nepal are always connected to India and China. On economic issues, [the communist parties] feel that China can give them more.”

It is possible that the nation will move towards warmer relations with China as a result. In March 2016, the CPN (UML) chairman KP Sharma Oli, who was at that time the Prime Minister, signed an agreement with China. It was a trade and transit deal that would build a rail link between China and Nepal.

Our assessment is that if the communist bloc wins the upcoming election, there will be repercussions in Nepal’s relationship with both India and China. India will certainly view Nepal’s growing closeness with China with apprehension. However, if China succeeds in replacing India as the key economic as well as security partner, it would have well have created a fissure at the Himalayan border that separates the Indian mainland from China. We have to be mindful that the post earthquake reconstruction efforts bore flags of all major donor countries - India was conspicuous by its minimal presence and China by their over-whelming presence. We have to be extremely vigilant not to loose the battle for hearts and minds of the  Nepali youth. Our common culture, shared border and history is the citadel against a powerful adversary. If we loose the people - to - people connect , then we will surely have China at our gates.