Spurred on by historical animosity and sovereignty disputes, along with a mutually damaging nationalist rhetoric, bilateral ties between Japan and South Korea have been on a downward trend.

In the latest turn of events, Tokyo has rekindled its claim on a contested island in the Sea of Japan, currently controlled by the South Korean government. It has also reacted strongly to a ruling by the Seoul Central District Court that has ordered the Japanese government to pay $91,800 each to Korean ‘comfort women’, who had been allegedly abused by the Japanese military during the Second World War (WWII). 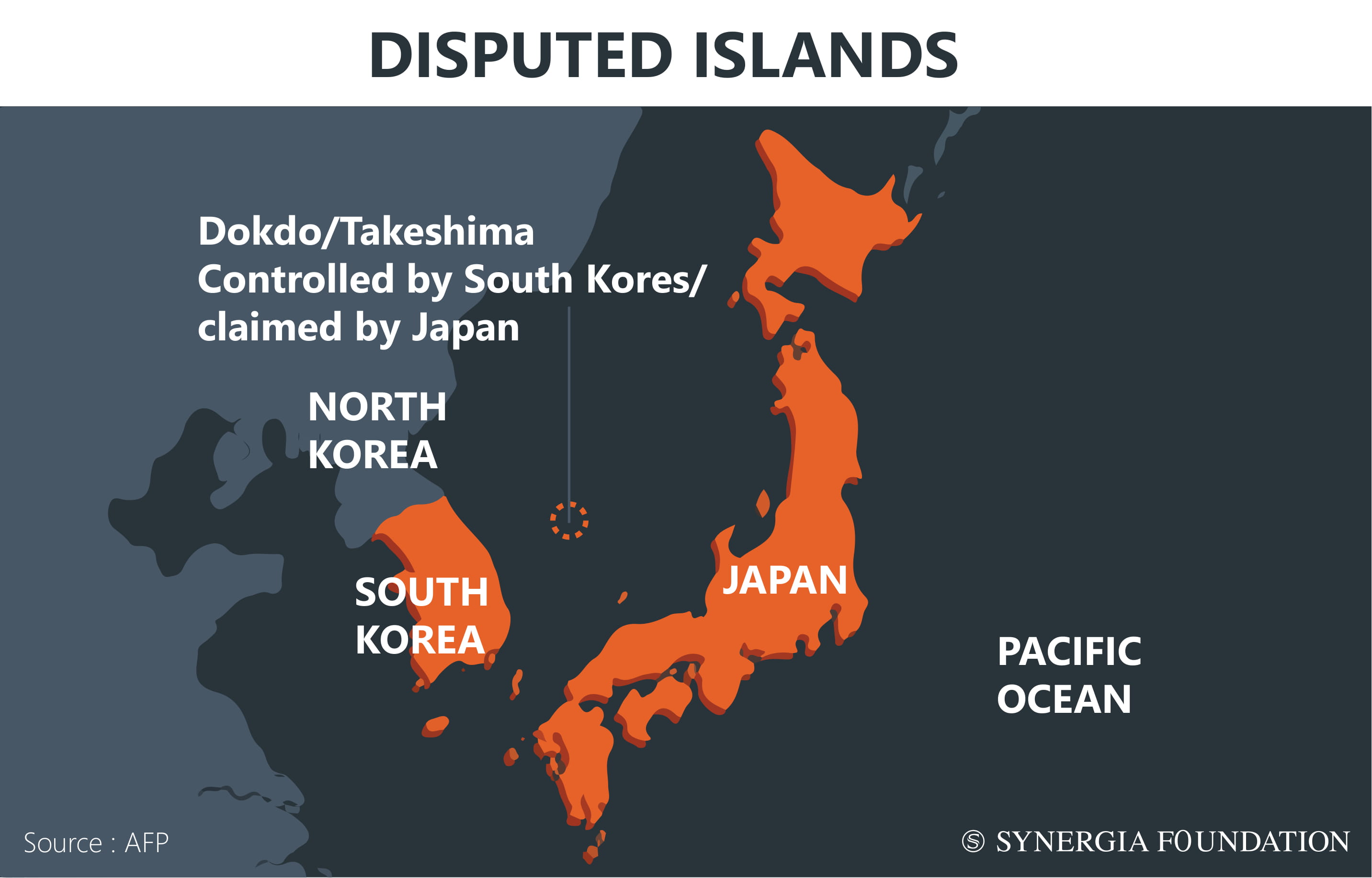 Even as these tensions continue to simmer, South Korean President Moon Jae-in recently issued a conciliatory statement, catching everyone by surprise. On March 1, while commemorating the 102nd anniversary of his country’s independence protest against the Japanese occupation, he reached out to Tokyo in a widely televised address. By adopting a patently pacifying tone, he signalled readiness to sit down and have talks with the Japanese government without the baggage of the past.

This change in stance seems to be reflective of a renewed appreciation in Seoul that Tokyo is critical for trade and investment, apart from being a useful ally in countering shared threats from North Korea, China, and Russia.

HAUNTED BY THE PAST

In the collective conscience of South Koreans, it is not easy to wipe off memories of Japan’s brutal colonisation from 1910 to 1945. The latter’s military had been particularly notorious for forcing thousands of women into sexual slavery (known as comfort women), apart from exploiting the Korean labour force to fuel Japan's war machinery. Even after the end of WWII, it had taken many years for the two countries to ‘normalise’ their relations.

Eventually, the Treaty on Basic Relations was signed in 1965, whereby the Japanese government officially recognised the Republic of Korea. It also provided $300 million as compensation for the South Korean victims of Japanese imperial rule, besides extending an additional $200 million credit to Seoul.

However, the already corrosive relationship between the two sides took a turn for the worse when several ‘comfort women’ survivors in South Korea went public about their ordeals during the Japanese occupation. Although fresh demands were made on Tokyo to accept legal responsibility, it denied the same by arguing that all official compensation claims had been settled in 1965.

Finally, in a major breakthrough in 2015, Japan agreed to contribute ¥1bn towards a foundation that supported survivors and their families. This was, however, subsequently nullified by President Moon Jae-in, who contended that the agreement had not reflected the true wishes of the affected women. Further exacerbating the issue, there was a string of South Korean court rulings in 2019 that ordered Japanese companies to pay reparations to those who had been forced to work in their factories during WWII. Since then, this open wound has continued to fester. 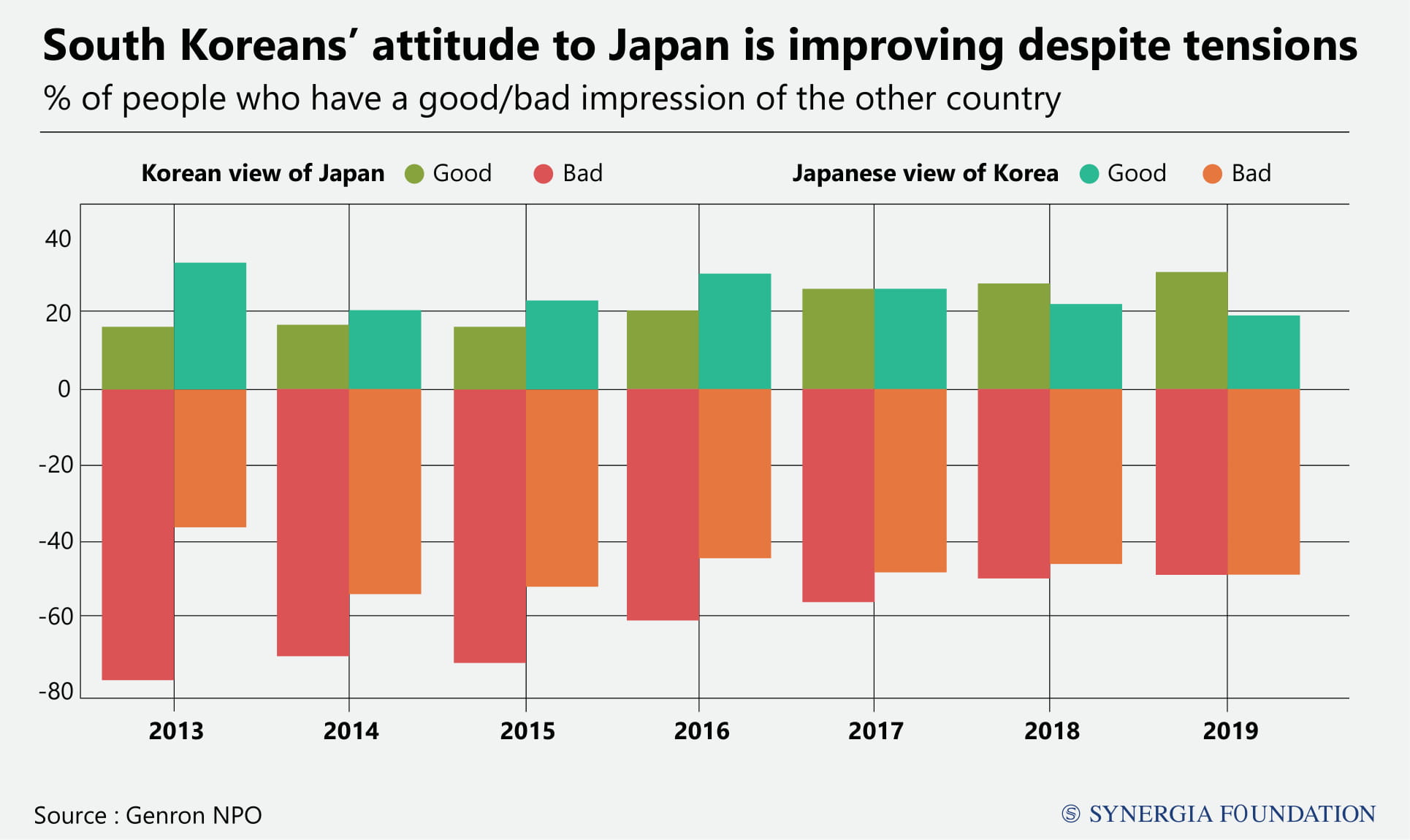 It is important to view the recent spike in tensions against this backdrop. Any new claim for war-time compensation is vehemently opposed by Japan, which views it as a violation of the international principle of sovereign immunity. According to it, all obligations had been finally and irrevocably settled under the 2015 agreement.

In fact, this historic friction has poisoned other aspects of their relationship as well, including economic and political ties. The conflicting claims over ‘Liancourt Rocks’, a group of small islets located between the Korean island of Ulleungdo and the Oki Islands of Japan, is a case in point. Furthermore, Tokyo has introduced a wide range of export restrictions on its neighbour, effectively causing bilateral relations to hit a new low.

Very often, these issues are also exploited for domestic gain. For instance, in 2019, when Mr. Moon Jae-in was plagued by political controversies back home, he had threatened to scrap an intelligence-sharing pact with Japan in a bid to redeem his plummeting approval ratings. In a significant departure from this trend, however, he has now extended an olive branch to the land of the rising sun.

Such a strategically consequential move would not have been undertaken without serious deliberation in Seoul. Many analysts believe that the immediate motivation is to use the Tokyo Olympics as a platform for resuming engagement with North Korea. The government is also keen to ensure that tensions with Tokyo do not impede Seoul's efforts at cooperating with Washington, as the latter charts its peace agenda in the Korean peninsula.

Further, the two countries are members of the Regional Comprehensive Economic Partnership (RCEP) as well as the Comprehensive and Progressive Agreement for Trans-Pacific Partnership (CPTPP). In the near future, they are also expected to conclude a Free Trade Agreement (FTA) between them. Mr. Moon Jae-in has perhaps recognised that the benefits accruing from these mechanisms cannot be meaningfully leveraged if historical baggage continues to weigh down bilateral ties.

Regardless of the rationale underpinning his decision, the latest overture of rapprochement has come as a blessing in disguise for the new Biden administration in America. If guided by patient diplomacy, the Western power can galvanise trilateral cooperation with its East-Asian allies, in order to neutralise the effects of North Korea's nuclear arsenal and offset China's economic and military might in the region.