The Synergia Conclave 2017 – titled Security 360, was held in Bangalore, India from November 17-19, 2017. The key focus of this conference was to examine and be forewarned and forearmed about how larger security issues and threats will affect businesses and the government in India. The event was inaugurated by HE Margaret Alva. HE M.K. Narayanan, Former NSA to Government of India, Governor of West Bengal and Director of Intelligence Bureau; Shekhar Dutt, Former Governor of Chhattisgarh, Former Deputy NSA & Defense Secretary, Government of India; HE Shyamal Datta, Former Governor of Nagaland and Director of the Intelligence Bureau; Padma Bhushan Paul Raj AVSM, VSM, Professor Emeritus, Stanford University, Recipient of the Marconi Prize (2014) & IEEE Alexander Graham Bell Medal (2011); Gaurav Gupta IAS, Principal Secretary – IT, BT & Tourism, Government of Karnataka; Dr. Subhash Chandra Khuntia IAS, Chief Secretary, Government of Karnataka and Mr. Tobby Simon, President of Synergia Foundation – were present at the inauguration event. 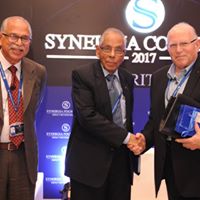 The Conclave was geared towards broadening the security narrative by including both the linear and spatial elements to problem solving. It encouraged all stakeholders to reimagine all aspects of the threat matrix. The conclave provided an opportunity to look at a number of asymmetric threats including those emanating from the digital world.

The conclave brought together security practitioners & policy makers from both the physical and digital world. The summit was extremely successful in bringing together thought leaders to exchange views and formulate new strategies that can effectively reduce the threat index.

There were conversations with top experts, theorists and practitioners who work at the cutting edge of technology. The Synergia Foundation champions itself as a do- tank that is ‘open and evolving’, in addition to it being a forum for discussions that are actionable.