In December 2017, Ali Abdullah Saleh was killed by Houthi rebels near the capital, Sanaa. The Sanaa-based interior ministry, confirmed the news. The modern Republic..

In December 2017, Ali Abdullah Saleh was killed by Houthi rebels near the capital, Sanaa. The Sanaa-based interior ministry, confirmed the news.

A military intervention was launched by Saudi Arabia in 2015, to influence the Civil War in Yemen. A two-year Saudi-led campaign has damaged infrastructure and caused shortage of medicine in one of the most poorest Arab country. Reports have also emerged that there are players within Yemen who actively sponsor terrorism by funding activities conducted by ISIS.

The Saudi-led coalition has been carrying out air strikes against the Houthi rebels for more than 2 years now. Since then the country has been plunged into a civil war in which the exiled government backed by Saudi Arabia is trying to defeat the Houthi group aligned with Iran.

Ali Abdullah Saleh was a Yemeni politician who rose to power following the assassination of President Ahmad al-Ghashmi. He was elected President of North Yemen in 1978. Following the merger of North Yemen with South Yemen on 22 May 1990, President Saleh was sworn in as the new President. In 2011, in wake of the "Arab Spring" that spread across Yemen, Saleh's time in office became more and more untenable, until eventually he was ousted as President of Yemen in 2012. In 2014 he forged an uneasy, unlikely alliance with the Houthis, in order to wrest control of Sana. This forced Hadi to flee to Saudi Arabia. 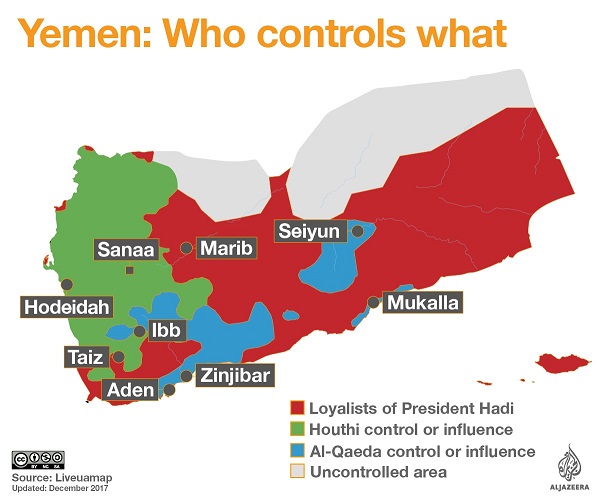 In December 2017, Ali Abdullah Saleh was killed by Houthi rebels near the capital, Sanaa. The Sanaa-based interior ministry, confirmed the news.

In a statement read out on a Houthi TV network, the interior ministry stated, “This is after he and his men blockaded the roads and killed civilians in a clear collaboration with the enemy countries of the coalition.” The ministry also said its forces had "taken over all the positions and strongholds of the treacherous militia in the capital, Sanaa, and the surrounding areas, as well as other provinces in order to impose security".

Saleh’s uneasy alliance with the Houthis only lasted for a few years. It changed recently, when Salesh sought a dialogue with Saudis and their allies. This signaled that he was willing to swap sides and leave his alliance with the Houthis. There were reports that Saudi bombing of Sana’a in recent days was targeting Houthi areas in a move to help Saleh - but that did little to prevent the rebels killing him.

There’s a possibility that [Saleh’s] apparatus will be radically weakened, if not marginalised in the coming period; this leaves the Houthis as the key power in northern Yemen,” said Adam Baron, visiting fellow at European Council on Foreign Relations.

Baron added, “For Houthis, the definition of winning is just survival, and they’re doing a pretty good job at that; for the Saudis the definition of winning is restoring the internationally recognised government. Houthis spent a decade fighting an insurgency isolated in the mountains of northern Yemen. Just being able to hold on to Sana’a, let alone to vanquish Saleh, their historical enemy, that’s a big deal.”

According to reports, roads have been blocked and tanks are on the streets to ensure that situation doesn’t become overtly violent.

The UN Humanitarian Coordinator in Yemen, Jamie McGoldrick, called for a humanitarian pause on 5 December to allow civilians to leave their homes and seek assistance, and for aid workers to continue life-saving programmes. "They don't know what's coming next... Children and young people - it's terribly sad," he told the BBC. "And for us we're in the situation we can't help them because we're equally locked down and we have not got the ability to address their needs the way we should."

Our assessment is that Yemen is now in an unprecedented crisis politically and otherwise. The killing of Saleh now indicates that a peace process will be harder to initiate in the current climate. It is possible that Saleh’s allies (including those in Saudi Arabia) would take revenge and plunge the region in further chaos and violence.