The saga of Bitcoins

In the span of just over 30 days, the value of Bitcoins has dropped by 65%. The most popular cryptocurrency, which at one point traded above $20,000 has now fallen..

As governments across the world have begun countering cryptocurrency exchanges, the markets have become far more volatile. Is this the end of the road for the cryptocurrency?

However, experts had begun expressing doubt on whether Bitcoins were just part of a bubble that will ultimately crash. James Dimon, the Chairman, President and Chief Executive Officer of JPMorgan Chase, has been critical noting, “It's just not a real thing, eventually it will be closed. I'm not saying 'go short bitcoin and sell $100,000 of bitcoin before it goes down. This is not advice of what to do. My daughter bought bitcoin, it went up and now she thinks she's a genius. It's worse than tulip bulbs. It won't end well. Someone is going to get killed. Currencies have legal support. It will blow up.”

Recently, Billionaire investor Warren Buffett also spoke against the cryptocurrency trend. "In terms of cryptocurrencies, generally, I can say with almost certainty that they will come to a bad ending," the chairman and CEO of Berkshire Hathaway said. 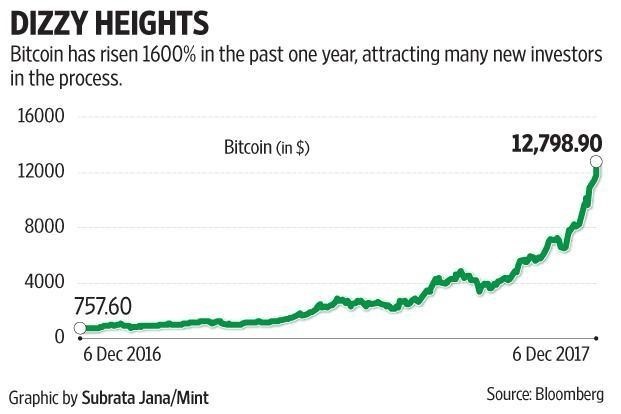 After reaching record high in January 2018, the value of Bitcoins began to drop dramatically. This was also due to the fact South Korean government announced that it will be banning cryptocurrency exchanges – South Korea is one of the biggest markets for trading. The government made the announcement after two cryptocurrency exchanges fell victim to a large-scale breach and lost millions. China too have doubled down on its efforts to crack down and completely eradicate Initial Coin Offering (ICO) and cryptocurrency trading in the country.

In the span of just over 30 days, the value of Bitcoins dropped by 65% and fell below $6,000. Over $60 billion has been wiped off as a result of it. It wasn’t an isolated case with Bitcoins either as other major virtual currencies, including Ethereum and Ripple, fell sharply within 24 hours. India too has taken an aggressive stance against cryptocurrencies. India's Finance Minister Arun Jaitley said last week that the country wants to "eliminate" the use of digital currencies. In addition, the Reserve Bank of India issued more than one warning against trading in Bitcoins.

Banks too have become distancing themselves from the trend. Lloyds Banking Group has banned credit card customers from buying Bitcoins. It is concerned that those buying Cryptocurrencies with their credit cards will ultimately incur debt when the value drops.  “Across Lloyds Bank, Bank of Scotland, Halifax and MBNA, we do not accept credit card transactions involving the purchase of cryptocurrencies,” said a spokeswoman for the Lloyds Banking Group in a statement issued to The Guardian. Germany’s Bundesbank has also called for global regulation of bitcoin and France’s finance minister wants tougher rules for cryptocurrencies.