Russia will ask UN to lift some North Korea sanctions

Moscow will propose to the UN Security Council to reward North Korea with a gradual relaxing of sanctions if it takes the necessary steps towards denuclearization. South Korea is also in favour of reducing diplomatic pressure on Pyongyang for future talks. The history of North Korea began in 1945..

Moscow will propose to the UN Security Council to reward North Korea with a gradual relaxing of sanctions if it takes the necessary steps towards denuclearization.

South Korea is also in favour of reducing diplomatic pressure on Pyongyang for future talks.

8th parallel. In 1950, North Korea, economically and politically supported by China and Soviet Russia, invaded South Korea. United Nations and US forces intervened on behalf of the South and the invading army was driven out during the Korean War.

USSR remained an important stakeholder in North Korean affairs even after the 1950s. The two regions have shared a 17-kilometre long border since 1860. Besides the political link between the two communist states, Pyongyang relied heavily on Soviet food and fuel supplies. However, Ties between Moscow and Pyongyang have somewhat cooled since the 1990s.

Russia has officially complied with UN sanctions against Pyongyang after it conducted its first nuclear test in 2006. North Korea’s nuclear program has been a subject of increasing concern for the international community. In 2017, Pyongyang adopted an aggressive rhetoric, conducted over 20 missile test launches, and conducted its sixth nuclear test. 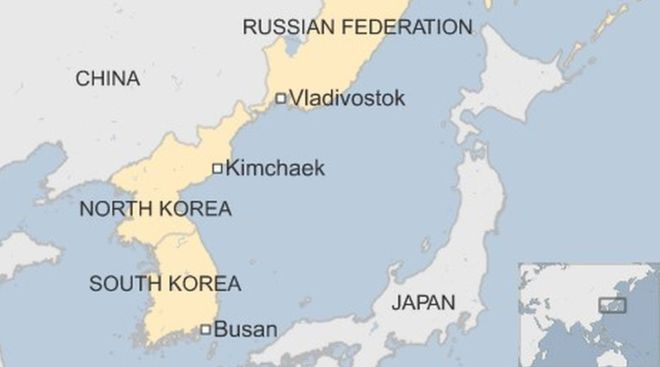 Read more about our extensive analysis on the growing Russian-North Korean relation here.

At the June summit between US President Donald Trump and North Korean leader Kim Jong-un, Pyongyang committed to complete denuclearization in a loosely-worded agreement. Washington has repeatedly stressed that it would keep on applying “maximum pressure” to Pyongyang until it fully dismantled its nuclear weapons program.

North Korea has been subjected to a wide array of international sanctions imposed by the UN. In August, US National Security Adviser John Bolton said that Washington was not going to relieve the sanction burden on North Korea until it sees concrete action.

“The idea that we’re going to relax the sanctions just on North Korea’s say-so, I think, is something that just isn’t under consideration,” Bolton said.

The Eastern Economic Forum (EEF), which is taking place in the Far East city of Vladivostok, has attracted some 7,000 participants from over 60 countries, including a delegation of senior officials from North Korea. On Tuesday, the EEF hosted a meeting between Russian President Vladimir Putin and his Chinese counterpart Xi Jinping.

North Korea now expects the US to implement the obligations undertaken at the summit between Supreme leader Kim Jong-un and US President Donald Trump. The meeting held in June focused on the easing of US sanctions in exchange for Pyongyang halting its nuclear weapons program.

Kim Jong Un is using the “success” of the Singapore Summit to push the US into taking reciprocal steps, which include the gradual lifting of sanctions.

According to her, the military parade dedicated to the 70th anniversary of the founding of North Korea, which took place on Sunday, involved only defence equipment, while there were no ballistic missiles. "The rhetoric has changed, the bellicose rhetoric is gone," she noted, adding that Pyongyang "is sending a signal to the world that North Korea wants to resolve the issue peacefully."

Our assessment is that China and Russia’s interests lie in minimising US influence in East Asia. Both countries would not want to see the influx of American troops or refugees that would come with a regime change. We believe that Russia does not want to be side-lined and lose its hold in the region if US and Pyongyang significantly improve ties. We believe that the role of Russia could remain crucial as it is the only country besides China that provides permanent transport and telecommunication links to Pyongyang.