Russia issues a warning for Georgia against greater Euro-Atlantic Integration.

The Republic of Georgia is a country in the Caucasus region, sharing a border with Russia and Turkey. It has population of 3.7 million people, with a semi presidential republic and a representative democracy. Russia is Georgia’s neighbour to the north and the largest country by land area on the planet, with a population of 144 million. It is a federal semi-presidential republic and the successor state to the erstwhile USSR.

Russia and Georgia have a tumultuous past, more so since the dissolution of the USSR, which gave rise to a new series of secessionist movements, including the present-day disputed territories of Abkhazia and South Ossetia. Russia recognises these secessionist movements as legitimate movements whereas Georgia claims them to be an integral part of the country. The Russo-Georgian War of 2008 resulted in the disputed status of the two territories and both countries actively stake a claim on them. 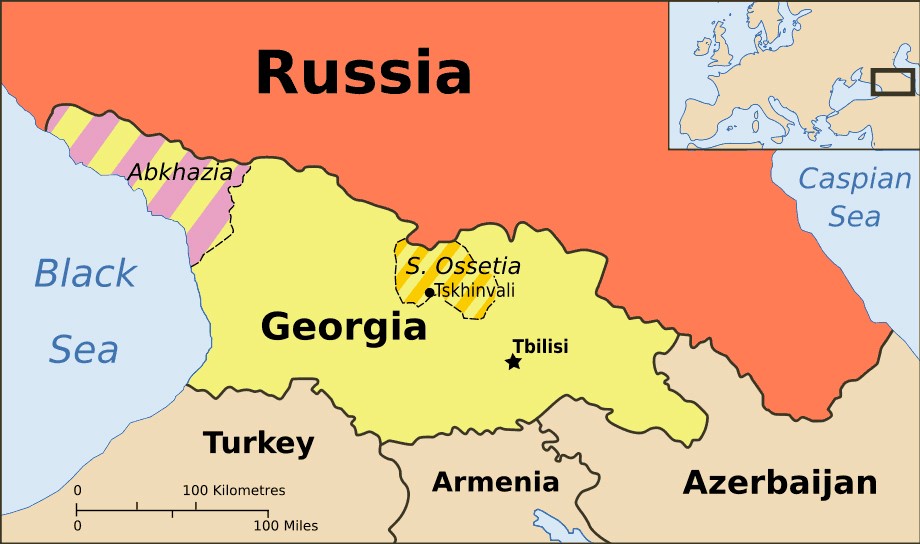 On August 8, 2008 as the world was tuning on their TVs to watch the opening ceremony of the Summer Olympics live from Beijing, Russian ground forces invaded Georgian territory. Under the pretext of protecting civilians living in South Ossetia, Russia overran Georgian troops and secured Abkhazia and South Ossetia within five days and immediately recognised the newly “liberated” regions.  Exactly ten years after the brief but consequential war, Russia is conducting military exercises near the border with Georgia. The Georgian president has called it blatant aggression, but it is widely believed by analysts that Russia is conducting this military exercise as a display of force in response to Georgia’s possible induction into NATO.

Georgia adopted a pro-West foreign policy after the 2003 Rose Revolution and set itself the objective of joining NATO as a full member to counter rising regional threats to its peace and security. Georgia’s membership in NATO would be a major hurdle for Russia’s geo-strategic objectives in the region, especially if Georgia accepts to host NATO troops and other military hardware. Russia’s military exercise comes on the heels of a NATO exercise involving 1,300 Georgian and over 1,200 NATO troops conducted in July 2018.

Russian Prime Minister Dimitri Medvedev classified NATO’s reaffirmation of inducting Georgia into the alliance as a “threat to peace” and stated “There's an unregulated territorial conflict no matter which position you take. And they're going to admit such a country, such a government, into a military bloc? This could provoke a terrible conflict.” Prime Minster Medvedev, who was the President when Russia invaded Georgia in 2008, chose to echo President Putin’s warning issued last month against any new NATO military infrastructure near Russian borders, cautioning NATO to explore the “possible consequences” of accepting Georgia into NATO.

Russia enjoys an overall cordial coexistence with its neighbours, with the prime exception of Ukraine and Georgia. Both countries comprise of strategically important territories for Russian geo-strategic objectives, such as the Crimean Peninsula and Abkhazia, which would give Russia unfettered control over the Black Sea. It is not surprising then, that both territories of interests have been claimed by use of force, directly or indirectly. The greater Euro-Atlantic Integration of Georgia or Ukraine will enable the deployment of NATO and NATO-allied troops within a few hours by road of Moscow’s borders.

We believe the Russian military exercises are a show-of-force manoeuvre, aimed at intimidating Georgia into backing away from NATO membership. We also believe that war is not an option for either country, and they are using the military exercise as an intimidation tactic. Both Georgia and Russia stand to gain if the other backs down from the status quo, therefore the resolution (or the thawing) of this situation will depend on the level both parties choose to engage on.