The Russian government has ambitious plans for the oil resources in the Arctic region and the nation is committed to developing the area. What will the consequences of such..

The Russian government has ambitious plans for the oil resources in the Arctic region and the nation is committed to developing the area.

What will the consequences of such exploration be?

Russian Federation is the successor state to the Soviet Union. Before its dissolution, Soviet Union and the US were the key factions in world politics. Despite being allies during the World War II, by the end of the war, they had become hostile. Brewing mistrust was one of the main reasons for the Cold War. The Cold War, which lasted from 1947 to 1991, found much of the world divided into the Western Bloc (United States and its allies) and the Eastern Bloc (Soviet Union and its allies). The end of Cold War was marked by the dissolution of Soviet Union. Thus, Russia was created in its stead.

Russia has an upper-middle income mixed economy with state ownership in strategic areas of the economy. Market reforms in the 1990s privatized much of Russian industry and agriculture. Some estimates note that Russia contains over 30 percent of the world's natural resources. Russia has an abundance of oil, natural gas and precious metals, which make up a major share of Russia's exports.

Much of Russia’s oil that is extracted is from Western Siberia. However, in 2005, the Russian Ministry of Natural Resources estimated that another 4.7 billion barrels (0.75×109 m3) of oil exist in Eastern Siberia. The Russian oil output was at 10.91 million barrels per day (bpd) in August 2017.

Rosneft is an integrated oil company majority owned by the Government of Russia. Rosneft is headquartered in Moscow's Balchug district near the Kremlin, across the Moskva River.

In 2014, US imposed sanctions on Russia over its alleged actions in the annexation of Crimea. These sanctions prohibit the exports of goods, services (not including financial services), or technology in support of exploration or production for Russian deepwater, Arctic offshore, or shale projects that have the potential to produce oil.

Additionally, oil prices have come down in the past few years, details of which can be found here. 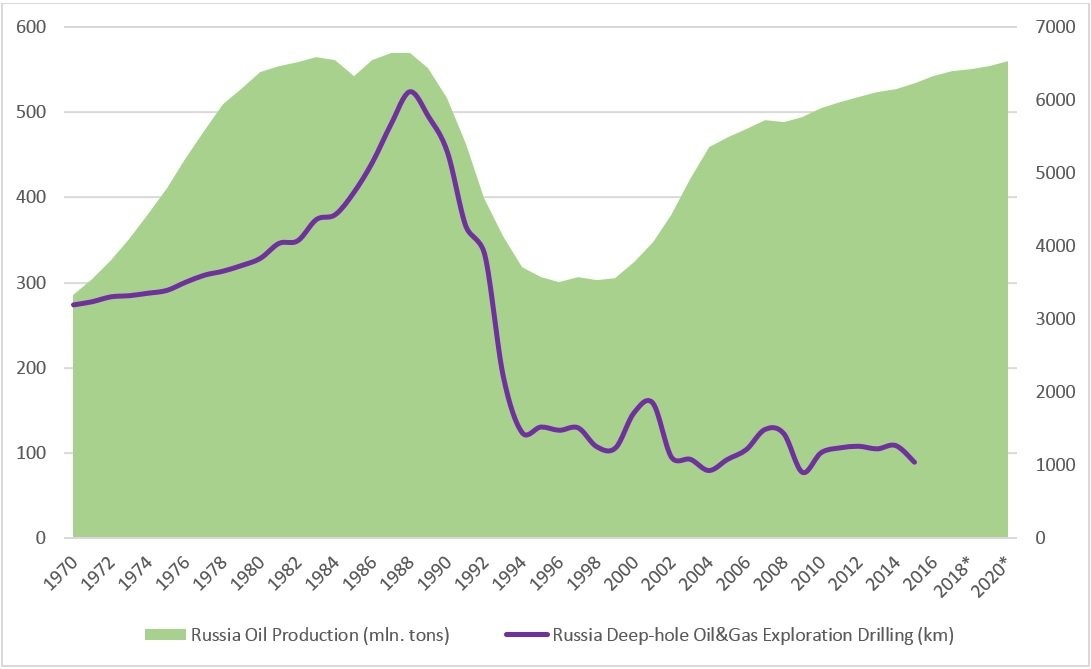 Russia has signaled that it will continue developing oil resources in its sections of the Arctic. The main project that is being spearheaded by Rosneft began in April 2017. It was during this time, when the company began drilling the northernmost well on the Russian Arctic shelf.

At the time, Russian President Vladimir Putin emphasized the importance of Rosneft’s project. He said, “We are seeing the start of work to develop a whole oil and gas province, which preliminary data suggest contains a vast quantity of energy resources. Horizontal drilling is a complex and high-tech operation. This is just the first well. There is much more work ahead. I would like to wish you good luck and I hope for this undertaking’s success.”

Rosneft Head reported to Vladimir Putin has also spoken on the project and has detailed the kind of preparation that went into it. He said, “With your (Putin) support, we gained the right to work on the Khatanga block just over a year ago. We carried out unprecedented geological exploration work within a very short period. We completed 21 linear kilometres of seismic studies that revealed the existence of 114 promising oil and gas-bearing structures. Preliminary estimates suggest that the Laptev Sea’s total potential geological resources could come to 9.5 billion tonnes of oil equivalent.”

In October 2017, the company has revealed that the field boasts recoverable reserves exceeding 80 million tons of oil. This is equivalent to 586.4 million barrels. Rosneft and Gazprom’s oil unit Gazprom Neft are the only two companies allowed to drill in the Arctic offshore under Russia’s legislation. Rosneft also has 28 licenses in the Russian Arctic shelf. From 2017 to 2021, the company is likely to invest $4.354 billion.

In 2017, US imposed another set of sanctions over Russia’s alleged role in the interference of the US Presidential elections. Despite these developments, the Russian government has committed to spending $414.5 million to build equipment that will be used for oil exploration in the Artic region.

Our assessment is that is that Russia is sending a clear signal that no amount of sanctions will deter its ambition for the Arctic region. It also shows that the Russian government is optimistic about the oil prices and believes that the oil glut will be addressed in the near future. By 2050, the Arctic shelf is expected to account for 20-30 percent of Russia’s total oil production.