In 2013, China launched an ambitious transnational connectivity project called the Belt and Road Initiative (BRI). Pitched as a mega instrument to connect Asia, Europe and Africa with large-scale financial aid to over 70 countries, it was dubbed as a modern Marshall Plan to make the most of the gaping infrastructural deficit in the Global East.

One of the most significant arms of BRI is the China Pakistan Economic Corridor (CPEC). Under CPEC, several infrastructural projects in varied sectors including power, communication and transportation have received billions of dollars from China to aid the resurrection of the floundering Pakistani economy.

Initiated with 46 billion USD, CPEC aims to connect the Gwadar port on the Arabian Sea to China’s Xinjiang province. The promised projects include major coal-fired power plants, highways, railways and port development. The latest addition is a hydropower station in Pakistan Occupied Kashmir (PoK) and a Special Economic Zone in Faisalabad, which have seen no further progress. Behind the façade of smooth functioning machinery lie several irritants in the ‘all-weather friendship’ between China and Pakistan. 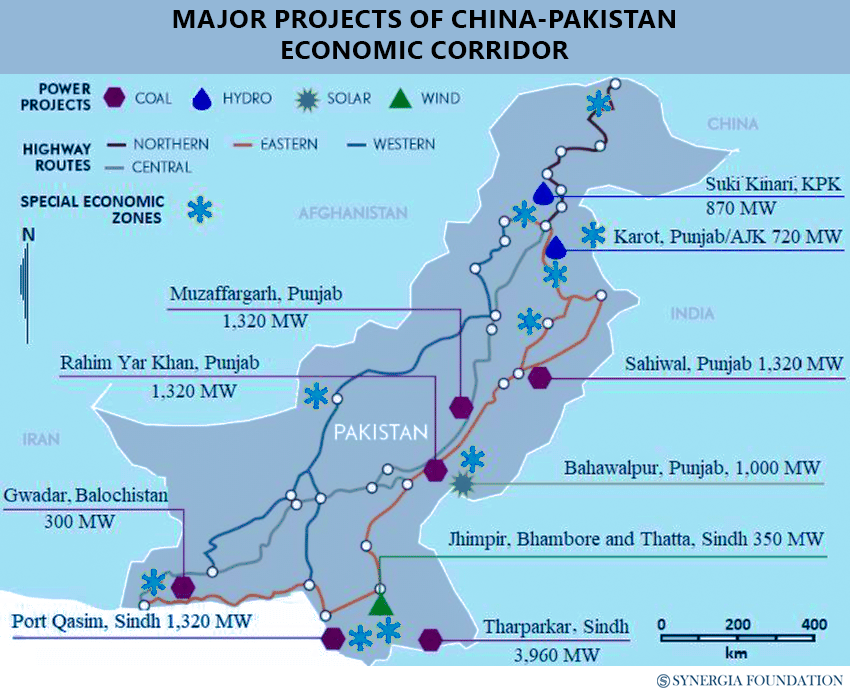 Recent developments in relation to CPEC indicate several stalled projects, corruption scandals, curtailment of funds and a general atmosphere of uncertainty around the previously planned developmental work. Commonly cited reasons for the sorry state of affairs are local political interventions, Baloch terrorism and violence as well as rampant corruption leading to the misuse of funds.

Given that China is the only country currently investing in Pakistan, it is not surprising that the rising security costs are not beneficial for business development. The Islamic nation also lacks the ability to service hefty loans and according to some estimates, the current cost of CPEC investments have crossed 60 billion USD.

Contrary to these claims, the Senate Special Committee on CPEC has stated that China has not funded any infrastructure under CPEC so far. According to it, several projects including Khuzdar-Basima project have been funded by the federal development funds (which are insufficient for completion). The same source mentioned that the Gwadar Smart Port City Master Plan has not commenced yet, despite Gwadar being the central spot for the huge connectivity framework. Corroborating this, the Karachi regional government has shown willingness to borrow funds from the Japan International Cooperation Agency to finance the Karachi Circular Railway, one of the several stalled CPEC projects. With Pakistan’s slumping economic status, Beijing has also shown reluctance to issue a further 6 billion USD cheque for the Mainline-1 railway project under CPEC.

The lack of funds and poor on-ground implementation can be attributed to corruption among officials and investors as well as the lack of accountability of the investing nation due to power disparity between the two. When it was conceived, the BRI was often dubbed as China’s ‘debt trap diplomacy’ and it seems to have lived up to this reputation. According to the International Monetary Fund (IMF), Pakistan owes 27.6% of its total external debt to China, without having availed the promised mega infrastructural boost. Sri Lanka, on the other hand, has seen a few projects under BRI come to fruition like the Colombo International Container Terminal. The loans and imports for the same, however, have worsened the debt-ridden Sri Lankan economy. It owes China a debt that is equivalent to 6% of its GDP and reports indicate it may be re-thinking its pursuit of Chinese investments at this juncture.

Other issues with the supposedly generous Chinese framework are the non-transparent and lopsided contracts, which favour its own interests. The Imran Khan government in 2018 had asked for a review of all CPEC projects because he believed that China had been granted “too favorable terms in many projects” by the Sharif government. Reports from several other countries which are a part of the BRI, like Sri Lanka and Nepal, have also flagged concerns about the terms of contracts being heavily inclined towards the Chinese party.

This, coupled with the extradition of Chinese employees, instead of employing the population of the host country, has led to local discontent – clashes have been reported between Chinese workers and the locals in Bangladesh at Payra Power Plant (China-funded project). Pakistan has also reported several local protests against Chinese-funded projects, especially at Gwadar.

CPEC has emerged as a significant arm of the BRI, considering its geopolitical location- at the head of India and in the Indian Ocean, close to the Gulf - two crucial areas especially important for the economic and military presence of major powers. The pumping of billions of dollars into the Pakistani economy is still hailed by Islamabad as its most crucial shot at development and the revival of its slumping economy. The greatest point of convergence between the two allies is their common animosity with India and the need to assert their territorial superiority in PoK and Ladakh.