Hailed as a positive move for the Indian economy, the Finance Ministry has introduced a bill that nullifies the levy of retrospective capital gains tax. Under the proposed framework, no tax demand can be raised on the indirect transfer of Indian assets if the transaction was undertaken before May 28, 2012. Through this amendment, the government expects to put an end to its long-standing arbitration disputes with global investors like Cairn and Vodafone.

In India, the legal controversy over the levy of ‘retrospective capital gains tax’ can be traced to a financial transaction between Vodafone and Hutchinson Whampoa in 2007. As can be recalled, Vodafone – a U.K-based telecom company, had purchased 67 per cent stake in Hutchinson, which included its mobile telephony business and other assets in India.

Following this, the Indian government had raised a demand of Rs 7,990 crore in capital gains tax. According to it, Vodafone should have deducted the tax at the source before making a payment to Hutchinson, as the transaction had involved assets based in India. However, when this issue came up for adjudication before the Supreme Court, the judges ruled in favour of Vodafone. In their view, the tax department had no jurisdiction to impose obligations on the telecom company for a transfer of shares between the two non-residents.

To circumvent this judgement, the Indian Parliament brought in an amendment through the Finance Act of 2012, which conferred power on the Income Tax Department to retrospectively tax such deals. By virtue of this provision, tax demands could be raised on indirect transfers of shares, which derived their value from underlying assets in India.

As a result, several entities that were involved in similar cross-border transactions came under the scanner. Although the amendment had been primarily directed at Vodafone, tax demands were raised in 17 other cases, including an internal restructuring of Cairn Energy’s assets in India. 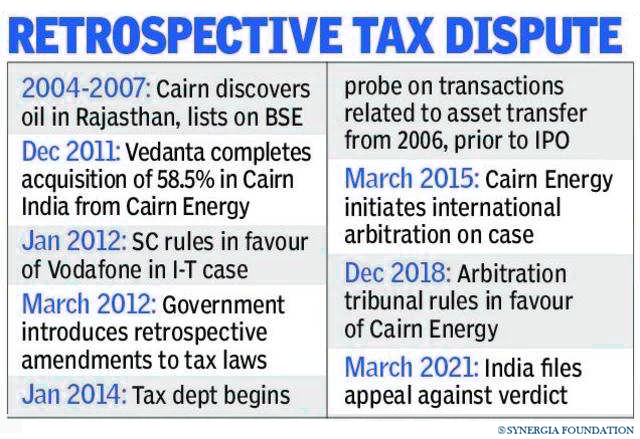 Predictably, the proposal to levy retrospective taxes on capital gains proved to be contentious. Vodafone and Cairn approached the Permanent Court of Arbitration at the Hague, claiming that India’s tax demands had breached trade obligations. India, on the other hand, argued that it had the sovereign right to tax such transactions.

In both these cases, the verdict went in favour of the companies. The Indian government was held liable for violating the guarantee of fair and equitable treatment, as enshrined under the India-Netherlands Bilateral Investment Treaty (BIT) as well as the India-UK BIT. While there were no major damages or refunds in the Vodafone case, the government was asked to award $1.4 billion in damages to Cairn Energy. Accordingly, the latter company moved courts around the world to seize India’s overseas assets. Most recently, it secured a French court order to take over 20 properties in Paris, owned by the Indian government.

Having suffered a series of setbacks in international courts, the Indian government has now sought to nullify this retrospective tax. To allay the concerns of existing foreign investors, it has promised that no tax demand will be raised on the indirect transfer of Indian assets if the transaction was undertaken before May 28, 2012.

Clearly, there has been some form of strategic recalibration at the highest policy level in India. The proposed bill paves the way for settling billions of dollars in international disputes, affirming tax certainty and a stable regulatory environment for prospective foreign investors. The country can finally move on from its spate of embarrassing losses at the Hague, which had considerably tainted its image as an investment-friendly nation.

Moreover, India’s course-correction on tax laws will reflect positively on impending negotiations relating to free trade agreements with parties like the United Kingdom, Australia, European Union and the Gulf Cooperation Council. This, in turn, will have a positive impact on economic growth and employment as the country attempts to recover from the ravages of the COVID-19 pandemic.

In the wake of the Centre's decision to abolish retrospective taxes, media reports indicate that the pace of India's strategic disinvestment plans has picked up. There appears to be growing investor interest in the public sector undertakings that have been put up for sale.

The abolition of retrospective taxes is contingent on the fulfilment of certain conditions, such as the withdrawal of pending litigation. The concerned parties will also have to furnish assurance that no further claim for costs, damages and interests will be filed. Given that companies like Cairn have already secured favourable awards, comprising interest and damages, it remains to be seen whether they will consider this offer.

Secondly, there are other unresolved issues like the arbitrability of tax matters under BITs that will haunt businesses. Although India’s model BIT (introduced in 2016) has sought to exempt tax matters from the framework of investment treaties, certain countries have pushed back against this move. As pointed out by them, a lack of access to international dispute resolution may leave foreign investors at the mercy of domestic legal systems, which are notorious for their bureaucratic delays.