On 17th June 2021, the United States and the European Union agreed to suspend their trade dispute over government subsidies for Boeing and Airbus. This temporary truce will lift the World Trade Organisation (WTO)-sanctioned tariffs for a period of five years, until an overarching agreement on aircraft subsidies can be reached.

The Boeing-Airbus aviation conflict is the longest-running trade dispute between Washington and Brussels. Since 2004, both sides have accused each other of stifling competition and unfairly subsidizing their respective aircraft-building giants. While the U.S. was charged with providing $23 billion in "trade-distorting" subsidies to Boeing, the European bloc was alleged to have facilitated $22 billion (€19.4 billion) in ‘illegal subsidies’ for Airbus.

On adjudicating these disputes, the WTO ruled both sides to be guilty. It permitted the U.S. to impose up to $7.5 billion in tariffs, while the EU was allowed to levy duties up to $4 billion. 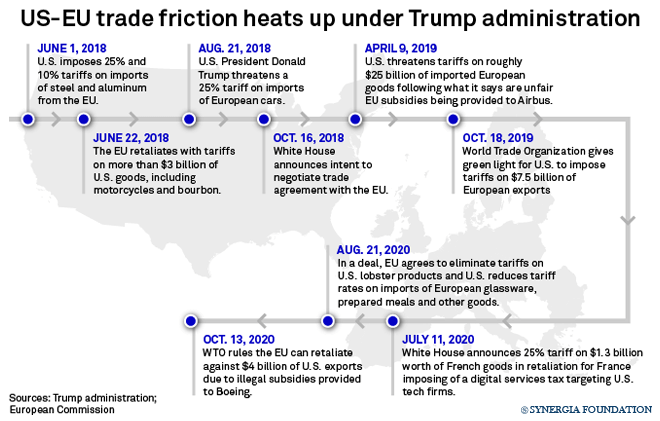 By imposing tit-for-tat duties, the U.S. and EU had dealt a severe blow to many businesses that had nothing to with aircraft production. This included tobacco, spirits, sweet biscuits, chemicals and cheese. Against this backdrop, the recent suspension of mutual tariffs comes as a relief to these industries.

In moving from ‘litigation’ to ‘cooperation’, the two transatlantic allies can now devise a permanent solution for their aviation dispute. They have proposed to set up a working group that will discuss the extent of support given to large civil aircraft producers. They have also agreed to provide financing on market terms and ensure transparency in research and development (R&D) funding.

More crucially, from a geostrategic perspective, the two sides have decided to jointly counter investments in aircraft by "non-market” actors like China.

Predictably, this important breakthrough has been welcomed by both Boeing and Airbus, as it levels the playing field in a highly competitive industry. It also eliminates the largely "lose-lose" proposition of trade tariffs in the aircraft sector.

Having eliminated a major source of bilateral tensions, the expectation is that the U.S and EU can collaborate more widely on trade and technology.

Despite improved transatlantic relations, American tariffs on EU steel and aluminium imports continue to be an irritant in trade ties. Imposed by former President Donald Trump on grounds of national security, these import taxes have greatly infuriated the European bloc. In fact, the latter had threatened to double its existing duties on products like Harley-Davidson motorbikes, U.S. whiskey and motorboats, apart from slapping new retaliatory tariffs.

As a sign of goodwill, however, the European Commission has temporarily suspended this policy for six months. It remains to be seen whether the Biden administration reciprocates by easing its metals tariffs.