Dr. Dennis Hu is the President of the Foundation for Commerce and Cultural Interchange in Taiwan. He is also the Director-General of International Cooperation at the Taipei Computer Association. This article is based on his views at the 104th virtual forum on ‘Semiconductors and Supply Chains in Asia’, jointly organised by the Synergia Foundation and the Taiwan Center for Security Studies.

The unexpected disruptions brought on by the Covid-19 pandemic have severely impacted semiconductor supply chains, but as the world slowly heads towards the first green shoots of normalcy, the future looks optimistic. As an extension of the surprise cycle that began in 2020, the overall semiconductor market will record another strong year of growth. However, a supply shortage will continue to affect industries like automobiles that rely on old technology nodes throughout 2021.

At present, some of the larger players like Samsung, Intel, and the Taiwan Semiconductor Manufacturing Company(TSMC) have collectively announced the investment of more than 130 billion dollars in new chip foundries. Taiwanese companies, in particular, are interested in the global development of semiconductor industries. For instance, the TSMC plans to spend more than 100 billion dollars over the next few years in order to address capacity demand, with at least one foundry under construction in Arizona. 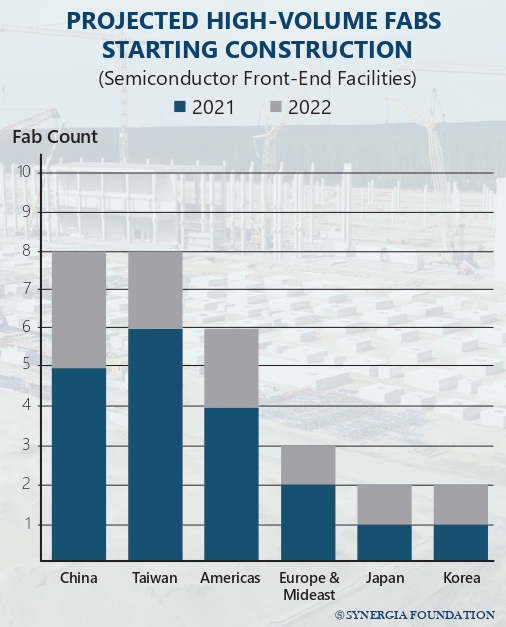 India has the attributes for a very promising market in the future. Its production-linked incentive schemes are particularly lucrative for semiconductor companies. However, the important question to be addressed is how the country can be made attractive for potential investors. Given that the semiconductor industry is very sophisticated, there are certain factors that all chip companies will consider before shifting to new geographies, whether it is the U.S., Europe, or India.

Apart from infrastructural requirements like electricity, water supply and land, skilled manpower is essential to the semiconductor industry. Other facilities like logistics or precision machinery, as well as supporting industries like petrochemical gas, are equally vital. Companies will also consider whether there is a competitive price in the targeted market. Finally, huge capex investments are integral to the success of the semiconductor industry.

By improving on these aspects, India can convince semiconductor industries in Taiwan, the U.S., South Korea etc., to diversify their investments in the country. Owing to its large market and strengths in Very Large Scale Integrated (VLSI) design, its ecosystem for chip manufacturing shows potential.

Over the past decade, there has been a considerable collaboration between New Delhi and Taipei, especially in information and communications technology(ICT). In fact, Taiwanese companies like Acer, Wistron, Foxconn and Pegatron have actively invested in India. However, as far as the semiconductor industry is concerned, the two countries will have to work together in resolving some of the barriers that constrain the ecosystem. The Indian government, in particular, will have to address concerns about policy consistency and regulatory transparency in the country.

For now, it is not strictly necessary to commence cooperation in fabs or foundries. There are other elements of the semiconductor supply chain that can serve as a starting point, ranging from the design of integrated circuits to assembly, testing, marking, and packaging (ATMP). The Taiwanese Foundation for Commerce & Culture Interchange (FCCI) will play an active role in facilitating communication between industries in India and Taiwan.