The increasing influence of the Chinese Yuan is raising red flags. What are the impacts on Yuan’s reserve status and its usage in global trade?

China has been making moves towards becoming the next major reserve currency. The International Monetary Fund (IMF) manages the foreign exchange market by setting the currency composition of various reserve currencies in its basket. Meanwhile, governments hold reserves to manage trade competitiveness by purchasing the currencies of their export partners and keeping their own currency lower with respect to large importers such as the United States.

In 2019, the distribution of currencies held by central banks included: 61 per cent U.S. dollar (USD), 20 per cent euro and 3 per cent Chinese yuan renminbi (¥/CNY). Since 2009, some countries have questioned the stability of the greenback USD as a reserve currency due to the rising U.S. deficit and the increasing likelihood of U.S. Treasury response to support U.S. debt through money-printing. Despite accumulating $6.2 trillion in foreign debt with no plan to reduce deficit spending in the near future, the U.S. still holds the confidence of its trade partners to manage its debts eventually.

Rise of the Yuan

The Yuan once had a fixed exchange rate as its rate against the USD was heavily regulated by the People's Bank of China.  The Yuan was rejected as a reserve currency by the IMF in 2010. However, once the Yuan was devalued in 2015 (which was a market-oriented correction), it received IMF approval for reserve currency in 2016.   This devaluation was considered state-intervention to make the currency more responsive to the market and increase its attractiveness to the IMF's reserves. Many claims that it was also timed to combat the slowing Chinese economy as market factors proved that a rising yuan would not be sustainable for Chinese exports.

The escalation of concerns over China’s currency manipulation, intellectual property violations, and state interventions in the market led to support for President Trump’s trade war with China in 2018. By the end of 2019, the downstream impact of tariffs led to a 22 per cent decline in Chinese exports to the U.S for items subject to a minimum of 25 percent tariffs. The coronavirus also contributed to the downturn as it disrupted global supply chains that unilaterally depended on Chinese exports.  The slowdown forced China to devalue its currency below $7 to maintain its export competitiveness and eventually, agree to a long term process of trade reform to address American trade disparities. The ripple effect onto secondary markets like the U.S. and EU is expected to hit by mid-2020. The Federal Reserve of the U.S. has already responded by cutting interest rates by 50 basis points to reduce the impact of the coronavirus on their longest economic expansion period. The rate cut caused the USD to fall to 106.85 yen in Asia and allowed the Yuan to bounce back to 6.94 per dollar in the onshore market. 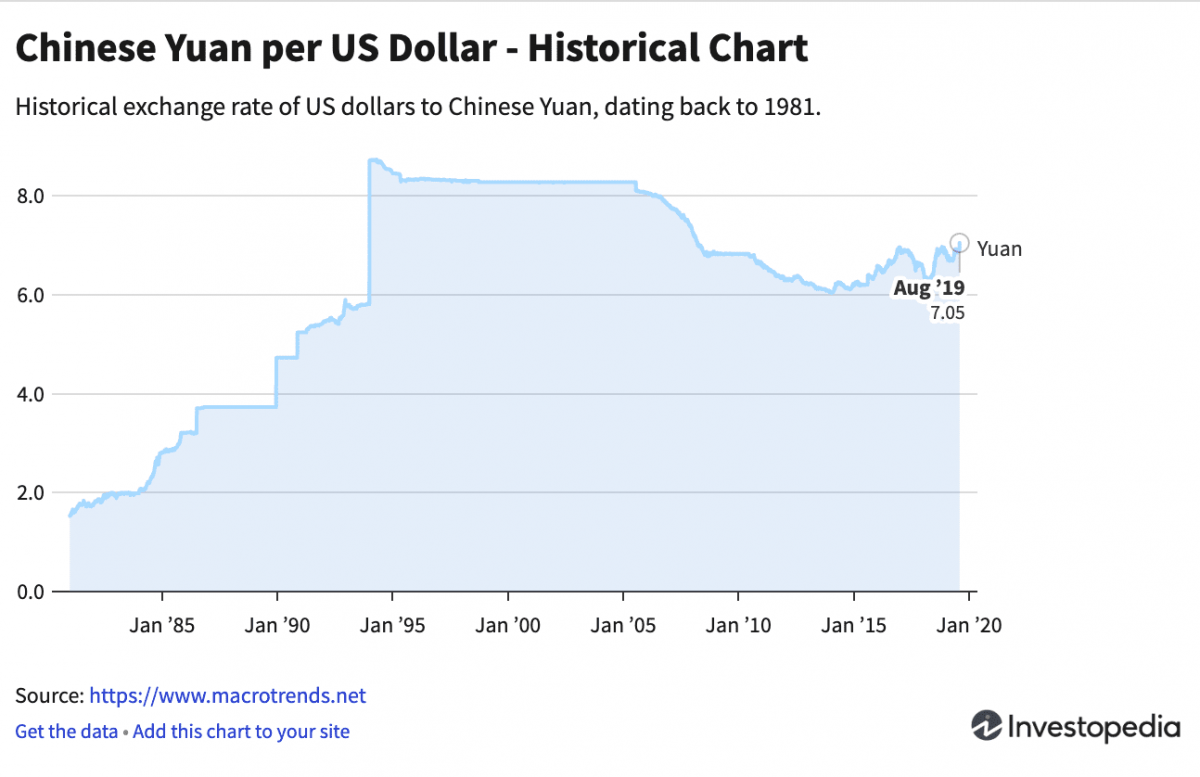 As the "World's Factory", China is able to leverage the usage of the Yuan in its bilateral trade.  The ongoing currency and tariff war between China and the U.S. resulted in Chinese corporations taking the initiative to seek stability through yuan-denominated trade. Between HBIS Group's ¥200 million iron-ore deal with Vale, and Baosteel’s combined ¥240 million import deals in Africa and Europe, exporters in China are securing their leverage in an uncertain market.  This move pushes the importers of Chinese goods to increase their yuan reserves, thus increasing the currency's strength as a reserve currency.

The Indian rupee generally follows the USD-CNY trend as seen when China devalued the Yuan in 2015, and the demand for dollars soared. When investors chose the safety of the greenback, this caused the Indian rupee to plunge to a two-year low of 66.84 against the dollar. Weakening the rupee must be viewed with caution as it also raises the cost of an importer which, in turn, reduces India's purchasing power since it has a negative trade balance. As the rupee drops below 73 per dollar in 2020, Indian exporters can use the opportunity to compete against a weakened China in common industries such as textiles, chemicals and metals. However, India's main imports like oil, consumer technology products and cars will see a price increase.

Due to India’s limited financial resources to provide stimulus, investors’ sentiment has shifted towards Indian bonds and equities, which could further drop the value of the rupee. Following the U.S. Federal Reserve cuts, the Reserve Bank of India is also looking into cutting policy rates and stimulating the economy to withstand the impact of coronavirus.