Amnesty, Power-sharing deals are the demands from armed groups fighting the government in the Central African Republic.

The Central African Republic, which got independence from France in 1960, has always been plagued by violence. The francophone country with 4.6 million people has been ravaged by conflict since its independence, having been governed by warlords, autocratic rulers and even a would-be monarchy.

Despite its significant mineral deposits and other resources, such as uranium reserves, crude oil, gold, diamonds, cobalt, lumber, and hydropower, as well as significant quantities of arable land, the Central African Republic is among the ten poorest countries in the world, with the lowest GDP per capita at purchasing power parity in the world as of 2017.

On 19th June 2017, the government of Central African Republic (CAR) signed a peace agreement in Rome with 13 of the 14 armed groups to end the ongoing violent conflict. However, violence has persisted. The current President Faustin-Archange Touadera has been unsuccessful taking control of the whole region.

Séléka is an alliance of rebel militia groups that subjugated the Central African Republic (CAR) on March 24, 2013. After its official dissolution in September 2013, the remaining rebel groups became known as Ex-Seleka. Séléka leader Michel Djotodia became the nation's president from March 2013 until his resignation in January 2014. 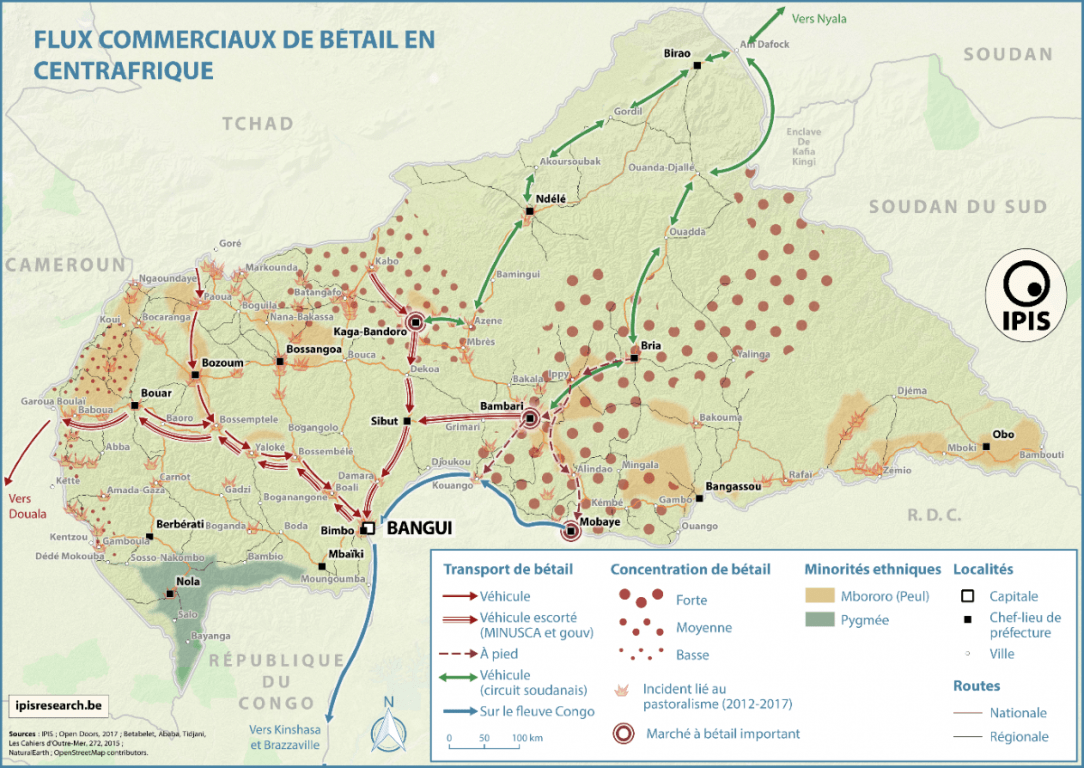 Read more about the recent military agreement between the Central African Republic and Russia here.

Armed groups in the Central African Republic who have been meeting with a team of African Union experts say they’re willing to work with the government on a peace deal, but that comes with a list of demands that include a power-sharing agreement and amnesty for rebel fighters.

That’s according to the Network of Journalists for Human Rights in C.A.R. (RJDH), a media NGO based in Bangui that has seen the documents with some 90 priorities listed by armed-group leaders. Some of the rebel demands run counter to principles established in the 2015 Bangui Forum, the RJDH said.

On the list are 12 non-negotiable items, including the power-sharing and amnesty provisions. The rebel groups say they’ll participate in a national dialogue process, but they want it held in a neutral country and expect it to lead to state and constitutional reforms.

The armed groups also want “revision or cancellation of military cooperation agreements with Russia and South Africa,” the RJDH said.

That demand comes as C.A.R. deepens its defence and security deals with Russia amid increased international scrutiny.

The African Initiative for Peace and Reconciliation, led by the AU, held its first round of consultations with 14 rebel groups in February in seeking to end the violence among groups that emerged from the Seleka and anti-balaka forces.

The attacks on C.A.R. villages continue with frequent reports of mass fatalities, looted and burned villages, and some 608,000 people internally displaced as of June. It’s also among the world’s most dangerous locations for peacekeepers and humanitarian aid workers. There are 205 incidents of attacks on aid workers reported so far this year, with the most recent fatality reported in Alindao on August 1st.

It is interesting to note that this demand and the potential invitation to talks comes less than a day after Russia inked a military cooperation agreement with CAR. As of August 2018, five Russian military and civilian instructors are present in CAR, apart from a mercenary group which is being tracked by Russian journalists.

Russia’s increased presence indicates a deeper cooperation between the CAR and Russia is on the cards. It is, therefore, logical not to rule out CAR using Russian assistance in their fight against the rebel groups.

Our assessment is that CAR will seriously consider the demands if it is able to re-establish peace and order in the country. The armed rebels have been fighting the government since the Civil war. This has hampered economic growth and development. We feel that Russia’s growing presence may have turned the opinions of the “Séléka”, or the loose coalition of rebel groups, into considering peace talks.  We also feel that this is a unique opportunity for the CAR government to negotiate a sustainable ceasefire and possibly ensure cessation of hostilities if it can meet reasonable demands.