For the third time, the Reserve Bank of India sounded a warning against Bitcoins. It is the central bank’s second warning in 2017 alone. Cryptocurrency is a digital asset..

For the third time, the Reserve Bank of India sounded a warning against Bitcoins. It is the central bank’s second warning in 2017 alone.

Cryptocurrency is a digital asset (in other words a form of digital money) that is designed to stay secure. It uses cryptography to secure its exchanges making it nearly impossible to counterfeit. Cryptocurrency in particular is classified as a subset of digital currencies. Bitcoin was the first decentralized cryptocurrency.

Bitcoin has now officially broken above the $12,000 mark. The cryptocurrency reached this landmark record on December 6th 2017.

The Reserve Bank of India (RBI) is India's central banking institution, which controls the monetary policy of the Indian rupee. It commenced its operations in 1935. It plays a vital role in the Development Strategy of the Government of India and is a member bank of the Asian Clearing Union. 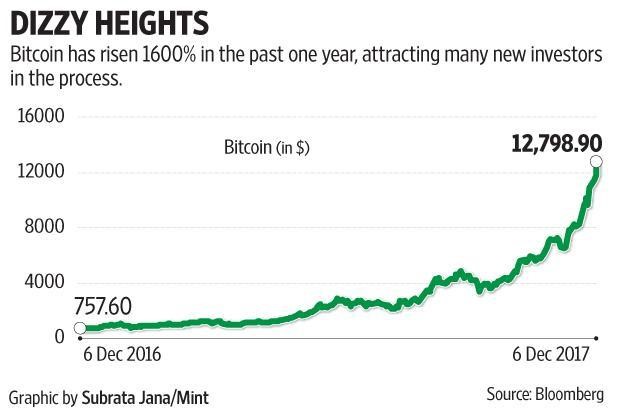 Bitcoin’s price has risen stratospherically. It shot past $16,000 on Thursday after climbing some 67 percent over one week. The value has been climbing per hour. This has increased the debates around the cryptocurrency. Some believe that it is currently in a bubble and will burst.

For the third time, the Reserve Bank of India sounded a warning against Bitcoins. The first time it signaled a warning was in 2014 when it cautioned “users, holders and traders of Virtual Currencies (VCs) including Bitcoins regarding the potential economic, financial, operational, legal, customer protection and security related risks associated in dealing with such VCs.” The second warning was issued on February 2017. It has now stated, “In the wake of significant spurt in the valuation of many VCs and rapid growth in Initial Coin Offerings (ICOs), RBI reiterates the concerns conveyed in the earlier press releases.”

The market in India for Bitcoins has grown according to players in the industry. "Last year this time we had 100,000 registered customers. Now we have gone up to 850,000. The price is surging and from my analysis the people who are investing in Bitcoins are investors who have big pockets and are willing to take risks on their portfolio," Satvik Vishwanathan, co-founder of Uno coin, told the BBC. In addition, Indian e-commerce platforms such as FlipKart and Amazon have now begun recognizing transactions made with Bitcoins.

"There is no architecture to hold the Bitcoins safely, so right now people are taking a physical print out and keeping that in a locker. What the government can do is start a global wallet registry so that we know who is transacting and where the transactions are being done. If my Bitcoin is stolen then with this global wallet at least you can track it," Vishal Gupta, co-founder of Diro Labs, told the BBC.

Nitin Sharma, an angel and crypto investor, said, “There are a few different reasons why the average investor should not overexpose himself to cryptocurrencies. One, compared to even other high-risk asset classes, they are esoteric, and one needs time to develop an appreciation for the underlying technology and the fundamental need for such tokens or currencies. As the saying goes, one shouldn’t invest in something you don’t understand, at least at a basic level.”

The rise of Bitcoin wasn’t even deterred by a multimillion dollar theft that occurred on December 2017. Hackers carried out a heist on a leading digital currency platform called NiceHash and reportedly stole Bitcoins worth than $70 million. "Yesterday morning at about 1 a.m. a hacker or a group of hackers was able to infiltrate our systems through a compromised company computer," NiceHash CEO Marko Kobal said in a video statement Thursday.

Our assessment is that the meteoric rise of Bitcoin has stirred concern with India’s central bank. Other nations have also cautioned investors and traders of the risks inherent in the cryptocurrency. If Bitcoin is in a bubble and it ends up bursting, then that would have a dire affect on the world’s financial systems. However, we do believe that cryptocurrency will be accepted as hard money across all sectors soon. It is also possible that large tracts of unaccounted money, especially from countries like India is being routed into Bitcoins.