Russian President Vladimir Putin recently inaugurated a bridge across the Kerch Strait that will connect Russia to Crimea. Russia annexed Crimea from Ukraine in 2014..

Russian President Vladimir Putin recently inaugurated a bridge across the Kerch Strait that will connect Russia to Crimea. Russia annexed Crimea from Ukraine in 2014 in a move that was condemned by Western democracies.

The 19-kilometre long, 3.69 billion dollar bridge is the longest in Europe.

Crimea is considered to be a part of Ukraine by the international community. Crimea is a peninsula stretching out from the south of Ukraine between the Black Sea and the Sea of Azov. Crimea was annexed by the Russian Empire in 1783 and remained part of Russia until 1954, after which it was transferred to Ukraine. Ukraine ceded from the Soviet Union in 1991 with the dissolution of the USSR. The 1996 Ukrainian constitution stated that Crimea had the status of an autonomous republic. Crimea has its own parliament and government with limited powers. Ethnic Russians make up a majority of the population.

In 2004, there were two months of widespread protests in Ukraine. Known as the “Orange Revolution”, these protests helped bring into power the pro-Western Viktor Yushchenko. Yushchenko replaced the pro-Russian President Viktor Yanukovych in a repeat run-off election, after reports that Yanukovych’s rise to power had been accompanied by vote-rigging.

However, Yanukovych was re-elected in 2010 in a fair election. In 2013, Yanukovych abandoned an agreement with the EU, in favour of deepening ties with Russia, triggering protests. The protests, which began in November 2013, escalated into violence in January the next year. Widespread state violence resulted in international condemnation, and Yanukovych departed the country. Shortly after, Russian President Vladimir Putin claimed that Russian intervention in the region was necessary to protect ethnic Russians.

Kremlin-backed forces seized control of the Crimean Peninsula, and the territory voted to join Russia in a referendum that Ukraine and the West deemed illegal. Crimea was formally annexed into the Russian Federation on 18th March 2014. The annexation of Crimea was a major breaking point in ties between Russia and the west, which condemned Putin’s actions and imposed sanctions on Russia.

Since 2014, Moscow has maintained that Crimea is historically, rightly a part of Russia. Ukraine has stated that the takeover of Crimea "brazenly defied the UN Charter, seizing a part of Ukraine's sovereign territory by military force". It is widely believed that Russia extends support to separatists in south-eastern Ukraine. 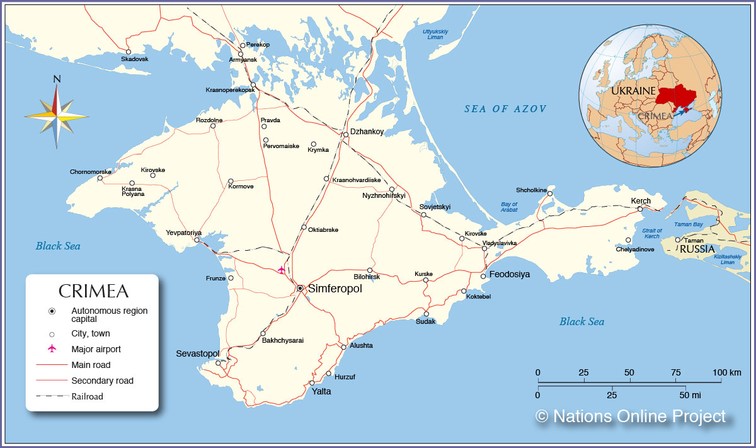 On May 15th, Russian President Vladimir Putin inaugurated a bridge between the southern Krasnodar region and the Crimean city of Kerch. It is Moscow’s only direct road link to Crimea and will allow road transport to a region that had previously relied on air or sea transport.

“In different historical epochs, even under the tsar priests, people dreamed of building this bridge,” Putin said at the opening ceremony. “Then they returned to this [idea] in the 1930s, the 40s, the 50s. And finally, thanks to your work and your talent, the miracle has happened.” A bridge between the two regions was proposed under the last Tsar Nicholas II prior to World War I, then later in the 1930s under Joseph Stalin, and also by the Nazis. However, this is the first time it has been completed.

Construction work was led by the firm Stroygazmontazh, whose owner Arkady Rotenberg has close ties to Putin. In 2016, the US had imposed sanctions on all Russian companies participating in the project, including Stroygazmontazh. The US Treasury Department has said that Rotenberg has been the beneficiary of a number of state projects due to his connections to the president.

The US, EU, and Ukraine have spoken against the bridge. Some believe that the bridge is a symbol of Russia’s increasing isolation from the West. Ukrainian President Petro Poroshenko said that the bridge was “yet another piece of evidence of the Kremlin ignoring international law” and “an attempt to legitimize the temporary occupation of the Crimean Peninsula.” Ukraine has also stated that the bridge prevents access of its larger ships to its ports in the Azov Sea. This statement was seconded by the US and the EU.

Putin’s supporters have said that the bridge is symbolic of Putin’s push against Western hegemony. Russian media outlet RT said that the bridge was Russia’s response to Ukraine and to the West’s harsh measures on Crimea and would help provide supplies to the region. It noted, “In 2014… an armed coup in Kiev put a fiercely anti-Russian government in power in Ukraine. Frightened by threats of nationalist pogroms and a rollback of autonomy, the predominantly Russian population of Crimea voted in a referendum to break up from Ukraine and ask Russia to take the peninsula back as part of the country, which Moscow did. Kiev responded by trying to isolate the region, disrupting supplies of freshwater and electricity and restricting travel to Crimea.”

Our assessment is that the Kerch Strait Bridge is not only a statement that Crimea is a part of the Russian Federation, but also a strategic move. It may help cement Russia’s control over the Black Sea peninsula and integrate the region with mainland Russia. Furthermore, during his election campaign, Putin made promises to improve connectivity and national infrastructure. We believe that this move could be an attempt to demonstrate the Russian president’s commitment to improving public infrastructure. However, should Russian citizens interpret the bridge as a prestige project with little significance, the move could backfire.