Russian President assures Nord stream 2 is purely an economic project and will not impact gas supplies through Ukraine. Nord Stream is an offshore natural gas pipeline from Vyborg in the Russian Federation to Greifswald in Germany that is owned and operated by Nord Stream AG. In 2011...

Russian President assures Nord stream 2 is purely an economic project and will not impact gas supplies through Ukraine.

Nord Stream is an offshore natural gas pipeline from Vyborg in the Russian Federation to Greifswald in Germany that is owned and operated by Nord Stream AG. In 2011, Nordstrom AG issued a feasibility study on expanding the pipeline to form Nord Stream 2, which will increase the annual capacity of the project to 3.9 trillion cubic feet. Often termed as Europe’s largest infrastructure program, Nord Stream 2 is built on Germany’s demand for Russian Natural Gas.

President Putin’s meeting with German Chancellor Angela Merkel this week deals with a wide range of issues, with a focus on the Syrian Refugee Crisis and Crimea. 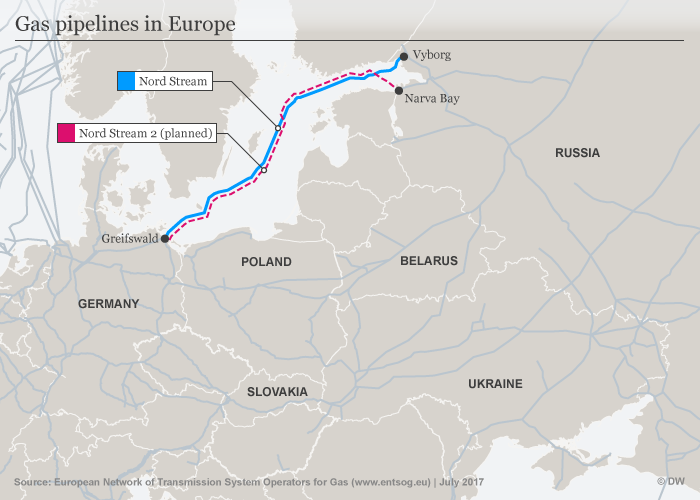 Read more of our extensive analysis of Nord Stream 2: here

The Nord Stream 2 pipeline project has received a permit for construction and operation in German territorial waters and the landfall area around eastern Germany’s Lubmin in early 2018. Nord Stream 2 said it has fulfilled all requirements and expects permits to be issued by other countries, in time for construction to begin as scheduled, in 2018.

Political opposition to the pipeline expansion is spearheaded by the US and Poland, the latter of which stands to lose out on oil revenues with Nord Stream 2. EU officials, including European Council President Donald Tusk, have expressed concern that the completion of the Nord Stream 2 project would lead to Ukraine missing out on €2.5 billion (€10.8 billion) in annual transit fees that Ukraine receives from the current pipeline.

The partnership between Russia and Germany has been slammed by US President Donald Trump, who said in July that Berlin has become unworthy of US military protection, as it is “totally controlled” by Russia, turning into its “captive” after agreeing to the “inappropriate” Nord Stream project.

Last year US Congress gave the President authority to impose sanctions on people and companies related to the pipeline – which are being finalized, according to The Wall Street Journal citing its sources.

Meanwhile, the Russian president also spoke of trade with Germany during the press conference, stating that the country is "one of our leading partners in trade," growing by 22% last year. "From January to June this year, we added another 25%," he said.

The two leaders will also discuss the Iran nuclear deal, with Merkel saying: "We would like to preserve this deal, but we are also concerned about the missile program with Iran."

The biggest threat to the US and its NATO allies is the excessive dependence of Germany, NATO’s fourth largest military force, on Russian natural gas. Analysts have speculated that Russia may use its leverage over Germany as a political tool to counter any accusations in the event of a future Russia-Ukraine natural gas dispute.

The Russian response has been that the pipeline increases Europe's energy security and that the criticism is caused by bitterness about the loss of significant transit revenues. Alarms were raised when President Putin announced Russian Navy’s Black Sea fleet will ensure the ecological safety of the project, implying a near-free access pass to the fleet from Russia to Northern Germany.

Our assessment is that despite constant criticism from its allies, Germany will continue to endorse the Nord Stream project. Germany is expected to import 50% to 75% of its natural gas needs from Russia in the coming decade, and it is not a surprise then that Nord Stream 2 is so valuable to Berlin.