In a State of the Nation address on the 1st of March, Russian President Vladimir Putin addressed the country’s poverty. Approximately 20 million Russian citizens live below..

In a State of the Nation address on the 1st of March, Russian President Vladimir Putin addressed the country’s poverty. Approximately 20 million Russian citizens live below subsistence levels. The president is aiming for re-election in elections that begin on March 18th.

Russian President Vladimir Putin was born in 1952. He was an active member of the KGB for 16 years before retiring as Lieutenant Colonel. Putin joined politics in 1991 and was named acting Prime Minister in 1999. He won the 2000 Presidential elections and has remained in power since, interrupted only by a 4-year term as Prime Minister from 2008-2012.

Putin has been criticized as an autocrat. International observers have noted that the country has seen increased corruption and declining democracy under Putin’s rule. A number of his most vocal critics died under suspicious circumstances, and he has been accused of human rights violations. The President has denied all allegations.

Putin’s first two terms in power saw an average annual growth rate of 7%. He has enjoyed relatively high approval ratings throughout his career, particularly since the country’s annexation of Crimea in 2014. However, intervention in Ukraine resulted in a number of Western sanctions which hurt the country’s economy. The World Bank has estimated that the Russian GDP will have a “modest growth” of 1.7% in 2018, higher than estimates for previous years.

Additionally, the country faces a problem of poverty, with rates higher than other European countries. According to 2016 estimates, over 20 million Russians, 13.5% of the population, live below the national poverty line. This is, however, an improvement from the 2000 estimate of 42 million people. The Russian national poverty line is $171 a month. According to the World Bank, more vulnerable groups, such as pensioners, were hit worst.

In 2017, it was revealed that the bottom 40% of the population own approximately 1.7% of the national wealth, while the richest 10% own 87% of the country’s wealth. According to different reports, 1% of the Russian population holds 46% of personal bank accounts in the country. Life expectancy in Russia is 63 years for men and 75 years for women: lower than several European counterparts. 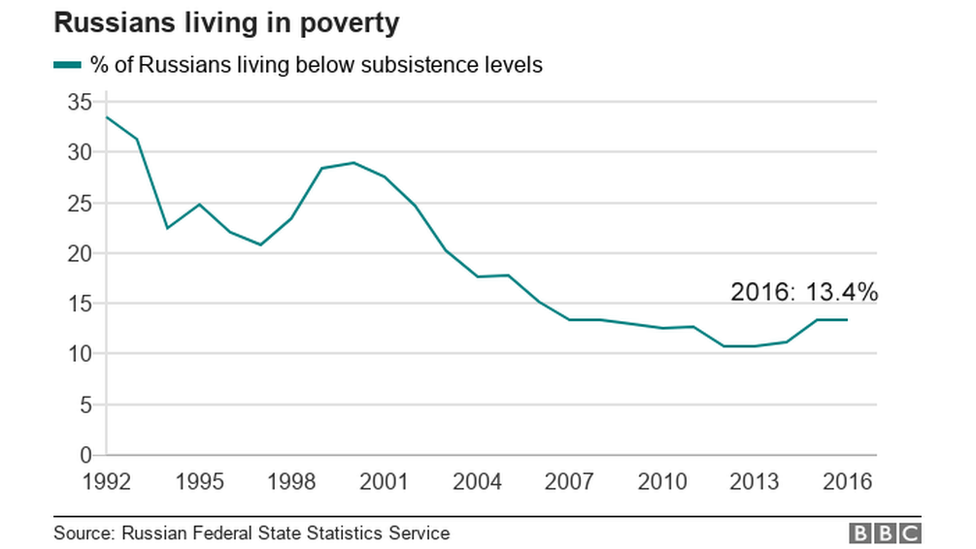 During Vladimir Putin’s annual State of the Nation address, the President announced his intention to improve disadvantaged citizens’ lives in upcoming months. He said that he wanted to halve poverty within six months, and also increase employment and life expectancy to match rates in Japan and France. “Every person matters to us…. We need to improve people’s lives,” he said on Thursday, addressing the houses of parliament. “Our top priority is to preserve the people of Russia and improve their welfare.”

This address, 17 days before polls begin, is the Russian President’s first major statement regarding his policy for his next term. Putin addressed a range of issues, including pensions, child care, urban renewal, and roads. He promised to invest 5% of the country’s GDP in healthcare, and billions in family care and roads. He also emphasised the need for economic reforms, and the creation of more “modern, high paying” jobs.

Putin added that Russia would have to modernize rapidly, and make some “hard decisions”. "We have no right to allow the stability we have achieved to lead to complacency… Falling behind is our main threat, that’s our enemy," he said. "Russia is now a leading country with a powerful foreign economic and defence potential. But from the point of view of the extremely important task of ensuring people's quality of life and welfare we, of course, have not achieved the level we require. But we have to do this and will do this.”

The President is aiming for re-election for a fourth term this month. He is expected to win as approval ratings have remained high. Other candidates in the elections include Pavel Grudinin from the communist party and Vladimir Zhirinovsky from the Liberal Democratic Party of Russia. Alexei Navalny, a significant opposition leader, has been barred. Polls for the first round of elections open on 18th March.

Our assessment is that Putin’s first major policy statement is highly populist, possibly for the benefit of the upcoming elections. It addressed several important issues. However, the policies outlined were not concrete. The President did not detail any structural reforms, nor did he address the income disparity and corruption that grip the nation.  Nevertheless, we believe that the President will be elected for another term.