Sacked Catalan leader, Carles Puigdemont and four of his ministers have been given conditional release after they turned themselves in to Belgian police. A Belgian judge ordered the..

Sacked Catalan leader, Carles Puigdemont and four of his ministers have been given conditional release after they turned themselves in to Belgian police.

A Belgian judge ordered the release after a hearing that lasted over 10 hours. The Spanish authorities have issued an European arrest warrant against these officials on charges of rebellion and sedition.

Catalonia has been settled by the Phoenicians, the Etruscans and the Greeks. In 13th century, the institutions of Catalan self-administration were formed. This was done under the banner of Generalitat de Catalunya. Even though unification process took place under the leadership of the Crown of Aragon in 1476, Argon allowed Catalonia to retain its autonomy. Between 1640 and 1659, there was a revolt within Catalonia for secession. Parts of the region that ceded are now part of France.

In 2014, a non-binding Catalan self-determination referendum was held. Over 80% of the people voted in favor of independence. The momentum for an independent state once again began to build in 2017. A vote for the region’s secession was held on October 1st, 2017. Out of 5.3 million registered voters in the region, more than 2.2 million people voted, according to Catalan officials. Just under 90% voted in favor of secession. Political crisis marred by violence has since erupted in the region. Spain has rejected Catalonia’s declaration of independence. The government has also removed Carles Puigdemont, the Catalan leader. In addition, it was revealed that the Spanish court was considering jailing Puigdemont and other leaders of the secessionist movement.

In November the crisis escalated as eight of the Catalan ministers who had been removed by the main government were remanded in custody by a Spanish high court judge over the region's push for independence. Prosecutors are also seeking a European Arrest Warrant for ousted Catalan leader Carles Puigdemont. Among those who have been jailed is Puigdemont’s deputy, Oriol Junqueras. 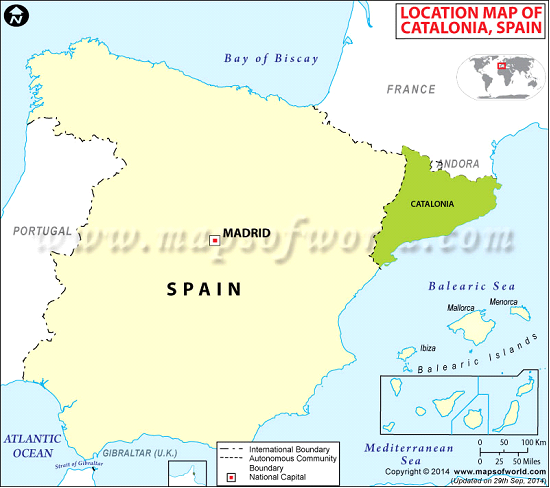 The ex Catalan officials who were remanded are:

On November 5th, 2017, Carles Puigdemont and four of his associates turned themselves in to Belgian police. The Spanish authorities had issued an arrest warrant for rebellion and sedition. A Belgian judge has now granted Puigdemont and his associated conditional release. They will have to appear in court in another 15 days. They are also not allowed to leave Belgian without a consent from a judge.

“The request made by the Brussels’ Prosecutor’s Office for the provisional release of all persons sought has been granted by the investigative judge. The next step in the proceedings is the appearance of the five defendants before the Chambre du Conseil within the next 15 days,” prosecutors said in a statement.

Catalonia’s former regional president Artur Mas said, “Under these exceptional circumstances that our country is going through, don’t we have to substitute the normal and logical competition for the cooperation we all need? If we add the issue of independence, we won’t get as many people to support us.”

Meanwhile, the Spanish government has scheduled elections for the region in December 2017. Projections estimate that pro-secessionist parties in Catalonia will win with around 66-69 seats. Although, they may likely fall short of a majority of seats in parliament needed to revive the secession campaign again.

Our assessment is that the political and constitutional crisis in Spain is far from over. There is lack of clarity over who has authority to govern the region of Catalonia until the elections in December. If Puigdemont is arrested, then he will not be able to contest in the elections. Madrid’s actions have been heavily criticized by many within the region. Even if Catalonia does not secede from Spain, there will be deep fractures between the two regions for years to come.