people and 256 injured. According to the latest reports, more than 40 people are feared to be trapped inside a building that currently tipping perilously. In addition, at least 145 people have been declared missing due to the magnitude 6.4 earthquake.

Taiwan is an Island, which is a highly controversial region in Asia. While Taiwan is considered a province in “Greater China,” it is largely an independent state. It has been independent since 1950 but Beijing considers it a rebel region that needs to be reunited with China.

The region has been affected by large scale earthquakes through its history. One of the worst earthquakes recorded in Taiwan was the one that occurred in 1935. It had a Richter magnitude of 7.1 and Shinchiku Prefecture, Japanese Taiwan was the epicenter. It claimed the lives of 3,276 lives and caused extensive damage. Twelve seconds after the mainshock, an aftershock of ML 6.0 occurred, centered on Gabi Village (present-day Emei Township, Hsinchu County).

In 1999, the region was once again hit by a devastating earthquake. The Jiji earthquake was a 7.3 Ms or 7.6–7.7 Mw earthquake which occurred in Jiji, Nantou County, Taiwan. A total of 2,415 people were killed and 11,305 injured. It also caused extensive damage to the region amounting to over $10 billion Dollars. The disaster, dubbed the "Quake of the Century" by local media, had a profound effect on the economy of the island and the consciousness of the people. The public blamed the government for what they deemed a delayed response in rescue efforts. Over 100,000 people were rendered homeless as a direct consequence of the earthquake.

In 2016, another major earthquake occurred in Taiwan. It had a moment magnitude of 6.4. A residential building collapsed that resulted in the deaths of many people. 117 people died due to the earthquake. Once again, there was major property damage. 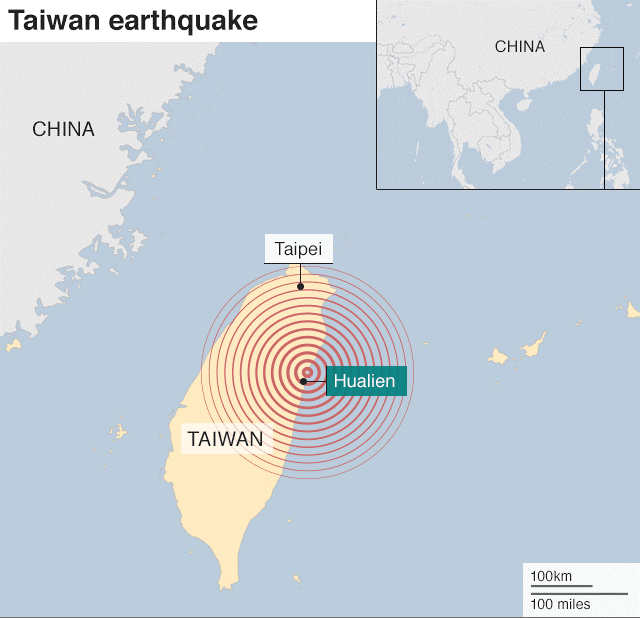 On February 6th 2018, the island of Taiwan was hit by a powerful 6.4-magnitude tremor about 20km off the island's east coast. Hualien, a popular tourist hub, is home to about 350,000 people. At least six people have died and 256 have been injured. Around 145 people have been declared missing. In addition, at least 40 people are currently trapped inside a building that is precariously tipping to the side and on the verge of collapsing. There are many more trapped in other venues including 17 who are in a B&B in the area.

A number of aftershocks have continued to hit the region in the aftermath of the massive earthquake. Presently, 600 military personnel and more than 750 firefighters have been coordinating all on ground rescue efforts. They have used cranes and beams to prop up the residential complex that looks like it is on the verge of collapse. As the region is a popular tourist hub, a number of other nationalities have also been affected by the earthquake. Of the 31 foreigners who were affected, nine were Japanese and 14 were South Koreans. Meanwhile, a number of homes and buildings have been completely destroyed due to the quake. 40,000 homes are without water or other basic facilities.

"It's the biggest quake I've experienced in Hualien in more than 10 years," resident Blue Hsu told AFP, who said his home shook violently. He added, “The lower floors sunk into the ground and I saw panicked tourists being rescued from the hotel. There is one bulldozer and about 50 rescuers on the scene.”

"I saw the first floor sink into the ground. Then it sunk and tilted further and the fourth floor became the first floor," said Lu Chih-son, 35, adding he saw 20 people rescued from the building. "My family were unhurt, but a neighbour was injured in the head and is bleeding. We dare not go back home now. There are many aftershocks and we are worried the house is damaged."

At least 15 aftershocks have been recorded since the earthquake hit the region.

Our assessment is that the Taiwanese citizens have often blamed the government for not reacting swiftly during earthquakes to prevent loss of life. Public’s resentment of the government played a crucial role in the elections that took place after 1999. The region of Taiwan is prone to earthquakes as it sits near a junction of two tectonic plates. According to the government, the island was hit with at least 100 earthquakes (minor) in the past one month alone. The region’s infrastructure should be designed in a manner to prevent maximum damage.