As reports emerged of a possible ‘soft Brexit’, the value of the UK Pound surged to $1.3691 on January 12th 2018. This is the highest it has been since the result of the EU..

As reports emerged of a possible ‘soft Brexit’, the value of the UK Pound surged to $1.3691 on January 12th 2018. This is the highest it has been since the result of the EU referendum in June 2016.

It has been revealed that the governments of Spain and the Netherlands are willing to back a soft Brexit deal.

It was on June 23rd, 2016, when Britain narrowly voted to leave the European Union stunning Europe and the world in general. The EU employs a set of policies for its 28-member states that aims to ensure the free movement of people, goods and trade among other services. Britain is deeply intertwined with the workings of EU especially in regard to trade. Leaders of member nations have expressed their dismay over Britain leaving the body over the past year. German Chancellor Angela Merkel and Dutch Prime Minister Mark Rutte are among those who have been vocal about their apprehension to the unfolding events.

Experts have voiced concerns over the stability of the region’s economy post Brexit. At first the outlook seemed optimistic as UK’s economy grew in a higher than expected rate for the first three months after the vote. However, this trend reversed in 2017. Based on its performance post the vote, the International Monetary Fund had predicted that the UK would grow at 2% in 2017. However, it lowered its forecast in July announcing that growth rate was likely to be 1.7%. Commenting on the growth, IMF said that UK’s performance has been “tepid.”

A soft Brexit, while not officially defined, would keep Britain in either the single market or the customs union or both. It could be achieved along the lines of the Norway model or via an FTA, but would require concessions on free movement, ECJ jurisdiction and budget payments. 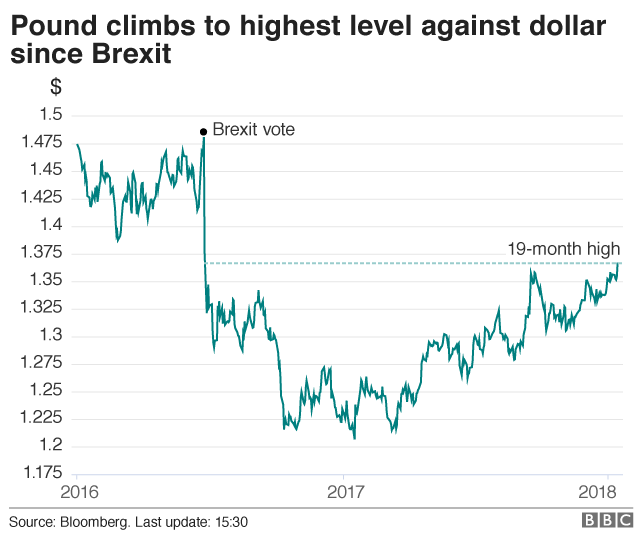 As reports emerged of a possible ‘soft Brexit’, the value of the UK Pound surged to $1.3691 on January 12th 2018. This is the highest it has been since the result of the EU referendum in June 2016.

There have been fears that a ‘hard Brexit’ would leave companies and organizations in the UK at a disadvantage in Europe as they would no longer be allowed to be part of EU’s single market. However, Bloomberg has since reported that Spanish and Dutch finance ministers have agreed to push for a Brexit deal that keeps Britain as close to the European Union as possible. The Bloomberg report notes, “Spanish Economy Minister Luis de Guindos and his Dutch counterpart Wopke Hoekstra met earlier this week and discussed their common interests in Brexit, according to the person. Both have close trade and investment ties and are concerned about the impact of tariffs.”

Another reason why the Sterling surged in value against the Dollar was due to the present weakness of the US Dollar. Neil Wilson at ETX Capital said: "Although the comments came from just two ministers who don't necessarily speak for the Barnier team as such, there is a sense that the direction of travel for the UK with regards Brexit is a lot more positive than it was prior to December. "We also have positive language around financial services and the prospect of Britain paying for market access."

Alvin Tan at Societe Generale also agreed on the assessment noting, "Sterling is benefiting from the dollar weakness and the growing euro strength rather any pound-specific factors, which if anything have been underwhelming this week.”

Brexit continues to be embroiled in confusion and controversy. Earlier this week, Nigel Farage, the UK politician who had campaign hard for Brexit, noted that a second referendum should be held. However, it is unlike for a second vote to take place.

Our assessment is that the possibility of a ‘soft Brexit’ boosted investor confidence and resulted in the surge in the value of the Pound. The breakthrough deal reached between UK and EU in December also likely assuaged investor fears that Britain would be locked out of trade in the future.