In a massive drug bust, police in Jordan shut down a facility that was manufacturing illegal drugs including Captagon.

Captagon is considered to be the most commonly used drug by fighters in Syria. The nation has previously seized millions of Captagon pills. According to Jordanian authorities, the amount of material that was seized could have manufactured more than a hundred million illegal pills.

Captagon was a legal pharmaceutical drug that was earlier used to treat psychiatric disorders such as Attention Deficit Hyperactivity Disorder, narcolepsy and depression. The counterfeited version is further adulterated with amphetamine, methamphetamine and other nonstimulant substances. This makes it far more potent than the original form. While the drug has been banned, it is believed to be produced in large scale numbers in Syria and is reportedly used by multiple armed groups fighting in civil wars.

In fact, the trade of this drug reportedly brings millions of dollars worth of revenue back to Syria and is likely used to finance the weapons and ammunition used by ISIS. According to media sources, those who take this drug end up feeling ferocious and invincible to the point that they don’t even fear death. In the last five years the quantity of Captagon that has been seized has quadrupled from 6.5 million to 17.7 million.

One of the troubling trends that has emerged in the recent times is the spread of this drug to newer regions including Europe. French authorities reported that in 2017 alone, they have seized 300 pounds (750,000 pills) of Captagon. It was the first time this drug had been seized in France and it is likely that it won’t be the last.

In 2016, the World Anti-Doping Agency's recently released report noting that Jordan remains a corridor country — rather than a destination — for drug smuggling. The ministry has stated that much of the drugs that are seized are meant for neighboring nations. Anti-Narcotics Department (AND) Director Brig. Gen. Anwar Tarawneh has spoken about this trend noting, “The majority of the illegal narcotics that are smuggled into the country are destined for neighbouring countries and I can say the situation is under control in Jordan. We need to work on issuing the right message to combat the issue, not spread it.” In 2015, the AND handled 11,062 illicit drug cases, including 10,080 for possession and dealing and 982 for trafficking. 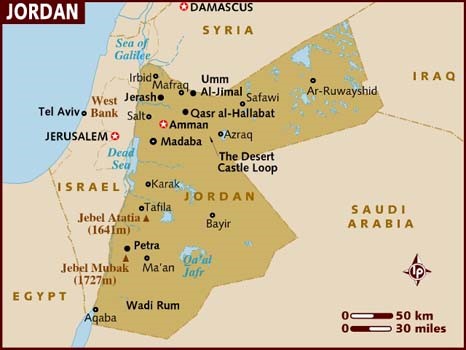 On September 2016, authorities in Jordan revealed that the state had seized a “record” haul of more than 13 million Captagon pills. This is the form of drug that is often used by fighters in neighbouring nation of Syria. At the time, the ministry only revealed that the drugs were meant for another nation but did not clarify whether or not it was Syria.

In January 2018, law enforcement in Jordan raided and shut down a facility that was producing illegal drugs. The facility was located in Amman, which is considered a top industrial region in the country. It was masquerading as a factory for cleaning supplies in an industrial area. According to Jordanian authorities, the amount of material that was seized could have manufactured more than a hundred million illegal pills. Media reports have noted that this was the first of its kind raid that had occurred in Jordan. AND also revealed that eight people have been arrested in the drug bust. Authorities have dubbed the facility a “Captagon laboratory.”

In addition, another team raided an apartment in the capital, which was used as storage for the narcotic pills, and found around 2 million Captagon pills. At this venue, another person was also arrested. So far based on preliminary investigation, authorities believe that  the suspects were importing chemicals used to manufacture detergents and hiring foreign nationals to treat these chemicals in preparation of the pills.

Our assessment is that drug trafficking in Jordan has implications in its neighboring countries. Jordan presently is largely used as a drug corridor and not a destination for illegal drugs. Multiple reports have confirmed that Captagon is the drug of choice for those fighting the civil war in Syria as well as ISIS operatives. Governments worldwide should enforce strict regulatory mechanisms to secure the chain of custody of pharmaceutical medicines. There needs to be strict monitoring of drug distribution and the police has to keep vigil on traffickers of narcotics. There must be proactive intelligence gathering by designated agencies to monitor such movement of drugs before it enters the territorial borders of any country.