Dacca, as his first foreign destination after the pandemic-imposed travel bans had been lifted, to attend the 50 years celebration of the liberation of Bangla Desh last year. Under PM Hasina's rule since 2009, Indo-Bangladesh relations have grown in strength, apart from a few hiccups now and then.

Despite efforts by radical Islamist parties to play down the Indian role in the war of liberation, there is widespread public appreciation and acknowledgement of Indian sacrifices in the birth of their nation, a sentiment which has been nurtured and advanced by the Hasina government. After the purging of pro-Pakistan elements from the Bangladesh armed forces during the last two decades, both militaries too enjoy a very warm relationship.

Bangladesh is a neighbour India can scarcely ignore- it is a land bridge to India's northeastern provinces and has the potential to connect India to South East Asia. More importantly, with its several deep-water ports, Chinese influence in Bangladesh would be detrimental to Indian maritime interests in the Bay of Bengal and beyond.

Indo-Bangladesh relations rest on three pillars-trade & connectivity, regional geopolitics and the future trajectory of the partnership. 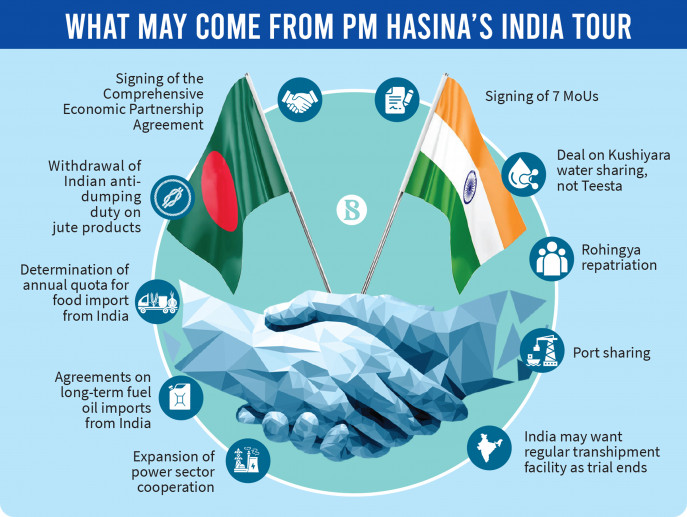 As Bangladesh grows its economy, it offers India a very attractive option for trade. New avenues are being explored in artificial intelligence, fintech, cybersecurity and start-ups. The decision to start negotiations on a Comprehensive Economic Partnership Agreement (CEPA) during the current visit is a good indicator of future prospects.

Trade remains the lynchpin of the partnership as both nations strive to improve the lot of their teeming millions. With anti-dumping duties and multi-modal connectivity under the spotlight, the clear objective is to make the trade multi-sectoral with a focus on new and evolving areas of cooperation while enhancing traditional segments. Of course, the key to this is the connectivity which remains, at best, mediocre due to a lack of investments and, some would say, a trust deficit. As a special concession, India has offered free transit to Bangladesh exports to a third country, including the usage of its ports on the eastern coast. Of course, what has not been mentioned but is implied is that India would expect similar reciprocity for its 'look east policy'.

Both nations are seeking investments to increase the trade volumes in different areas like supply chains, defence equipment, vaccine research and production and the pharma industry in which India has a lead. Of course, both governments realise that due to the porous border, a great deal of taxation is lost due to the informal nature of trade; this must be stopped through better border management.

The Chinese factor is a challenge that India must face in its immediate neighbourhood and learn to deal with through a combination of soft and hard approaches. China and Bangladesh have steadily come closer since 1976, with China being the largest source of its imports. Chinese have made generous investments (which India will be hard to replicate) in the manufacturing and energy sectors, especially the green sector. Like in other South Asian countries, the Chinese eye the excellent deep-water ports for its commercial and naval activities. They have invested nearly $15 billion in various infra projects, including the Payra Deep Sea port. The military partnership is also significant, with the bulk of the equipment held in the Bangladesh army of Chinese origin. This has been facilitated under the 2002 Defence Cooperation Agreement.

The quantum of Chinese investments raises fears within Bangladesh of a 'debt trap' akin to what Sri Lanka is facing. But official circles in Bangladesh call such fears unfounded because, unlike Sri Lanka, Bangladesh owes most of its external debt to multilateral financial institutions and not to China. In fact, China takes up just 6 per cent of the total external debt of Bangladesh. In most projects in Bangladesh that it has been involved, China is not the majority shareholder, and it has followed a partnership-based model.

Aware of Indian sensitivities on the issue of Chinese footprint in her country, the Bangla Desh prime minister is on record saying, “Our foreign policy is very clear, friendship to all, malice to none. If there’s a problem, it’s between China and India. I don’t want to put my nose there”.

It is in India's interest that Ms Sheikh Hasina retains power in the next elections scheduled in late 2023, as the opposition Bangladesh National Party (BNP) has historically been anti-India in its stance and policies. The return of BNP would concern India as radical Islamist groups which target India would again come to the fore, and the so far tranquil border may become hot. Indian domestic policy issues like the Citizenship Amendment Act and efforts to dig out illegal migrants in Assam have been emotive issues in Bangladesh as there is a feeling that these are specifically targeted at them.