US space agency NASA has delayed its mission to send a satellite closer to the Sun than any before. It will also be the fastest human-made object ever, navigating around the Sun at speeds of up to 690,000km/h, enabling a travel from New York to Tokyo in under a minute. Parker Solar Probe is...

US space agency NASA has delayed its mission to send a satellite closer to the Sun than any have gone before.

It will also be the fastest human-made object ever, navigating around the Sun at speeds of up to 690,000km/h, enabling a travel from New York to Tokyo in under a minute.

Parker Solar Probe is a planned NASA robotic spacecraft mission to probe the outer corona of the sun. The project was announced in 2009.  The Applied Physics Laboratory of the John Hopkins University has designed and built the space craft. 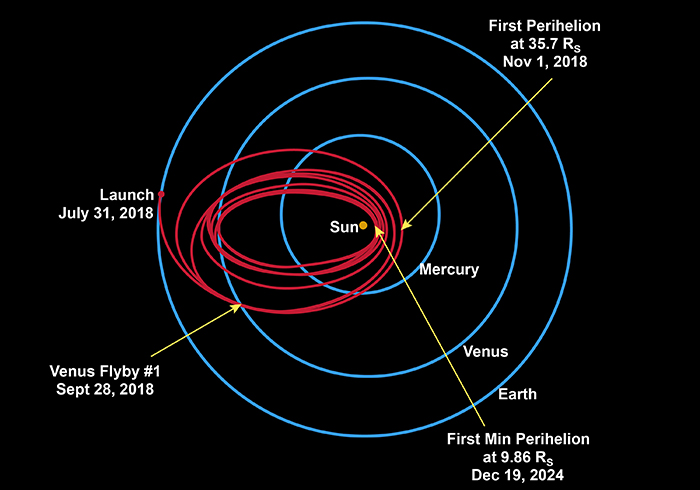 The Parker Solar Probe was set to launch from Cape Canaveral, Florida on 11th August 2018, but last-minute glitches delayed it for 24 hours.

The space agency scrubbed the launch of the United Launch Delta Alliance IV scheduled at 4.28 am EDT.

The launch team, which had received a gaseous red helium alarm, hopes for a 24 –hour turn around to ‘detank‘ and rectify the helium pressure anomaly.

Christened after famed solar scientist Eugene Parker, this is the first NASA mission to be named after a living person. In 1958, Eugene Parker hypothesized the existence of the solar wind, the constant rush of highly charged particles that constantly stream off the sun.

Over the course of seven years, the solar probe will make 24 loops around the sun to study the physics of the corona, the place where much of the important activity that affects the Earth seems to originate.

The probe will dip inside this tenuous atmosphere, sampling conditions, and getting to just 6.16 million km (3.83 million miles) from the Sun's broiling "surface".

Nearly everything on the spacecraft must be fenced behind an 11.5cm-thick (4.5in) carbon-composite sunshield. This will maintain all parts behind the barrier at a tolerable 30C.

The probe is solar-powered. This is a challenge because the solar cells will have to be moved into sunlight to work and they are unable to withstand higher temperatures.

Parker's arrays will have to be water-cooled, with the onboard computer system constantly adjusting their position so that only the minimum surface area necessary to generate power is exposed beyond the shield.

Autonomy is also crucial for this mission. Close to the Sun, the radio interference is intense, and Parker will be out of contact. The probe must manage any faults by itself.

Above all, it has to keep the shield always pointing at the Sun to avoid being destroyed. It's strangely hotter than the Sun's actual surface, or the photosphere. While this can be 6,000 degrees, the outer atmosphere may reach temperatures of a few million degrees.

The European Space Agency has its own version of Parker. Solar Orbiter (SolO) is undergoing final assembly and testing in the UK. It is expected to launch in 2020, arriving at its closest position near the Sun towards the end of Parker's planned seven years of operations.

Being at a more distant position, though, means SolO can do things Parker cannot - like look directly at the Sun. This enables the pair to do complementary science.

Our assessment is that the solar mission will help us better understand the Space Weather Phenomenon. We feel disturbances in the solar wind can shake the Earth’s magnetic field and pump energy into the radiation belts – a phenomenon known as Space Weather. We believe Space Weather can change the orbits of satellites, shorten their lifetimes, or interfere with onboard electronics. We also believe that the eventuality of a tech blackout due to a huge solar storm, like the one being predicted for 2020, could cost global authorities as much as £32 billion a day.