Paris residents have been advised to stay away from the Seine after a high flooding alert issued due to the excessive amount of rain causing the river to overflow its banks..

Paris residents have been advised to stay away from the Seine after a high flooding alert issued due to the excessive amount of rain causing the river to overflow its banks.

The water level in the river is expected to peak at around 6m (19ft 6in), which is at least 4m above its normal level.

The 1910 floods in Paris lasted for two months and took the lives of five people. After a rainy summer and autumn in 1909, the water levels rose and rose and rose. Soon the city looked more like Venice than Paris.

People steered boats down the Rue de Maine (below) and the Cour de Rome near the Saint-Lazare train station. 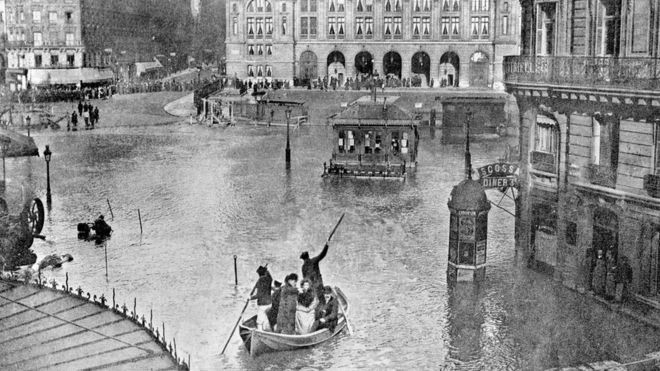 The city became unfamiliar and dangerous. Between January 21st and January 28th that year, thousands of people evacuated. Government engineers built wooden walkways that people could use to get through the flooded streets once the train tracks were submerged.

The electricity failed and even judges needed to bring blankets to court in the cold winter weather.

In March, the city was still flooded. On 15th March, the Seine returned to its normal levels, and the Paris Metro re-opened in April. More than 14,000 buildings had been flooded, including the seat of the National Assembly, the Palais Bourbon.

The traditional yardstick used to check the height of the river is a statue of a soldier at the Alma bridge called the Zouave - the name comes from fighting forces originally drawn from French North Africa who distinguished themselves in the 1854 Battle of the Alma in the Crimean War.

In 2016, there were some hiccups in the city’s plan to fight the flood. The flood warning system suffered a technical failure when pieces of debris in the rising water somehow managed to block the Seine's water-level sensors.

Now, 106 years on, Parisians are using the Zouave statue as a measuring stick again. The water is on course to rise up to 6.5m above its normal level. 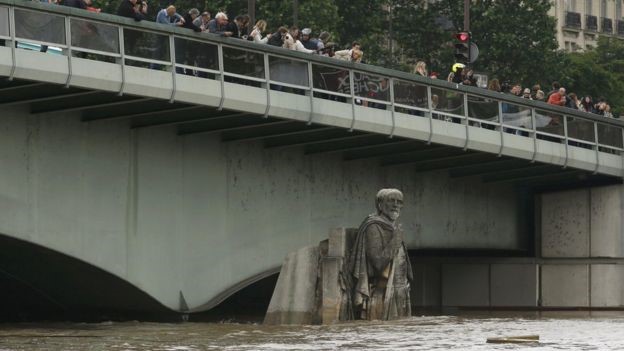 After heavy rains, river cruises and the commuter rail line that runs along the Seine have been shut down. The Louvre museum has closed a lower level housing the Islamic Arts. In the suburb of Villeneuve-Saint-Georges, flooding forced some residents into boats to move along the roads.

The flood emergency level is currently at orange, the highest warning below red. It was not quite the worst flooding Paris has experienced. Riverside homes and businesses in Paris are on high alert as the swollen River Seine threatens to overflow its banks. Some basements in the city have already sprung leaks after the river surged following heavy rainfall, reports said. Rats were spotted scampering outside of popular tourist spot in Paris as the river overflows.

The Seine is forecast to swell even further this weekend, adding several metres of water above its normal level. Many roads in the region are already waterlogged. Boat traffic - including the capital's famous tourist cruises - has also been interrupted.

More than 20,000 people have been evacuated in France since the weekend and around 19,000 homes were without power on Friday. At least two people have been killed in flooding across the country, including a man on horseback who died on Thursday after being swept away by a swollen river in Evry-Gregy-sur-Yerre. The body of an 86-year-old woman was found in her flooded house in Souppes-sur-Loing in central France, where some towns have been hit by the worst flooding in more than 100 years.

The recent December-January period is now the third-wettest on record, according to France's national weather service. Mayor of Paris Anne Hidalgo said the city was coping - but said that the flooding, coupled with recent summer heatwaves, was "clearly a question of the town adapting to climate change".

Our assessment is that the torrential raise which has caused flooding in Paris bears the unmistakable fingerprint of climate change. We believe climate change triggered last year’s European heat wave and the extreme rainfalls in many parts of Europe. The explanation lies in basic physics. A warmer atmosphere can hold, discharge more water.

Over the last 25 years satellites have measured a four percent rise in atmospheric water vapour. We also believe that on current trends temperature is set to rise by another 2-degree centigrade, even taking into account pledges made by all major nations at the recent climate summit.