French President Emmanuel Macron has said that a “Paris-Delhi-Canberra axis” could be “key for the region and our joint objectives in the Indian-Pacific region”..

French President Emmanuel Macron has said that a “Paris-Delhi-Canberra axis” could be “key for the region and our joint objectives in the Indian-Pacific region”. Macron concluded a visit to India in March 2018, where he emphasised strengthening France-India defence ties. France and Australia have both expressed concern about growing Chinese influence in the Pacific.

In recent years, China has expanded its influence in the Asia-Pacific region. China has asserted its claim over the disputed territory in the South China Sea. It has backed these claims with island-building and naval patrols. Additionally, Beijing has expanded its reach in the Indian and Pacific oceans, investing huge amounts in developmental aid and infrastructure in developing island nations including Maldives and Sri Lanka. According to research by the Lowy Institute, China invested $1.8 billion in aid and loans to South Pacific nations between 2006 and 2016. This drew the ire of Australian officials.

Australia has indicated that it is intent on asserting its presence as a regional power in the Pacific. In March, Sydney hosted the ASEAN summit Last month, after three Australian frigates were challenged by Chinese forces in the region, Prime Minister Malcolm Turnbull stated that the Australian navy had a “perfect right” to conduct freedom of navigation exercises in the South China Sea.

India, Japan, Australia, and the United States have reportedly been in talks to establish their own global trade framework. The informal strategic dialogue between the four nations is called the “Quadrilateral Security Dialogue” or the “Quad”.  Security cooperation between the four nations has drawn Beijing’s ire. The quartet held official talks during the 2017 ASEAN Summit in Manila. India and the US have expressed concern regarding China’s growing soft power across the world, and have reportedly engaged in talks on China. The growing trade between India and Japan, and Japan and Australia’s close ties to the United States, has also drawn suspicion from Beijing. India has also strengthened its ties with Vietnam in recent years.

The Trans Pacific Partnership (now the Comprehensive and Progressive Agreement for Trans-Pacific Partnership) was signed by 11 Asia-Pacific countries including Australia, Canada, Japan, and New Zealand earlier this year. President Trump has also indicated that he could be open to re-joining this partnership, which is widely considered to be a means of countering Chinese geopolitical influence in the region. 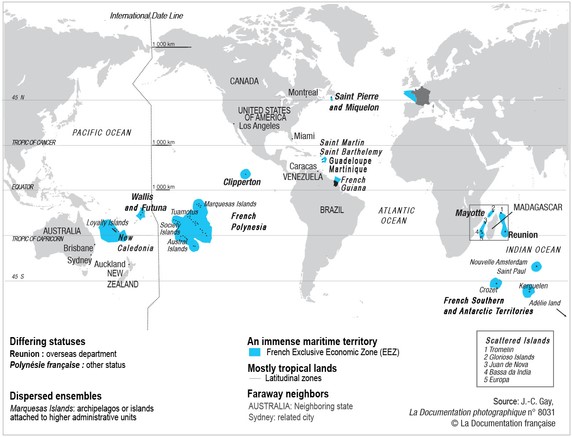 France, which has island territories in the Indo-Pacific, has spoken in favour of collaborating with India and Australia, on common strategic interests in the region. These territories include Reunion and Mayotte in the Indian Ocean, and Noumea, Wallis and Futuna and French Polynesia in the Pacific. France’s Pacific territories account for approximately one third of the Pacific Island’s Exclusive Economic Zone.

In a recent visit to Australia, French President Emmanuel Macron said he wanted to create “strong Indo-Pacific axis to build on our economic interests as well as our security interests.” In 2016, France signed a $50 billion deal to supply the Australian navy with submarines. The same year, France and India signed a $9.4 billion deal for fighter jets.

“Now what is important is to preserve a rule-based development in the region,” said Mr Macron, when asked about the rise of China. “It’s to preserve the necessary balances in the region. It’s important… not to have any hegemony in the region.” “We’re not naive: if we want to be seen and respected by China as an equal partner, we must organise ourselves,” Macron added.

The Australian Prime Minister recognised France as a “Pacific Ocean power”. He emphasised the “Vision of a free, open and prosperous Indo-Pacific”. “That economic rise, that growth, has been enabled and made possible by a rules-based order in our region,” Turnbull said. “The peace and relevant harmony in our region has been enabled by the adherence to the rule of law.”

Australian officials have also expressed willingness to collaborate with India on strategic issues. Former Defence Minister Kevin Andrews noted that India and Australia share an interest in the freedom of navigation in the Indian Ocean region. In 2017, Minister of Foreign Affairs Julie Bishop noted, “Australia and India share converging interests and similar outlooks on the strategic changes taking place in the Indo-Pacific region and globally.”

Our assessment is that Pacific powers have begun to express concern about Chinese influence in the region. India, though facing a similar dilemma in the Indian Ocean, might not significantly benefit from an alliance with Paris and Canberra. We believe that building any further deterrent strategy is going to be an expensive military exercise and India does not have the same economic might.

As stated previously, we believe that India may not be able to presently construct expensive, grandiose strategies such as China’s Belt and Road initiative. Hence, we feel that it would be best to build diplomatic ties and trade networks with other regional and international powers, in order to balance other geopolitical powers in the region.