Panama is prohibiting Venezuelan airlines from operating in the country for a period of 90 days in retaliation for diplomatic and trade bans announced recently by Venezuela..

Panama is prohibiting Venezuelan airlines from operating in the country for a period of 90 days in retaliation for diplomatic and trade bans announced recently by Venezuela.

Panama is a country in Central America bordered by Costa Rica to the west, Colombia to the southeast, the Caribbean Sea to the north and the Pacific Ocean to the south. The capital and largest city is Panama City.

In the 16th century, before the Spanish settlement, Panama was inhabited by several indigenous tribes. Panama was liberated from Spain in 1821 and joined a union of Nueva Granada, Ecuador, and Venezuela named the Republic of Gran Colombia. After Gran Colombia dissolved in 1831, Panama and Nueva Granada remained joined, eventually becoming the Republic of Colombia. With support from the United States, Panama broke away from Colombia in 1903, thus forming the Panama Canal between 1904 and 1914.

In October 1968, Arias Madrid became president of Panama, leading a government of "national union" ending the corruption and making way for a new Panama. A week and a half later, the National Guard (Guardia Nacional) ousted Arias, which later led to the United States' invasion in 1989. Under Commander of the Panamanian and National Guard Omar Torrijos's control, the military transformed the political and economic structure of the country, initiating massive coverage of social security services and expanding public education.

Venezuela is a federal republic on the northern coast of South America, bordered by Colombia on the west, Brazil on the south, Guyana on the east, the Dutch Lesser Antilles to the north and Trinidad and Tobago to the north-east.

In 1522, the territory was colonized by Spain resulting is resistance from indigenous peoples. In 1811, it became one of the first Spanish-American territories to declare independence in 1821, after becoming a part of the federal republic of Gran Colombia. It gained full independence as a separate country in 1830. Venezuela suffered political turmoil and autocracy, remaining dominated by regional military rule until the mid-20th century.

Since 1958, the country has had a series of democratic governments. Financial crisis in the 1980s and 1990s led to several political crises, including the deadly Caracazo riots of 1989, and the impeachment of President Carlos Andrés Pérez for embezzlement of public funds in 1993. In the early 20th century, Venezuela discovered oil and has since become the world's largest known oil reserves and one of the world's leading exporters of oil. Previously, the country was an underdeveloped exporter of agricultural commodities such as coffee and cocoa, but oil quickly came to dominate exports and government revenues. 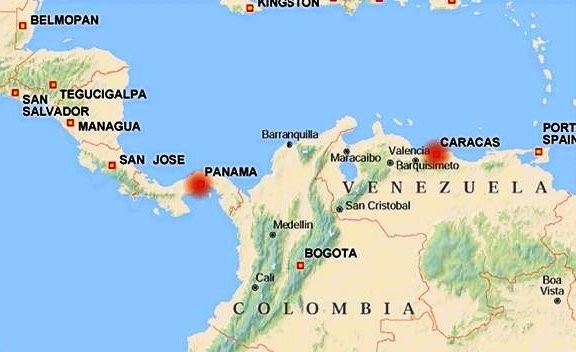 Venezuela banned key Panamanian businesses from operating in the country after Panama’s government put Venezuelan President Nicolas Maduro on a list of Venezuelan officials deemed to be at “high risk” for money laundering. The ban included businesses of Panamanian President Juan Carlos Varela and Copa, one of the few airlines still operating within Venezuela.

A message sent out by Venezuela stated: “The Government of Venezuela has decided to suspend economic and financial relations with legal entities and individuals from Panama for 90 days.” Venezuelan authorities exclaimed that the decision was aligned with the requirement to protect its financial system. Interaction with 46 legal entities and 22 individuals has been suspended overall.

Panamanian President Juan Carlos Varela and nearly 24 cabinet ministers and key officials had been sanctioned for the alleged rigging of Panama’s financial system to sabotage the Venezuelan economy. Last year, political violence in Venezuela killed more than 120 people from both the government and opposition camps.

The latest move enforces that the ban on cargo and passenger flights will begin on April 25. It is expected to affect at least 10 Venezuelan companies. Panama’s embassy in Caracas is open with a skeleton staff. After the ban was announced, several international airlines have pulled out of Venezuela, citing economic and security concerns. However, a few flights presently operating are Air France, American Airlines, Cubana, Iberia of Spain, Swift Air from the US, and Turkish Airlines.

Our assessment is that the ongoing turbulence between the two nations is expected to continue. We believe that the Panamanian authorities will evaluate the impact of these measures in the economic and commercial sphere and identify other possible future actions. Latin American leaders are meeting in Peru later this week to evaluate the situation and arrive at a conclusion.