After a minor slump, oil prices continue to gain on February 23rd, 2018. The value rose to the highest in two weeks and was partly due to the shutdown of an oilfield in Libya..

After a minor slump, oil prices continue to gain on February 23rd, 2018. The value rose to the highest in two weeks and was partly due to the shutdown of an oilfield in Libya. In addition, Saudi Arabia has also expressed an optimistic outlook that the OPEC led production cuts were working.

Oil prices have been one of the most watched trends in economics during the 21st century. From 2000 to 2008, the price of oil saw an unprecedented spike, going from under $25 per barrel to almost $150 per barrel. Rapidly increasing demand in emerging economies such as China and India and production cuts by the Organization of Petroleum Exporting Countries (OPEC) in the Middle East drove the price of oil to record heights.

From 2010 until mid-2014, world oil prices were around $110 a barrel. However, the price of oil has fallen significantly in the recent years. It is now around $60. To address the sluggish prices, OPEC nations came to an agreement in November 2016 to cap their output until the oil glut was reduced.  In May 2017, they agreed to extend that deal by nine months. This isn’t the first-time oil prices have been severely hit due to a glut. Prices of oil fell in the 80s due to falling demand. It resulted in a six-year decline in the price of oil.

In November, due to various factors, price of oil rose to its highest since mid-2015. Brent crude futures LCOc1 were up 59 cents at $61.53 per barrel having hit a session peak of $61.70 earlier. On December 2017, OPEC as well as Russia announced that the nations would continue to maintain the output cut till the end of 2018. 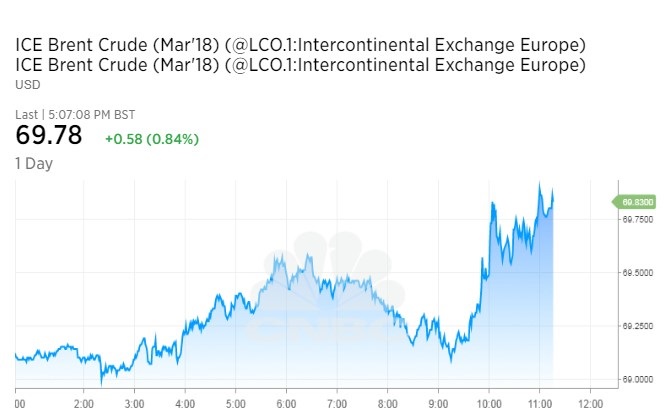 Saudi Arabia’s oil minister Khalid al-Falih said that the OPED-led effort to curb production in order to address oil glut was working. He even laid out probable steps on possible next steps that will be taken by OPEC. He said, “The next step may be easing of the production constraints. My estimation is that it will happen sometime in 2019. But we don’t know when and we don’t know how.”

Brent crude futures rose to $67.37 per barrel, which was the highest global benchmark in over two weeks. Brent crude futures saw a gain of 1.4%. In addition to the Saudi minister’s optimistic comments, oil prices also rose due to an outage in Libya. The El Feel oilfield that produces 70,000 barrels per day of crude was shutdown. Libya continues to be a volatile market.

“Libya is another outage,” said John Kilduff, partner at investment manager Again Capital in New York. “This market has benefited from a series of them over the past several months now, whether it’s the Keystone, the North Sea (Forties), and now this.”

Experts have stated that they expect oil prices to continue performing well in the near future. ANZ Research analysts wrote in a note to their clients, “The unexpected fall in oil inventories in the U.S. should see support for crude oil prices remain strong. Prices were also supported by comments from UAE Energy Minister Suhail Al Mazrouei, who said the worry is undersupply, not oversupply, as demand remains strong amid the constraints on output.”

However, rising production in the US will likely hinder OPEC’s efforts (and Russia’s as well). “Robust oil production in the U.S. will continue to cap price gains,” said Abhishek Kumar, senior energy analyst at Interfax Energy’s Global Gas Analytics in London.

Our assessment is that oil prices are likely to hover a little over $60 in the near future due to aggressive efforts by the OPEC nations as well as Russia. However, there are fears of an overheated market as US production of Shale continues to grow in record numbers.