International oil prices have fallen for six days straight due to sharp decline in the global equity markets. The price of Brent oil was at $64.34 a barrel, down from $64.90..

US crude output has also increased exponentially and has contributed to concerns about a sharp rise in global supplies.

Oil prices have been one of the most watched trends in economics during the 21st century. From 2000 to 2008, the price of oil saw an unprecedented spike, going from under $25 per barrel to almost $150 per barrel. Rapidly increasing demand in emerging economies such as China and India and production cuts by the Organization of Petroleum Exporting Countries (OPEC) in the Middle East drove the price of oil to record heights.

From 2010 until mid-2014, world oil prices were around $110 a barrel. However, the price of oil has fallen significantly in the recent years. It is now around $60. To address the sluggish prices, OPEC nations came to an agreement in November 2016 to cap their output until the oil glut was reduced.  In May 2017, they agreed to extend that deal by nine months. This isn’t the first-time oil prices have been severely hit due to a glut. Prices of oil fell in the 80s due to falling demand. It resulted in a six-year decline in the price of oil.

In November, due to various factors, price of oil rose to its highest since mid-2015. Brent crude futures LCOc1 were up 59 cents at $61.53 per barrel having hit a session peak of $61.70 earlier. On December 2017, OPEC as well as Russia announced that the nations would continue to maintain the output cut till the end of 2018. 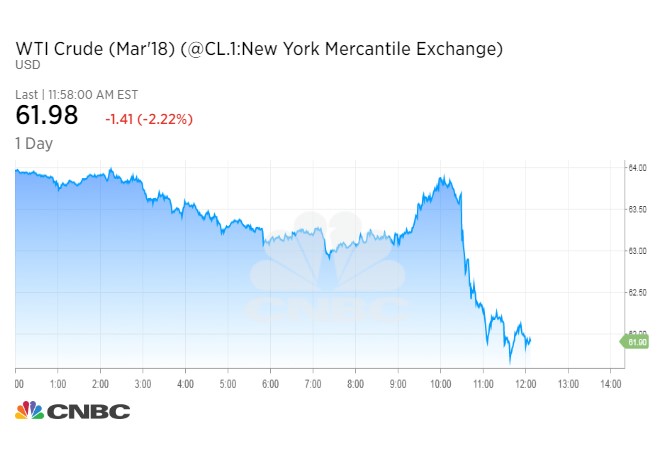 Additionally, as US crude output has reached a record high, there are growing concerns about a sharp rise in global supplies. Government data has revealed that U.S. crude and fuel stockpiles rose last week, while American drillers continue to increase production. "The report was unilaterally negative — not only did it show builds in both crude and refined products, but what spooked the bears is that U.S. production hit a fresh record high of 10.25 million" barrels per day, said Tamar Essner, director of energy and utilities at Nasdaq Corporate Solutions.

“US output is now above Saudi Arabia at 10.25 [million barrels a day], and this has spooked some investors,” ANZ analysts commented. “On a technical basis, crude oil prices fell below its 50-day moving average, adding to the selling that emerged earlier this week.”

The output from US has grown exponentially in the recent times. U.S. now produces more oil than top exporter Saudi Arabia. Some estimates suggest that America will be able to overtake Russia as the top producer in the world by the end of 2018.

There are also other concerns of an overheated market. “One area of concern, particularly in Asia, is that of (low) refining margins ... This drop in margins could reduce Asian refiners’ demand for incremental crude in the near term and weigh on global prices,” said Sukrit Vijayakar, director of energy consultancy Trifecta.

Our assessment is that as US output increases, there are growing fears of an overheated market that could further offset oil prices. Unless Saudi Arabia along with OPEC can convince United States to cooperate, the glut will not be solved and the prices will continue to remain circa $60. However, with US production being its highest in 30 years, this is a highly unlikely scenario. The increase in shale oil production has given the United States a new global footing as well as self-reliance.