The Organization for Economic Co-operation and Development (OECD) upgraded its global growth forecasts for 2018 as well as for next year, while also raising..

The Organization for Economic Co-operation and Development (OECD) upgraded its global growth forecasts for 2018 as well as for next year, while also raising concerns over the risk presented by increasing trade protectionism.

The Organization for Economic Co-operation and Development is an intergovernmental economic organization with 35-member countries, founded in 1961 to enhance economic progress and world trade. It is a forum of countries committed to expanding the market economy, primarily by providing a platform to compare policy experiences, identifying good practices, and coordinating domestic and international policies of its members. Most OECD member states are developed economies with high incomes and have a high Human Development Index (HDI). OECD is an official United Nations Observer. The OECD's headquarters is situated at the Château de la Muette in Paris, France. It is funded by contributions from member states and had a total budget of €363 million in 2015.

OECD releases its economic outlook projections twice a year in order to provide a consistent view of the world economy, while focusing macroeconomic developments in current and prospective OECD member countries and non-OECD economies, such as Brazil, Russia, India and China. The projections are made for a range of important macroeconomic indicators, which include supply side and labor market indicators, wage and price inflation measures, monetary conditions, public sector accounts, trade volumes, balance of payments accounts for member countries. For non-members, it forecast is less detailed including GDP, inflation, fiscal, trade, and current account balances for and larger economies, and main trade aggregates. 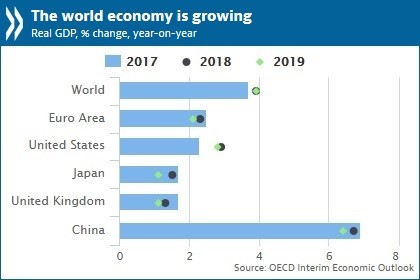 Presently, the OECD has revised its outlook for 2018 global growth from 3.7% in November 2017 to 3.9% resulting from improvements expected in every country, except Russia. For 2019, the OECD sees greater improvements in the growth outlook with the global economy expected to expand 3.9%. Nevertheless, according to the OECD, trade barriers, especially rising from the Trump administration’s tariffs on steel and aluminum, pose a risk to the strengthening of the global economy.

The body stated that the world economy is seen to be growing at its historical, normal rate. However, OECD’s prediction of an optimistic forecast for the upcoming years is based assumptions of higher investment and trade without any new tariffs or other barriers to commerce.

The UK was singled out with the lowest projections among the leading advanced and emerging economies across 2018 and 2019, with only 1.3% growth forecast this year and 1.1% in 2019.

Our assessment is that the implication of OECD’s latest forecast is that a rise in tariffs between the US and its trading partners could harm the positive effects on US growth post the Trump tax cuts. Trade protectionism still remains a key risk that would negatively affect confidence, investment, and jobs across the economies. Continuous rise in inflation could hurt household income growth and consumer spending, especially as business investment is deteriorating due to uncertainty surrounding the future relationship between the UK and the EU.