Western Balkan nations are facing a growing debt risk partly due to the China-led infrastructure development project. The International Monetary Fund has said..

The International Monetary Fund has said that the Belt and Road Initiative of the Chinese government is partly responsible for it.

China’s One Belt One Road Initiative (OBOR) was announced in 2013. Hailed as a “21st Century Silk Road”, the initiative seeks to revive trade routes across Eurasia. OBOR has been publicised as a development strategy that involves huge amounts of physical infrastructure, including railroads, highways, ports, and pipelines. China also claims that it will enhance financial linkages and increase cooperation across the landmass. According to the World Bank, OBOR has the potential to include “65 countries, 4.4 billion people, and about 40% of the global GDP”.

The proposed economic corridor is divided into the land-based Silk Road Economic Belt (SREB) and the 21st Century Maritime Silk Road (MSR). The land route is intended to stretch from central China through Central Asia and Russia, into Western Europe. The oceanic “road” includes ports and littoral infrastructure across South and South East Asia, the Gulf, and ends in East Africa and the Mediterranean. The European route would link China (14% of world GDP) to the EU (21% of world GDP). 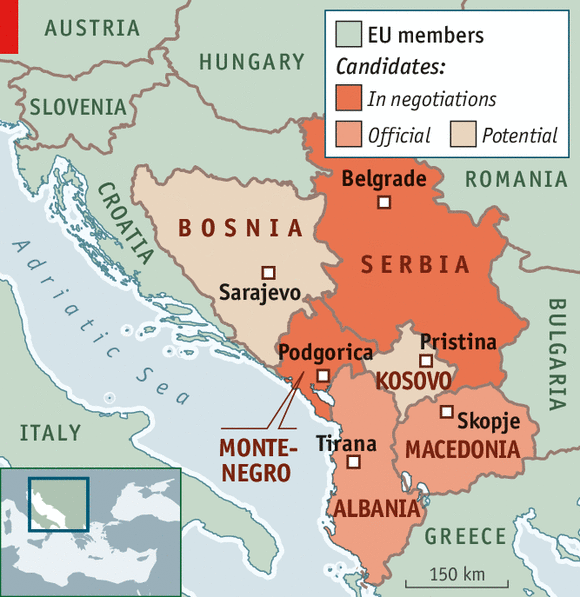 Western Balkans nations are generally thought to include Serbia, Bosnia and Herzegovina, the Former Yugoslav Republic of Macedonia, Albania, Montenegro, and Kosovo. According to the World Bank, GDP growth in the Western Balkans slowed from 3.1% in 2016 to an estimated 2.4% in 2017. However, despite slow growth, unemployment and poverty both fell in most countries.

The Western Balkan nations are facing a growing debt risk, and China-led infrastructure development projects are partly to blame, the International Monetary Fund warned this week.

The IMF document highlighted the Bar-Boljare highway – a Beijing-funded project being built under the auspices of China’s “Belt and Road Initiative” – to connect Montenegro’s coast with its landlocked neighbour Serbia. The road development, it said, has contributed to the country’s economic growth but also created high levels of public sector debt.

The first phase of the scheme was financed with loans from China’s Export-Import Bank between 2015 and 2017, which “had a key role in raising debt to high levels”, and has cost the country nearly a quarter of its gross domestic product, the report said.

In an effort to service the loans, the government of Montenegro last year slashed its public welfare spending, cut wages for government employees, and introduced tax increases on cigarettes, coal and ethyl alcohol.

The report said that without the highway project, the fiscal adjustment would not have been necessary, and the country’s debt would “have declined to 59% of GDP in 2019 instead of rising to 78%”. 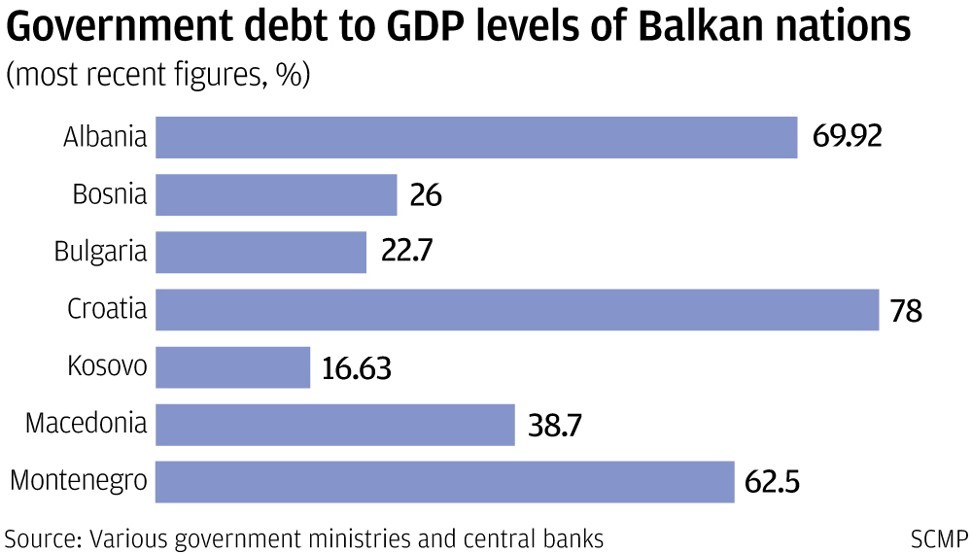 On a recent trip to the Balkans in February, German Chancellor Angela Merkel warned about China’s growing influence in the region, saying that while she welcomed Beijing’s investment, she questioned whether it was linked to a political agenda.

Meanwhile, an IMF monitoring report on Albania published on Tuesday called on the country to redouble its efforts to reduce its high public debt. While Beijing has limited involvement in Albania’s public finances, China Everbright Group owns Tirana International Airport, and other Chinese companies hold stakes in the country’s oilfields. China and Albania have agreed to expand their cooperation, and while on a visit to the European country last year, Beijing officials encouraged Tirana to speed up the signing of a memorandum of understanding on the Belt and Road plan.

Earlier this year, 27 out of 28 EU ambassadors in Beijing, with Hungary the only exception, reportedly signed a document denouncing the global infrastructure project for hampering free trade and giving an advantage to Chinese companies.

The document said China was attempting to shape globalisation to suit its own interests, and the Belt and Road Initiative – which involves a series of transcontinental infrastructure projects to link China with Europe and Africa – is “pursuing domestic political goals like the reduction of surplus capacity, the creation of new export markets and safeguarding access to raw materials”.

China has argued in favour of this initiative, noting that this could potentially revive and boost the economies of multiple countries across the world including Pakistan. It has responded to criticisms that OBOR lacks transparency by emphasising that there are “no back-room deals” when it comes to OBOR. “It is a transparent initiative that follows the golden rules of extensive consultation, joint contribution and shared benefits,” Foreign Minister Wang Yi said earlier this year.

Our assessment is that the One Belt One Road initiative will be a debt burden to countries who cannot repay the cost of such loans, as was the case with Sri Lanka. Struggling to pay off its debt to Chinese firms, Sri Lanka was compelled to hand over the strategic port of Hambantota to China on a 99-year lease. We believe countries while aggressively pursuing to build infrastructure must ensure that there is a strong business case for building such facilities in the short to medium term. In the case of Hambantota, the port could not attract sufficient cargo to service the debt.