China’s multi-billion-dollar project One Belt, One Road (OBOR) infrastructure development project is a manifestation of the nation’s ambition. Experts and keynote speakers present at Synergia Conclave..

China’s multi-billion-dollar project One Belt, One Road (OBOR) infrastructure development project is a manifestation of the nation’s ambition. Experts and keynote speakers present at Synergia Conclave – Security 360 spoke about OBOR and the global power game initiated by Chinese President Xi Jinping. Will the OBOR result in a new world order?

China has initiated a Twenty-First Century Maritime Silk Road – ‘One Belt One Corridor’ that focuses primarily on connecting and encouraging cooperation among Eurasian countries. The emphasis is on enhancing land as well as maritime routes. The policy is significant for China as it aims to boost domestic growth in the country. It is part of China’s strategy for economic diplomacy as it underlines China’s goal to undertake a larger role in global affairs.

Most of the South Asian countries have signed the deal.  India has however maintained a strong stand of not being party to the joint initiative. It was abstaining from the OBOR forum that was held recently, India’s main concern is that the ‘China Pakistan Economic Corridor’ (CPEC) which is part of OBOR runs through Pakistan occupied Kashmir. However, China has not yet tried to address this issue.

OBOR is a development strategy that focuses on connectivity and cooperation between Eurasian countries, primarily the People's Republic of China (PRC), the land-based Silk Road Economic Belt (SREB) and the oceangoing Maritime Silk Road (MSR). The strategy underlines China's push to take a larger role in global affairs with a China-cantered trading network. The future of trade in Asia could depend heavily on what becomes of China’s expansive One Belt, One Road initiative. 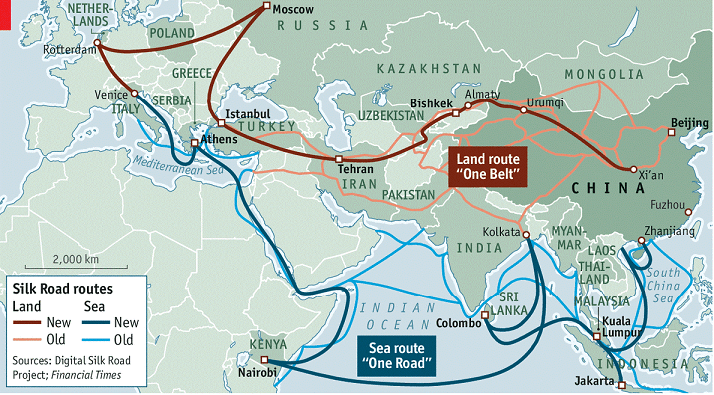 Interesting perspectives and insights were shared at the session of ‘OBOR and the Emerging World Order’. Speakers Krishnan Srinivasan Former Foreign Secretary, Government of India, Daisuke Kotagawa, Former Managing Director of IMF, Japan; and Patrick Cronin, Director, Centre for New American Security, Washington spoke about their perspectives on the issue of China initiating the mega project One Belt One Road.

Srinivasan spoke about the OBOR initiative and on whether it sets up the possibility of a new “Chinese empire”. He said, “China’s economy is moving from one based on investment to one resting in domestic consumption.” He expressed an interesting and often unheard perspective – that cooperation, a direct approach and exploration of the opportunities that the project would entail for India – should not be an unthought of idea. Much can be gained from direct interaction, instead of a reactive automatic response of perceiving hostility in all China’s actions.  India could gain much, he said, if alternate approaches were envisaged. Ultimately, he noted that this initiative was keeping with “our times".

Patrick Cronin shared about how Washington is looking at the OBOR issue, since it was an economic and security concern, but also an opportunity at the same time. So, the idea is to not oppose it entirety but keep a watch over how they are meeting standards like transparency etc. The country is trying to look at how collaborations can be made, and partnerships forged in this opportunity. Geopolitically the opportunity of OBOR cannot be ignored, but this is also a test of China’s willingness to cooperate, and engage in open dialogue. He specifically reminded that for a city like Bangalore it is important to think about a Digital Silk Road when considering OBOR. Also, it is important to think of alternate approaches, and develop ways that can encourage China’s growth without compromising the neighbouring countries.

Our assessment is that China’s OBOR project is both an  opportunity and a test case for China to invent a new economic model based on the principle of peaceful co-existence and a region sans geo political rivalries. We believe that the one major risk is that the project is being done outside the ambit of multilateralism. There is a growing concern that China would use the OBOR infrastructure to export its surplus production to other countries causing severe damage to their local industry. If the OBOR project was to fructify, we will see more infrastructure being developed in the next four decades compared to what we saw in the last four thousand years.