A new study by the World Health Organization and the Imperial College of London has revealed that the number of obese children and teenagers across the world has increased..

A new study by the World Health Organization and the Imperial College of London has revealed that the number of obese children and teenagers across the world has increased by ten times over the last 40 years.

Obesity is defined as abnormal or excessive fat accumulation that may impair health. Childhood obesity is a medical condition that affects children and teenagers. Childhood obesity results in other more serious medical problems in the children. Some of these medical issues were once considered “adult diseases.” This includes medical problems like diabetes, high blood pressure and high cholesterol.

Childhood obesity is one of the most serious public health challenges of the 21st century.

In contrast there is also the problem which is referred to as the triple burden of malnutrition. It is the existence of overnutrition, undernutriton, and micronutrient deficiencies. Tackling the triple burden serves multiple purposes. Research shows that food insecurity is one of the main drivers of conflicts in various regions across the world. By addressing these problems, governments build resilience to conflicts. This results in the improvement of economic development. This also improves the overall health of residents in a nation.

In September 2017, Synergia Foundation jointly organized a round table discussion along with the Agriculture department, Government of Karnataka on ‘Choke Points: Food and Nutritional Security.’ Details of the event can be found here. 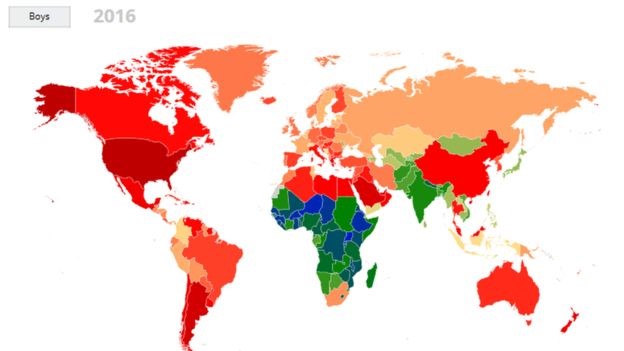 The study by experts from WHO was based on data of 31.5 million children and adolescents worldwide to estimate trends in body mass index (BMI) from 1975 to 2016. The study notes that the number of obese girls aged between 5 and 19 rose from 5 million to 50 million. The number of obese boys under the same age bracket rose from 6 million to 74 million.

The report's findings "highlight, remind and reinforce that overweight and obesity is a global health crisis today, and threatens to worsen in coming years unless we start taking drastic action", said Dr Fiona Bull, a program coordinator for the WHO.

Majid Ezzati, professor of global environmental health at Imperial College London in the UK, who led the research spoke about the study noting, “Over the past four decades, obesity rates in children and adolescents have soared globally, and continue to do so in low- and middle-income countries. More recently, they have plateaued in higher-income countries, although obesity levels remain unacceptably high.” According to Ezzati, there are now children gaining weight when they are just five years of age. This wasn’t the case two generations ago, according to the researchers.

Of all the nations taken into consideration, US has the highest obesity rates for girls and boys of about 20 per cent. In Europe obesity rates among children hovers between 7% and 10%. However, Ezzati notes that there is still an urgent need to address food security in many parts of the world. He said, “There is a continued need for policies that enhance food security in low-income countries and households, especially in south Asia. But our data also show that the [change] from underweight to overweight and obesity can happen quickly in an unhealthy nutritional transition, with an increase in nutrient-poor, energy-dense foods.”

Excessive weight among children often sets them up for medical problems that can last for a lifetime and are very hard to reverse. Nearly 200 million children are either moderately or severely overweight. The report’s authors argue that the rise in obesity could also be related to increased consumption of highly processed and energy-dense foods. He said, “We need ways to make healthy, nutritious food more available at home and school, especially in poor families and communities, and regulations and taxes to protect children from unhealthy foods.”

Our assessment is that childhood obesity is a problem that needs to be addressed urgently by governments across the world. As economies have progressed, the obesity rates among children and adults have also increased. We believe that it is extremely important to assist families to tackle the social and environmental conditions that better their ability to make changes to their obesity related behavior. It is important to have periodic checks on Body Mass Index (BMI) and ensure that corrective measures are taken to improve the BMI.