North Korea has continued to generate revenue through business agreements with African nations despite harsh sanctions by the UN.

North Korea is one of the most secretive and isolated nations in the world. It emerged in 1948 after World War II. Prior to that, there had been only one region called Korea, which was under Japanese rule. Towards the end of the World War II, Soviet troops advanced towards Korea to take over from the vanquished Japanese forces. The United States, which by then had begun to distrust the Soviets, requested them to stop their offensive. By 1948, the country was partitioned into North and South Korea. In 1950, North Korea supported by Chinese and Russian forces invaded South Korea. US forces along with the United Nations intervened on behalf of South Korea and the invading army was driven out.

A Communist nation, the North Korean society is a result of rigidly controlled state-rule. The totalitarian society has resulted in stagnation in economy and a leadership dependent on the cult of personality. The country, home to 24.5 million people, has often been witness to crippling famine. The region has also been accused of violating basic human rights.

The North Korean nuclear program in particular has been a source of concern for the international community. In 2017, it launched 22 missiles in the span of 15 tests. In response to North Korea’s activities, the United Nations imposed two rounds of fresh sanctions. There is now a ban on textile exports and a call to reduce oil imports by 30%. There is also a ban on hiring North Korean workers overseas. There are currently 100,000 North Koreans employed outside of the country. North Korea’s economy would be particularly hit as its trade with China has also been affected. The combined value of North Korea’s 2016 export to China, of coal, iron-ore, lead-ore, and seafood, all of which are now banned, was almost $1.5 billion. This is about 60% of its total exports. 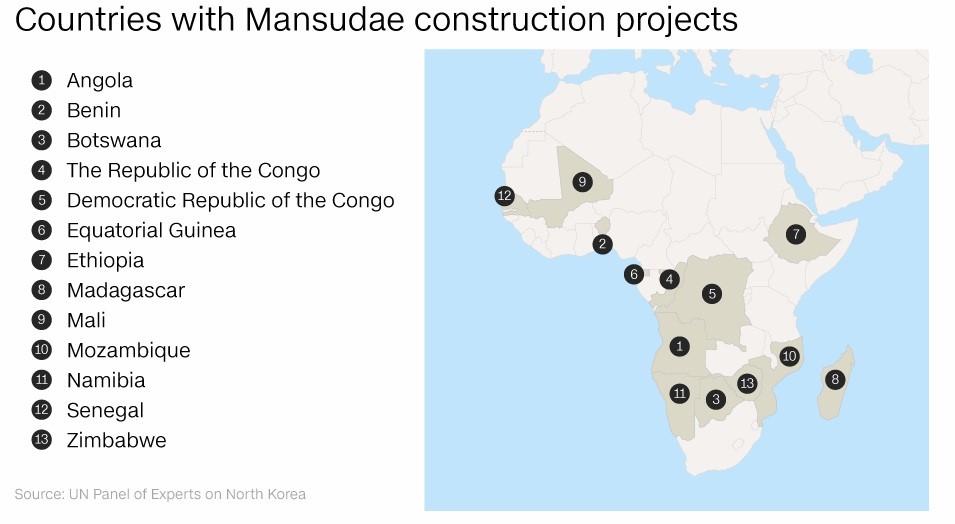 Despite sanctions, experts believe that North Korea has continued to make income through various illicit activities. For a more detailed look at how money laundering in Hong Kong has benefitted North Korea, click here.

Another key source of North Korean revenue is through various businesses the nation has struck with African nations. For instance, a North Korean company called Mansudae was in-charge of building memorial statues in Namibia. According to the UN, the money that North Korea makes from such transactions is notable.

"This money is highly significant," said Hugh Griffiths, the coordinator of the UN Panel of Experts on North Korea, the body charged with monitoring sanctions enforcement on the country. "We are looking at at least 14 African (UN) member states where Mansudae alone was running quite large construction operations -- building everything from ammunition factories, to presidential palaces, to apartment blocks."

Mansudae Overseas Projects is a construction company based in Jongphyong-dong, Phyongchon District, Pyongyang, North Korea. It is the international commercial division of the Mansudae Art Studio. As of August 2011, it had earned an estimated US$ 160 million overseas building monuments and memorials.

Mansudae has been under additional scrutiny from the UN since late 2016. Democratic Republic of Congo, Uganda, Tanzania and Angola are the other countries which are yet to respond to the UN report regarding North Korean sanctions.

"It's a function of not being forthright and dragging your feet. All of those things give the opportunity for those types of governments to use plausible deniability," said John Park, director of the Korean Working Group at Harvard's Kennedy School of Government.

According to the UN panel, North Korea’s association with Africa goes beyond building statues – there’s ammunition involved as well. The panel maintains that Namibia contracted North Korean workers and state companies to construct a munitions factory. This is a violation of the sanctions.

African nations for their part are maintaining that they have not gone against the UN dictate. Hassan Abbas, a Tanzanian government spokesman has said, “Yes, we had some kind of relationship with North Korea in the past, but when sanctions came into effect we broke off all ties with North Korea. Additionally, Uganda's military spokesman has said that any military contact with North Korea has ended. "The last North Koreans left in September. They were training our forces in martial arts and supporting us to upgrade our military capability," said Brig. Richard Karemire, a spokesman for the Ugandan Army. "Inform the whole world that Uganda is in full compliance."

Our assessment is that it is clear that despite harsh sanctions by the UN, North Korea has continued to find loopholes to continue generating revenue. This is a concern for the international community as the money will be channeled towards its military expansion. If North Korea becomes capable to mounting a nuclear warhead on its intercontinental ballistic missile, then the threat of war becomes more omnipresent.