North Korea’s Korean Central News Agency has announced that Pyongyang is stopping nuclear tests and ballistic missile launches at its only test site, Pyunggye-ri. Diplomatic ties between North Korea, and the US and its allies have improved since the beginning of this year. North Korea has indicated that it is willing to discuss denuclearisation.

The Democratic People’s Republic of Korea exists in self-imposed isolation. North Korea’s nuclear programme can be traced back to 1962. The country committed itself to what it called “all-fortressization”, which was the beginning of the hyper-militarized North Korea of today. Much of its initial programme was set up with the help of the Soviet Union. North Korea's nuclear weapons program began in the 1980s. In 1985, North Korea ratified the NPT but did not include the required safeguards agreement with the IAEA until 1992. It was no longer a signatory of the Non Proliferation Treaty (NPT) as of 2003.

In 2006, after North Korea conducted its first nuclear test, the UN Security Council passed harsh economic sanctions on the region. However, undeterred, North Korea has continued its nuclear programme. In 2017, it conducted over 20 missile test launches and conducted its sixth nuclear test, which was the nation’s most powerful test yet. According to reports, the country detonated a hydrogen bomb that could be mounted on an intercontinental ballistic missile. In July 2017, North Korea successfully test launched two intercontinental ballistic missiles (ICBM). In August 2017, it flew a missile over Japan and called it the “first step” in its Pacific operations.

The US and the UN have sought to impose fresh sanctions on North Korea to exert financial pressure on the nation to force it to back down from its nuclear program. Currently, there is a ban on textile exports and a call to reduce oil imports by 30%. Other export bans include coal, iron, lead, and seafood. There is also a ban on hiring North Korean workers overseas.

In March 2012, it was reported that North Korea had agreed to halt nuclear tests, long-range missile launches and enrichment activities, in return for food aid from the US. However, only a month later, the Obama administration announced that it was scrapping the plan. Pyongyang had violated the missile test moratorium agreement and announced a new rocket launch. 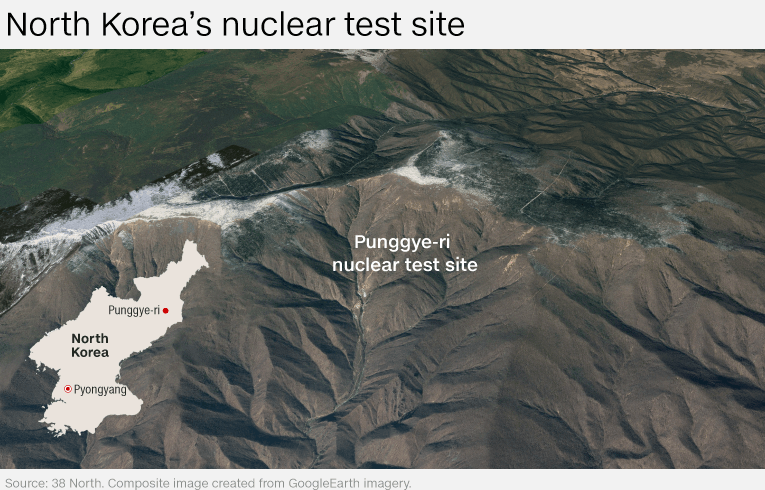 Diplomatic ties between North Korea and other nations have improved since the Pyeongchang Winter Olympics, which were hailed as the “Peace Olympics” earlier this year. President Kim Jong-Un recently concluded “successful talks” with Xi Jinping, and has arranged to meet with President Trump. Kim has stated that he is open to the possibility of denuclearisation. On Thursday, South Korean President Moon Jae In told reporters that “North Korea is expressing a will for a complete denuclearization,” which is not conditional on the removal of American troops from the region.

North Korea’s state news agency has reported that Pyongyang will now stop nuclear tests and ballistic missile launches. “The northern nuclear test ground of the DPRK will be dismantled to transparently guarantee the discontinuance of the nuclear test,” Korean Central News Agency said on Friday. According to the KCNA, Kim Jong-un stated that the nation no longer needs these tests as the test site has “finished this mission.” “We will concentrate all efforts on building a powerful socialist economy and markedly improving the standard of people’s living through the mobilisation of all human and material resources of the country,” KCNA said. According to a North Korea source cited by CNN, the Kim regime has shifted his focus to economic growth, and is seeking to normalise relations with the international community.

Donald Trump responded positively to the announcement. “North Korea has agreed to suspend all Nuclear Tests and close up a major test site. This is very good news for North Korea and the World - big progress! Look forward to our Summit,” he wrote on Twitter. “Progress being made for all!” South Korea expressed similar sentiments. "It will also contribute to creating a very positive environment for the success of the upcoming South-North summit and North-United States summit," a statement from Moon Jae-in’s office read. China noted that the move would "help ameliorate the situation on the peninsula".

Some analysts noted that this decision is a significant step towards denuclearisation, and expressed belief that these actions indicate a positive outcome to the upcoming summits. “We’re all looking for evidence that Kim is really serious about negotiations, and announcements like this certainly suggest he is, and that he is trying to make clear to the world that he is,” said David Wright, co-director of the Global Security Program at the Union of Concerned Scientists.

Critics have noted that with this announcement, North Korea has merely signalled a “freeze” in its program. It has not committed to destroying its current arsenal. According to some, it is likely that the program has been concluded as Kim Jong-un is “satisfied” with the status of the current weapons program. Additionally, there may be fears that the Punggye-ri test site has become unstable.

Further more, it has been pointed out that “denuclearisation” means different things to both sides. To Trump and its allies, denuclearisation means the handing over of all nuclear weapons and missile systems, as well as allowing inspections to check the development of such weapons. On the other hand, to Pyongyang, this may mean mutual disarmament, commentators have observed.

Japan has remained critical, and the US has also noted that it will continue applying “maximum pressure” on the Kim regime. “What’s important is that this leads to complete, verifiable denuclearisation. I want to emphasise this,” Japanese Prime Minister Shinzo Abe told reporters. The contents of this announcement are insufficient to satisfy us,” said Defence minister Itsunori Onodera. He said that North Korea would have to give up its ballistic missiles and nuclear weapons.

Our assessment is that if legitimate, the shutdown of the Punggye-ri site is a step towards global peace. However, North Korea has reneged on its promise to denuclearise before. North Korea’s nuclear and military capacity is not only its primary bargaining chip with the international community, it has also become a symbol of prestige for the Kim regime. Additionally, as we had mentioned earlier, Kim Jong-un would not want to share the same fate as the former Libyan leader Muammar Gaddafi. Is this a legitimate step towards denuclearisation, or another false alarm?