North Korea has not halted its nuclear missile programme and is trying to sell weapons to the Middle East and Africa, a UN report has found. The North Korean nuclear program has been a source of concern for the US and the international community for decades.Since...

North Korea has not halted its nuclear missile programme and is trying to sell weapons to the Middle East and Africa, a UN report has found.

The North Korean nuclear program has been a source of concern for the US and the international community for decades. Since January 2018, Pyongyang appeared to have softened its stance, initiating diplomatic meetings. On April 27th, North and South Korean leaders Kim Jong-Un and Moon Jae-In held a historic summit, the first in over a decade. The two nations announced that they had agreed to end the 60-year Korean War and signed the Panmunjom Declaration which agreed to denuclearise North Korea. A meeting was also arranged between the North Korean leader and the US President, the first of its kind.

However, North Korea reverted to a more aggressive stance by cancelling a meeting with South Korean officials. National Security Advisor John Bolton said that the United States was looking at a 2004 “Libya model” to denuclearise North Korea. Pyongyang responded that they would “no longer be interested” in dialogue if the US was trying to push for “unilateral nuclear abandonment.” It threatened a "nuclear-to-nuclear showdown". US President Trump cancelled the summit on May 24th, due to Pyongyang’s “tremendous anger and open hostility”.

The historic Singapore Summit was back on for June 12th. The summit saw the two leaders agreeing to begin a diplomatic process to “work toward complete denuclearization of the Korean Peninsula.” The denuclearization pledge taken had no time frame. Recently, a US based think-tank, North 38, released satellite images of North Korea’s Sohae Station, indicating progress in the pledge made at the Singapore Summit. However, recently, U.S. spy agencies saw signs that North Korea is constructing new missiles at the Sanumdong facility that produced the country’s first intercontinental ballistic missiles capable of reaching the US. 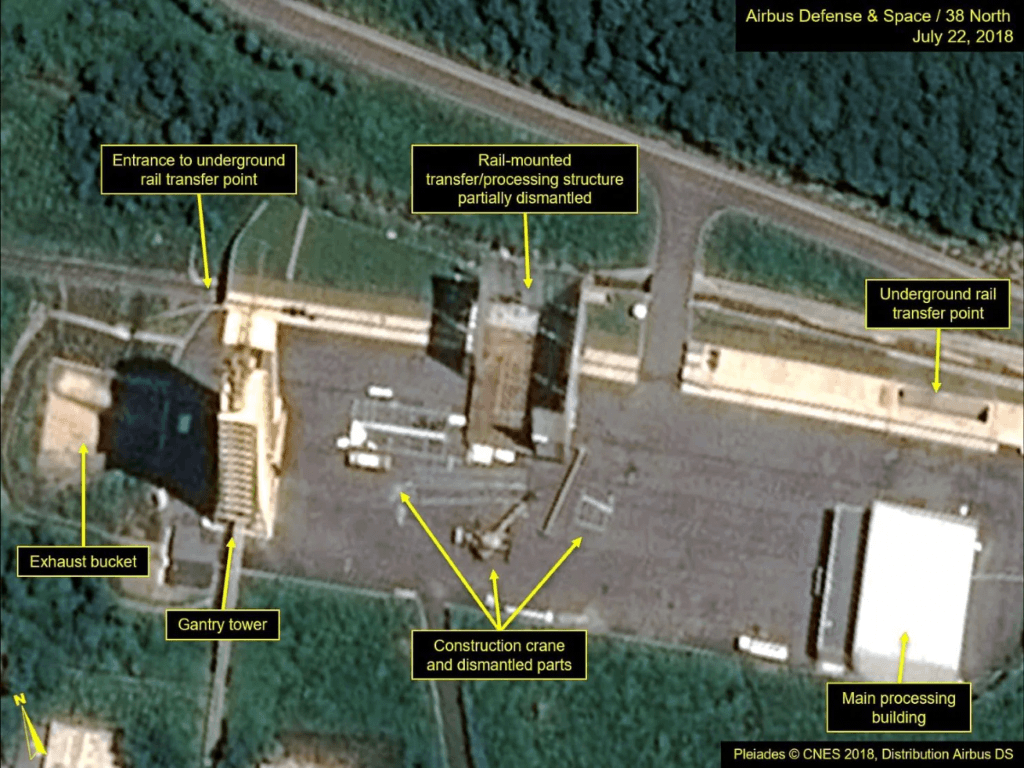 North Korea, known for its resistance of international cooperation has once again broken promises and violated sanctions. Experts in the 149 page report commissioned by the UN Security Council said,“(North Korea) has not stopped its nuclear and missile programs and continued to defy Security Council resolutions through a massive increase in illicit ship-to-ship transfers of petroleum products, as well as through transfers of coal at sea during 2018.”

The U.N report said North Korea is cooperating militarily with Syria and has been trying to sell weapons to Yemen’s Houthi rebel group. Also, North Korean technicians engaged in ballistic missile and other banned activities have visited Syria in 2011, 2016 and 2017. Furthermore, the country has also violated a textile ban by exporting more than $100 million in goods between October 2017 and March 2018 to China, Ghana, India, Mexico, Sri Lanka, Thailand, Turkey and Uruguay.

The report comes as Russia and China suggest the Security Council discuss easing sanctions after U.S. President Trump and North Korean leader Kim Jong Un met for the first time in June and Kim pledged to work toward denuclearization. On the contrary, the US and other council members have said there must be strict enforcement of sanctions until Pyongyang acts.

The U.N. experts said illicit ship-to-ship transfers of petroleum products in international waters had “increased in scope, scale and sophistication.” They said a key North Korean technique was to turn off a ship’s tracking system, but that they were also physically disguising ships and using smaller vessels. If the US intel is accurate on this matter then it indicates that DPRK has violated UNSC resolution.

The Security Council has unanimously sanctioned North Korea since 2006 in a bid to choke off funding for North Korea’s nuclear and ballistic missile programs, banning exports including coal, iron, lead, textiles and seafood, and capping imports of crude oil and refined petroleum products. The experts said that the effectiveness of financial sanctions was being systematically undermined by “deceptive practices” of North Korea.

The report also comes at a time when US Secretary of State Mr. Pompeo at the ASEAN summit said he was "optimistic" that North Korean denuclearisation could be achieved. He stressed that it was important to maintain "diplomatic and economic pressure" on North Korea to achieve "the final, fully verified denuclearisation".

The exception  is the Sohae Satellite Launching Station on North Korea’s west coast, where workers can be observed dismantling an engine test stand, honoring a promise made to Trump at the summit.

Our assessment is that the UN report confirms the skepticism surrounding North Korea’s efforts to denuclearize. We feel that by defying sanctions and cooperating militarily with Syria and the Houthi rebel group, North Korea has backtracked severely and regained its position as the troublemaker in the international arena. We believe that if North Korea’s violation of the UNSC resolution is confirmed then all UN member countries would effective immediately halt all transfers to North Korea.