The International Air Transport Association (IATA) has revealed that it is considering to declare the North Korean airspace as a no-fly zone. The announcement comes just..

The International Air Transport Association (IATA) has revealed that it is considering to declare the North Korean airspace as a no-fly zone. The announcement comes just days after crew of a passenger plane witness the nation’s latest missile launch.

North Korea has a military nuclear weapons program, and also has a significant amount of chemical and biological weapons. Since 2003, North Korea is no longer a party to the Treaty on the Non-Proliferation of Nuclear Weapons (NPT). The country has come under sanctions after conducting a number of nuclear tests, beginning in 2006.

North Korea has conducted several tests with nuclear bombs. North Korea has now claimed it has successfully "miniaturised" nuclear warheads, international experts have long cast doubt on these claims. According to information leaked to the Washington Post in August 2017, US intelligence officials now do believe North Korea is capable of miniaturisation.

In 2017, North Korea has launched 23 missiles in the span of 16 tests. It has increased its military activity since July of 2017 when it test launched two intercontinental ballistic missiles (ICBM). On 29th August, 2017, in a move that was seen as an escalation, North Korea flew a missile over Japan. It was a was a Hwasong-12 rocket and the missile was launched close to North Korea’s capital, Pyongyang. The missile reached an altitude of about 550km. It flew over Erimomoisaki on the Northern Island of Hokkaido before falling into the Pacific Ocean.

In September 2017, fired a Hwasong-12 rocket over a missile flew over Japan. The missile was fired from near the nation’s capital, Pyongyang and reportedly travelled a distance of more than 2,700km. 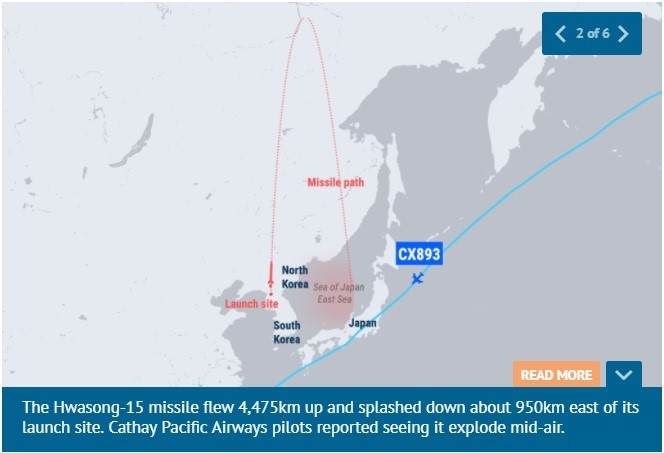 On November 29, at 2:47 a.m. local time, North Korea carried out the first-ever launch of what is to date its largest and most powerful ballistic missile, the Hwasong-15. The exact flight time of the missile was 53 minutes and 49 seconds. The missile flew to a height of nearly 4,500 kilometers on this shortened trajectory while flying to a range of 950 kilometers from a new launch site at Pyongsong. It was later reported that the crew aboard on a plane operated by Hong Kong carrier Cathay Pacific Airways had seen parts of the North Korean missile during the flight.

Cathay’s general manager of operations, Mark Hoey, said: “Today the crew of CX893 reported: ‘Be advised, we witnessed the DPRK missile blow up and fall apart near our current location. We advised ATC [air traffic control] and ops [operations] normal. Just letting you know.’ Looking at the actual plots, CX096 might have been the closest, at a few hundred miles laterally.”

The International Air Transport Association (IATA) has revealed that it is considering to declare the North Korean airspace as a no-fly zone. The announcement comes just days after crew of a passenger plane witness the nation’s latest missile launch.  The decision is being considered due to the fact a passenger carrier was able to witness parts of the Hwasong-15’s flight and thus the nation could pose a potential risk to civilians. The aviation industry’s global trade body has revealed that the decision is under consideration.

While no international flights currently use North Korean airspace, the area around it is full of activity. “The ICAO could declare a no-fly zone,” Alexandre de Juniac, director general of the International Air Transport Association (IATA), said at its Geneva headquarters on Tuesday. “We are working with the ICAO on how we can protect these zones [for] flying. The ICAO is trying to implement and ask North Korea to apply safety rules. If you look at the North Korean airspace, there are not too many aircraft overflying.”

“Through the drill, the South Korean and U.S. air forces displayed the allies’ strong intent and ability to punish North Korea when threatened by nuclear weapons and missiles,” the South Korean military said in a statement.

North Korea meanwhile has stated that war is now only a matter of time. An unnamed Foreign Ministry spokesman, North Korea is presumed to have said, “We do not wish for a war but shall not hide from it, and should the U.S. miscalculate our patience and light the fuse for a nuclear war, we will surely make the U.S. dearly pay the consequences with our mighty nuclear force which we have consistently strengthened.”

Our assessment is that the Korean peninsula could become a theater of limited conflict. What we fear most is an error in judgment.  US Senators like Lindsey Graham have already signaled their intent for war. A conflict in the region would put the lives millions at risk. Given the situation back home, President Trump may find it difficult to back down and go for a negotiation.