The southern Indian state of Kerala has reported an outbreak of the deadly Nipah virus, with 10 dead and 40 in quarantine. The virus, first identified in Malaysia..

The southern Indian state of Kerala has reported an outbreak of the deadly Nipah virus, with 10 dead and 40 in quarantine. The virus, first identified in Malaysia, is spread through infected fruit bats.

The illness is one of eight priority diseases that could cause an epidemic, according to the WHO.

The Nipah virus is a member of the family Paramyxoviridae, genus Henipavirus. The virus was first identified in Kampung Sungai Nipah village in Malaysia in 1998. In 1999, it was identified among pig farmers in Malaysia and Singapore. Flying foxes or fruit bats of the Pteropodidae Family, Pteropus genus have been identified as a primary vector of the disease. However, people can become infected through direct contact with infected pigs as well.

The virus is exhibited in different ways in humans, varying from asymptomatic infection to acute respiratory syndrome and fatal encephalitis (acute inflammation of the brain). According to the Center for Disease Control (CDC), there is an incubation period of 5-14 days, followed by symptoms such as fever, headache, drowsiness, disorientation, and mental confusion for up to 2 weeks. These symptoms can escalate into a coma within 24-48 hours. The virus mildly affects pigs; however, it can be fatal in humans. In the 1999 outbreak, nearly 300 human cases with over 100 deaths were reported. The outbreak was stopped after over a million pigs were euthanized and has not been reported in Malaysia or Singapore since.

There is no vaccine for either humans or animals, and treatment is provided through intensive supportive care. The drug ribavirin has been partly effective in laboratory settings. According to the CDC, “Passive immunization using a human monoclonal antibody targeting the Nipah G glycoprotein has been evaluated in the postexposure therapy in the ferret model and found to be of benefit.” 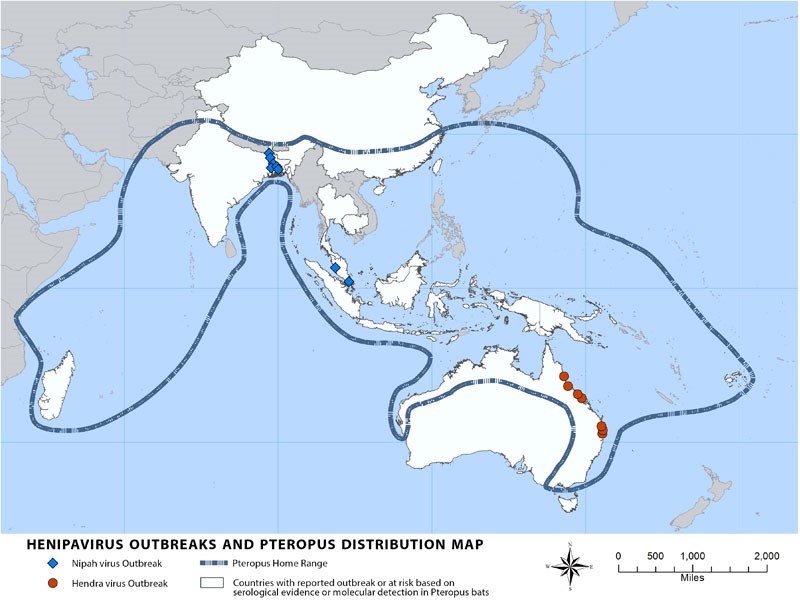 The southern Indian state of Kerala has reported an outbreak of the rare Nipah virus. The first reported death was on 18th May in the district of Kozhikode, according to the state health minister K.K. Shailaja. “This is a new situation for us. We have no prior experience in dealing with the Nipah virus,” said Shailaja. “We are hopeful we can put a stop to the outbreak.”

According to official reports, 10 out of the 12 people who reported positive for the disease have died. 40 have been put in quarantine following the deaths. Three of the victims were members of the same family, who may have been infected by bats living in a well near their home, according to state official U. V. Jose. Health officials said they had found mangoes bitten by bats near the home. Jose said that the well was closed, and the residents had been evacuated.

However, the reports of the illness have caused a flurry of concern. “A large number of people affected by fever, and even minor ailments, are swarming to hospitals, fearing they have contracted the disease. We’ve sought the help of private hospitals to tide over the crisis,” Jose said. One nursing assistant, Lini Puthussery, who died treating Nipah patients, has been hailed as a hero on social media and by authorities.

The CDC has noted that the Nipah infection can be prevented “by avoiding exposure to sick pigs and bats in endemic areas and not drinking raw date palm sap.” Additionally, it noted that awareness and education could help limit outbreaks. CDC added that further research is needed on a number of aspects of the disease. A better understanding of the ecology of the bats and investigating the possible “seasonality of the disease within the life cycle of the bats” could help control outbreaks.

Our assessment is that in the case of such infectious diseases, early detection is key. We believe that all efforts must be made by local and national authorities to ensure that the deadly virus is contained. We believe that the study of lethal infectious diseases is a necessity, particularly when these diseases disproportionately affect countries in the developing world.