The Nigerian government on Monday declared a national disaster over flooding that has affected four states – Kogi, Niger, Anambra and Delta. The declaration was made by the head of the National Emergency Management Agency, NEMA, on behalf of President Buhari. Nigeria is a federal..

The Nigerian government on Monday declared a national disaster over flooding that has affected four states – Kogi, Niger, Anambra and Delta.

The declaration was made by the head of the National Emergency Management Agency, NEMA, on behalf of President Buhari.

Nigeria is a federal republic in West Africa, bordered by Benin, Chad, Cameroon and Niger. Nigeria is often referred to as the "Giant of Africa", owing to its large population and economy. It is the most populous country in Africa, and the 7th most populated in the world. It has a diverse culture as it is inhabited by over 500 ethnic groups, the largest three being the Hausa, Igbo and Yoruba. Nigeria is divided roughly in half between Christians who live in the south and Muslims who live primarily in the north.

Muhammadu Buhari is the current President of Nigeria. He has been in office since March 2015 after three previous election defeats. He is a retired major general from the Nigerian Army and previously served as the nation's head of state from 1983 to 1985, after taking power in a military coup d'état. This period, known as Buharism, is remembered for its strict campaign against indiscipline and corruption as well as its human rights abuses. A Muslim from the northern Katsina state, he has always been popular among the “talakawa” i.e. the poor of the north.

In 2015, Buhari secured 53.9% of the votes to become the first opposition candidate in Nigeria to defeat an incumbent at the ballot box. The president has huge grassroots support. He is also known as one of the few leaders in the country's history who has been tough on corruption. In April this year, he announced his plan to seek a second four-year term, despite concerns about his age and health. 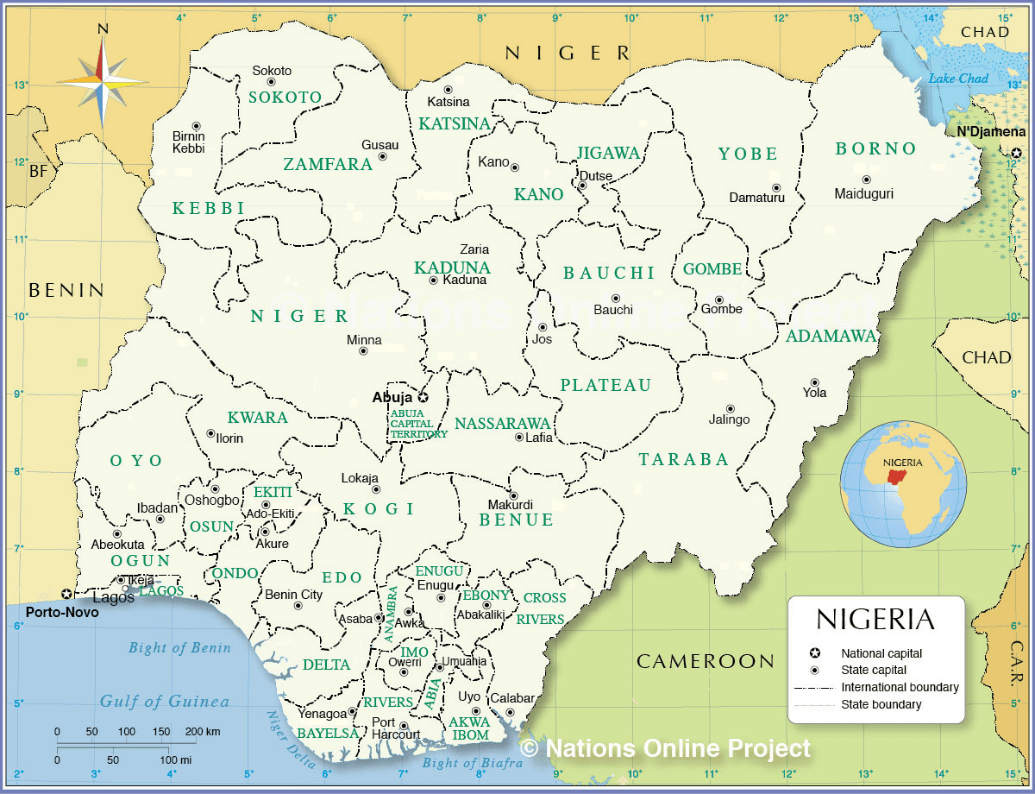 Nigeria has declared a 'national disaster' following severe floods that have left at least 100 people dead in several states across the country, officials say. Thousands of people have been displaced following weeks of heavy rainfall in some central and southern states, the country's emergency response agency, NEMA announced.

Nigeria's two major rivers have burst their banks sweeping away homes in the central part of the country. Hydrological authorities in the country had warned that with the rising levels of water in the Niger and Benue rivers, a flooding situation was to be expected.

The government subsequently allocated three billion naira (about $8.2 million) to cater for medical and relief support for persons affected by flooding in parts of the country. Parts of the country have occasionally been hit by floods leading to loss of lives and properties. NEMA has always teamed up with state governments to provide relief.

“On behalf of the Commander-in-Chief of the Armed forces of the Federal Republic of Nigeria, Muhammadu Buhari, I, Engineer Mustapha Maihaja, the Director-General of National Emergency Management Agency, hereby declare national disaster in the following states: Kogi state, Niger state, Anambra state and Delta state. Other states will be under watch as the situation continues, may I further state and announce that National Emergency Management Center, the situation room domiciled at the NEMA headquarters and five territorial emergency centers have been activated and fully on ground for effective search and rescue operations,” he said.

The agency warned that the situation could worsen as water levels continue to rise in Lokoja capital of Kogi State, which lies at the confluence of the Niger and Benue rivers and is often one of the most affected states during the rainy season. Five emergency operation centers have been created to coordinate search and rescue operations, while also providing humanitarian support for those displaced by the floods.

President Muhammadu Buhari has approved $8.2 million "for the procurement of medical and relief materials" to help flooding victims. Nigeria's rainy season usually lasts from July to September, and the country suffers from flooding almost annually. However, climate change and poor town and housing planning have worsened the situation this year. NEMA has advised residents in flood-prone areas to evacuate their homes.

Our assessment is that Nigeria will require foreign intervention in combating the flood. Nigeria’s central and southern states are susceptible to heavy rains and will require external medical, humanitarian and food supplies. We believe that Nigeria’s calls for help will be answered by its West African neighbours as well as from the WHO and MSF. We also feel that with more rainfall predicted over the next few days, the flooding may increase in intensity.