The United Kingdom and United States will soon be collaborating on one of the largest scientific expeditions to the Antarctic. Scientists will be studying the stability of the Thwaites Glacier, which could provide data on rising sea levels. It will be the largest collaborative undertaking in the Antarctic since the end of the Antarctic mapping mission in the 1940s.

Antarctica is the southernmost continent on Earth. Surrounded by the Antarctic Ocean, it is larger than both Oceania and Europe. The Antarctic Ice Sheet is the largest single piece of ice on the planet. Its size ranges from approximately from 3 million square kilometres to 19 million square kilometres. Temperatures in the Antarctic range from -10° Celsius to -30° Celsius. Antarctica plays a major role in maintaining Earth’s heat balance. The Antarctic Ice Sheet reflects solar radiation away from the Earth’s surface.

Climate change is an alteration in the statistical distribution of weather patterns when that change lasts for an extended period of time. Global warming is the observed century-scale rise in the average temperature of the Earth's climate system and its related effects. Multiple studies published in peer-reviewed scientific journals show that 97 percent or more of actively publishing climate scientists agree that climate-warming trends over the past century are extremely likely due to human activities. In addition, most leading scientific organizations worldwide have issued public statements endorsing this position.

Climate change poses a fundamental threat to the places, species and people’s livelihoods. Longer, more intense droughts threaten crops, wildlife and freshwater supplies. From polar bears in the Arctic to marine turtles off the coast of Africa, our planet’s diversity of life is at risk from the changing climate.

Rising sea levels are one of the main consequences of climate change and global warming. According to NASA, sea level rise is caused primarily by two factors related to global warming: added water from melting ice sheets and glaciers and the expansion of seawater as it warms. Satellite data has shown that that land ice sheets in both Antarctica and Greenland have been losing mass since 2002; this has accelerated since 2009. Empirical projections of global sea level rise vary widely. Projections made in 2014 for 2100 range from an increase of 0.2 to 2.0 metres. 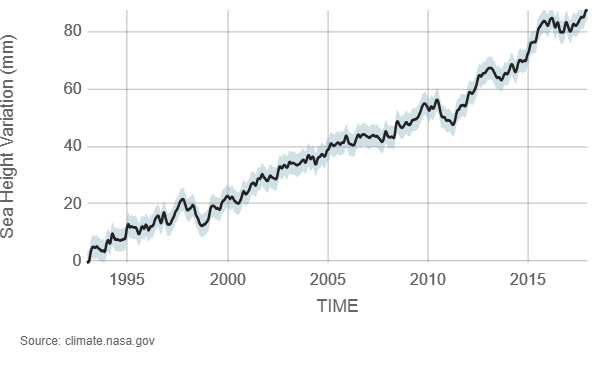 Scientists from UK and US will soon be undertaking a mission to study the Thwaites Glacier in West Antarctica. The International Thwaites Glacier Collaboration (ITGC) will investigate any potential instability in the glacier and whether it could collapse. The glacier has reportedly been retreating at 400 meters a year. Preliminary computer based research has estimated that the glacier could collapse over the next 500 years. This could lead to a rise of ocean levels by 80 cm or more. The current field expedition will help fine-tune predictions and investigate the issue.

Anna Hogg from Leeds University explained, "When we look at the historical satellite record we can see that this thinning started after 2000, spreading inland at a rate of 10-12km/year at its fastest." “Ice is only so strong, so it will collapse if these cliffs reach a certain height,” added Kristin Poinar, a glaciologist at NASA’s Goddard Space Flight Center. “We need to know how fast it’s going to happen.”

A new study released this year showed that the Antarctic ice sheet is retreating rapidly, and that Antarctica could soon overtake Greenland to become the biggest source of rising sea water. 10% of Antarctica’s coastal glaciers are in retreat. Scientists have created an underwater map of Antarctica to study the retreat of underwater ice. Studies have found that warming ocean waters have caused the base of ice near the ocean floor to shrink significantly. "West Antarctica can add an additional 4.5 meters in sea levels into the world's oceans, so just imagine what will happen to a city like London that lies at this altitude above sea level," said University of Leeds researcher Hannes Konrad.

Scientists have stressed on the global significance of this expedition. “This is critically important to all of us, no matter where we live. What happens in the Antarctic does not stay in the Antarctic. We do not know how quickly [the glacier] will contribute to sea level rises, and whether we have decades or centuries to prepare for it,” said deputy assistant director of the US National Science Foundation Scott Borg.

Our assessment is that this mission could provide valuable data on the impact of climate change in the Antarctic. We believe that rising sea levels have the potential to effect both economy and security. It could severely impact low lying island nations, particularly those in the Pacific, leading to refugee crises in neighbouring countries. This study could play an important role in determining the rate of such a rise, and preparing for different eventualities based on the findings.  As stated previously, we feel that now more than ever, the international community must commit itself to the Paris Agreement to ensure global temperatures do not rise exponentially.