Afghanistan began exports to India through Chabahar port in Iran as the landlocked, war-torn nation turns to overseas markets to improve its economy. Chabahar Port is a seaport in Chabahar located in southeastern Iran, on the Gulf of Oman. It serves as Iran's only oceanic port, and consists of two separate ports named Shahid Kalantari and Shahid Beheshti, each of which has five berths....

Afghanistan began exports to India through Chabahar port in Iran as the landlocked, war-torn nation turns to overseas markets to improve its economy.

Chabahar Port is a seaport in Chabahar located in southeastern Iran, on the Gulf of Oman. It serves as Iran's only oceanic port and consists of two separate ports named Shahid Kalantari and Shahid Beheshti, each of which has five berths.

The India–Iran–Afghanistan three-way memorandum of understanding (MoU) plans have committed at least $21bn to Chabahar–Hajigak corridor. It includes $85m for the development of Chabahar port  by India, $150m in  line of credit by India to Iran, $8bn India-Iran MoU for Indian industrial investment in Chabahar Special Economic Zone, $11-billion Hajigak iron and steel mining project awarded to seven Indian companies in central Afghanistan, and India's $2bn commitment to Afghanistan for developing supporting infrastructure including the Chabahar-Hajigaj railway. 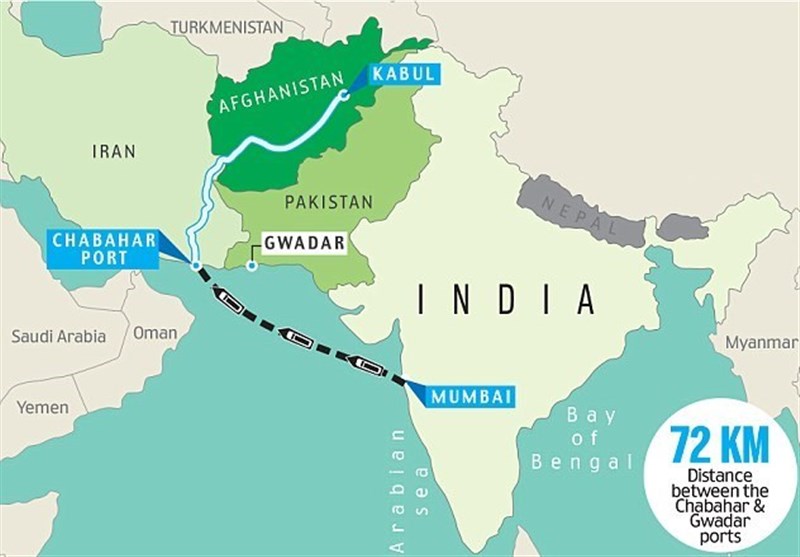 Officials said 23 trucks carrying 57 tonnes of dried fruits, textiles, carpets and mineral products were dispatched from the western Afghan city of Zaranj to Iran’s Chabahar port. The consignment will be shipped to the Indian city of Mumbai.

At the inauguration of the new export route, President Ashraf Ghani said Afghanistan was slowly improving its exports in a bid to reduce its trade deficit. “Chabahar port is the result of healthy cooperation between India, Iran and Afghanistan this will ensure economic growth,” he said. The Iranian port provides easy access to the sea to Afghanistan and India has helped developed this route to allow both countries to engage in trade bypassing Pakistan.

Last year the U.S. government granted an exception to certain U.S. sanctions that allowed development of Chabahar port as part of a new transportation corridor designed to boost Afghanistan’s economy and meet their needs of non-sanctionable goods such as food and medicines. India has sent 1.1 million tonnes of wheat and 2,000 tonnes of lentils to Afghanistan through Chabahar.

Both countries established an air corridor in 2017. Afghan exports to India stood at $740 million in 2018, making it the largest export destination, officials said. On 29 October 2017, the first shipment through the port was sent from India en route to Afghanistan. To demonstrate the viability of the route, seven shipments of wheat as aid to Afghanistan were planned to be sent by India by the end of January 2018.

On 3 December 2017, the first phase of the port construction was inaugurated by Iranian President Hassan Rouhani. Iran and India signed an agreement worth $2 billion for cooperation in the rail sector. A part of the agreement pertains to a memorandum of understanding worth $600 million for Iran to purchase locomotives and freight cars from India.

The US State Department does not currently see military cooperation between Iran and India as part of the Chabahar project, although it has cautioned India to remain within the legal parameters with respect to collaboration with Iran. The US also sees the Indian presence in greater Central Asia beneficial for spreading the soft power of democratic and friendly regimes. India hopes to see the Western countries use the Chabahar route to link to Afghanistan and reduce their dependence on Pakistan.

Our assessment is that the first export from Afghanistan using this route is a major milestone in the tri-nation, multi-billion-dollar infrastructure project. We believe that through Chabahar, Afghanistan can by-pass Pakistan’s distant ports and use the closer Iranian/Indian port for cost-effective exports