This is the first time Israel has directly accused Iran of firing towards Israeli territory.

Relations between Iran and Israel have been adversarial since the 1990s, following the 1979 Iranian revolution. Since then, the countries have engaged in proxy warfare. In 2006, reports emerged that Iran had provided aid to Hezbollah fighters (considered a terrorist organisation by Israel) during the Lebanon war. The two nations have blamed each other for terrorist attacks, assassinations, cyberattacks, and more. Israel’s role in the Syrian War has much to do with its hostile relations with Iran. A number of Iranian proxy militant organisations have been involved in the Syrian War, including Hezbollah. Israel’s air forces claimed that it had struck arms shipments to the Iran-supported militant group approximately 100 times in 2017 alone.

In 2017, Mossad chief Yossi Cohen said, "As long as the current regime exists, with the nuclear agreement or without it, Iran will continue to serve as the main threat to Israel's security.” Israeli Prime Minister Benjamin Netanyahu has accused Iran of trying to turn Syria into “one large missile factory”. Netanyahu has claimed that the Iranian Revolutionary Guards Corps (IRGC) in Syria are “building up an army against Israel with the declared aim of destroying the State of Israel.”

Tensions between Iran and Israel in Syria have increased in recent months. In February 2018, reports emerged that an Israeli jet returning from a bombing raid on Iran-backed positions in Syria was downed by anti-aircraft fire. On April 9th, an Israeli aircraft reportedly conducted an air strike from Lebanese airspace on the Iranian Revolutionary Guards Corps (IRGC) base in Syria. Seven members of the IRGC died. Tehran blamed Israel for the strikes and vowed revenge.

Russia has politically supported Syrian President Bashar al-Assad since the beginning of the Syrian conflict in 2011. Moscow offered military intervention in the civil war at the President’s request in 2015. Iran is also invested in Assad’s rule. Despite differing interests on regional matters, bilateral relations between Russia and Israel have been largely positive since Putin’s coming to office in 2000 and his interest in reinstating Russia’s role as an important player in the Middle East. Russia-Iran trade more than tripled between 2005 and 2014. At the same time, the two countries have participated in arms deals and in 2015 agreed to coordinate military actions over Syria to avoid accidental fire. 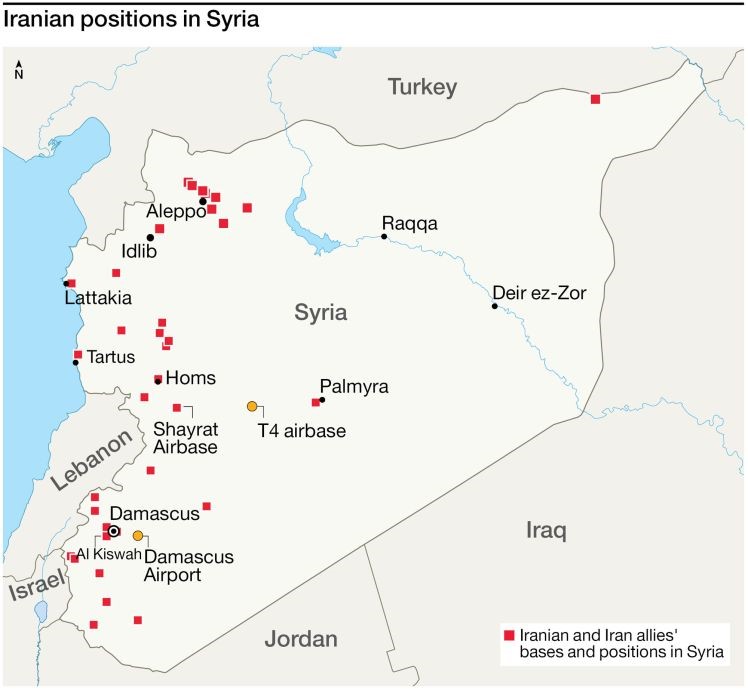 According to reports, Iranian forces in Syria have launched over 20 rockets towards the Golan Heights, a territory claimed by Israel. Israel retaliated with missiles of its own. This has been called the “most direct confrontation” between the two nations to date. The Israeli Defence Forces have blamed the Quds Force, a division of the IRGC for the fire. IDF claimed that they struck “dozens of military targets” in Syria in return.

Israeli Defence Minister Avigdor Liberman said that the situation was not an ongoing operation. "I hope this chapter is over, and everyone understands the situation, and we won't have to spend nights in situation rooms," Liberman said. Syrian-run media claimed that 2 Israeli missiles had hit an ammunition depot and radar site, and that three people were killed. Russia was reportedly informed in advance of the Israeli attack.

White House officials stated that this was “just further demonstration that the Iranian regime cannot be trusted”. Russia said that “there should be work to de-escalate the tensions.”

These attacks came as Israeli Prime Minister Benjamin Netanyahu met Russian President Vladimir Putin in Moscow. During this meeting, Netanyahu drew parallels between Nazi Germany and Iran. President Putin noted that the situation in the Middle East was “very tense”. He expressed hope that Russia and Israel would find “solutions that would lead to the easing of tensions and would allow resolving heated conflicts.”

The two leaders once more emphasised “continued coordination” in Syria. Netanyahu reportedly told Putin that Israel had an “obligation and right to defend itself against Iranian aggression, from Syrian territory.” The Israeli Prime Minister said that he had communicated this message in a “deep, thorough and serious manner.” After the meeting, he told media that he did not believe Russia would try to limit Israel's military actions in Syria.

The meeting came shortly after US President Donald Trump announced that he was scrapping the Iranian nuclear deal and re-imposing sanctions on Tehran. Moscow criticised the decision to pull out, stating that it was a “flagrant violation” of international law, and demonstrated that the US was incapable of conducting negotiations. However, Netanyahu commended Trump’s decision, calling it “brave and correct.”

Our assessment is that recent events demonstrate that tensions between Israel and Iran have reached an unprecedented high. As we have stated  previously, we believe that both Iran and Israel are standing at the edge of a larger conflict that could embroil most of the Middle East. President Trump’s withdrawal from the Iran nuclear deal adds an additional dimension to strife in the region. We believe that at this point Iran and Syria would not trust Washington to broker peace or reach a political solution to the conflict. Moscow could leverage its position in Syria to ensure that Iran and Israel do not go to war.